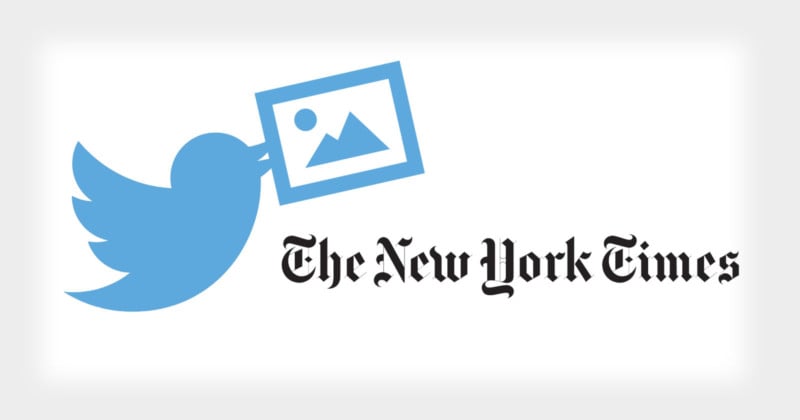 The Internet is becoming a hectic and volatile place for photographers to share their work. Social media enables photos to be put in the hands of tens, thousands, and even millions in a matter of minutes. However, one small break in this sharing frenzy can lead to massive loss and frustration for the creators that dedicate themselves to doing their passion well.


My story begins with a simple tweet. On the night of Sunday January 7th, 2018, a Falcon 9 rocket lifted off from Florida’s Space Coast, and the rocket’s first stage landed back on Cape Canaveral shortly after. I took a long exposure image of the launch and landing, and I posted my creation to my usual social media following.

DAY 372 (7/365): A Falcon 9 rocket carrying the secret Zuma payload lifted off from CCAFS this evening and landed back at Landing Zone 1 roughly eight minutes later. The launch and landing beautifully lit up the night sky on the Space Coast as @kerry_schrage, @alex_schierholtz_photography, and I took photographs from Cocoa Beach.

A day after the launch, I began to recieve word that my image was shared via a personal Twitter account along with a breaking news headline about the rocket’s status. 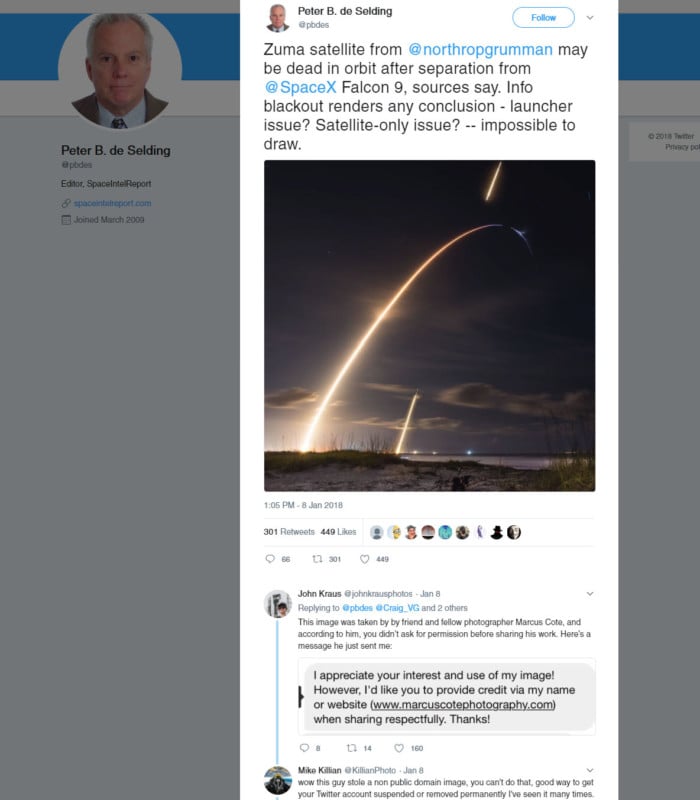 The tweet lacked any form of credit for my image and was being shared among the space news community. Whether the image was taken purposefully or accidentally is unknown, but the person responsible for the tweet offered an apology after being informed that the image was stolen.

By this point, the damage had already been done.

The nameless tweet had made its rounds among the community and eventually into an article written by the New York Times.

While the tweet was frustrating at most, seeing my image in the New York Times pushed me over the edge to take more action. I asked my social media friends and those on Reddit for advice.

The general consensus was that I needed to contact the New York Times and have the article altered to provide proper credit to all parties involved. The email response from the New York Times stated the following: “The newsroom has edited that Tweet so that the picture no longer appears within the NYT story. Thank you for alerting us.”

While this is not quite the fix I was hoping for, I am unsure about pursuing the issue any further. I would rather focus my time and energy into creating new images.

As I was writing my story, I received another email from the NY Times. The email contained a much deeper apology and explained that the image was never handled and uploaded by their photo department. They also apologized for the image being seen by a lot of eyes before being removed.

So, what are the lessons that can be taken away from this story? Always watermark your images if they relate to breaking news or high-profile topics. I have never been a fan of using watermarks for social media, but this scenario has taught me to see otherwise. A small watermark with my name, social media handle, or website would have allowed the image to be tracked along this whole headache of a process.

The second lesson is for those thinking of sharing images taken by others. Asking the photographer for permission is the polite, proper, and legal way to handle sharing. At the very least, always share the image by including the photographer’s name and/or contact information. The consequence of failing to do so can quickly cause a hardworking content creator to lose critical and deserved recognition for their work.

About the author: Marcus Cote is a 19-year-old photographer and college student on Florida’s Space coast. The opinions expressed in this article are solely those of the author. He captures photos of rockets, space, surfing, and other interesting aspects of Florida from the land, air, and sea. Ypu can find more of his work on his website, Facebook, Instagram, and Flickr.