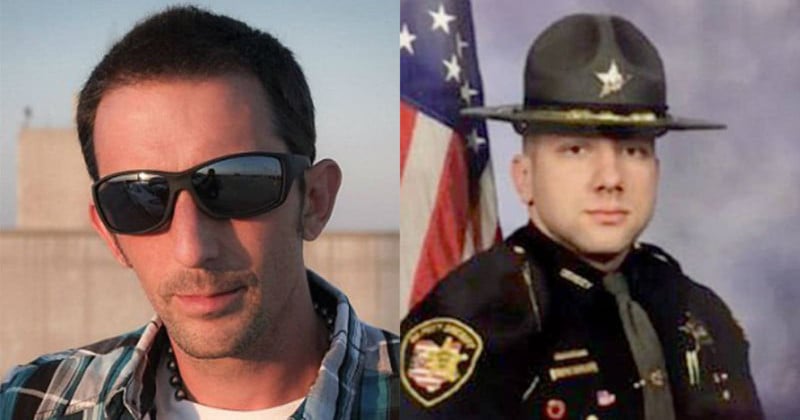 Back in September, Ohio photojournalist Andy Grimm was shot by a sheriff’s deputy while photographing a traffic stop — it turned out that the cop had mistaken Grimm’s camera and tripod for a gun and decided to shoot first and look more closely later. Grimm is now filing a civil rights lawsuit against the officer and the city.

WRGT News reports that the federal lawsuit was just filed in the US District Court of Ohio against the city of New Carlisle, the county Board of Commissioners, and Clark County Sheriff’s Deputy Jake Shaw.

On September 4th, Grimm heard about Shaw’s traffic stop at around 10 pm through the police scanner and drove over to photograph it. After parking across the street and pulling out his camera equipment from his car, Grimm was fired upon by Shaw without warning — of the two bullets fired, one grazed Grimm’s arm and the other went through his stomach.

Grimm argues that the incident, which was captured on Shaw’s body camera, was an example of excessive force. He claims the deputy was attempting to kill or seriously injure him despite Grimm presenting no danger.

The photographer is seeking seven claims for relief, including violations of the Fourth (unreasonable searches and seizures) and Fourteenth Amendment (citizenship rights and equal protection of the laws), assault and battery, failure to train, and interference with contractual relations. Grimm is asking for damages for injuries, financial losses, and deterring future incidents.

“New Carlisle or Clark County have not taken any disciplinary action against Defendant Shaw,” the lawsuit states, adding that Shaw has shown “a history of sub-standard law enforcement work.”

A Clark County sheriff’s deputy has returned to work after shooting a newspaper photographer in September. https://t.co/QPxEkjuLul

The 25-year-old Shaw was reportedly placed back on active duty in late October before Ohio had completed its investigation of the incident.

Update on 3/24/18: A grand jury has decided that Shaw will not face criminal charges in this case.

A Photo Shoot with Wonder Woman