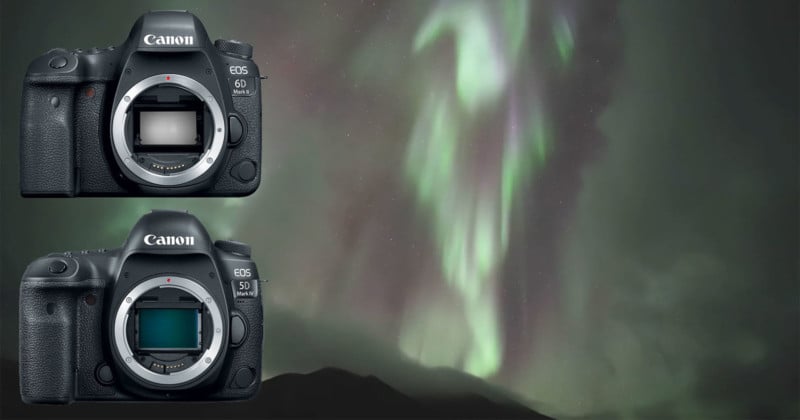 After photographing the solar eclipse in Idaho, I couldn’t resist continuing my “long-service leave” and returning to Canada’s Yukon Territory for some early season aurora hunting in September 2017. I had just two and half weeks (one New Moon cycle) based with my friends and supporters Andrea and Florian Lemphers at Shallow Bay, north of the capital Whitehorse.

I had with me a Canon 5D Mark IV and a pair of Canon 6D Mark II cameras (one on loan from Canon Australia).

Clear skies were always going to be the biggest challenge, especially during the fall, but I hit four clear nights in a row from the start so luck seemed to be on my side. I also managed to peg some beautiful cold clear nights and sweet aurora activity at clutch locations I explored along the way; my favorites being North Canol Road and Tombstone Park on the Dempster Highway.

The video files as generated are pretty noisy (applying noise reduction in-camera on the fly is presumably too taxing for the processor?) but a simple application of Neat Video temporal noise reduction in After Effects made a big difference to the viewing quality of the footage above.

Most of these clips were captured on my first night when the aurora went nuts for just a few minutes, which goes to show you have to be prepared and ready to roll from the start! There’s no doubt that pushing ISO to the max and applying heavy noise reduction softens the image crispness, but being able to show the aurora in real-time (how crazy is that!?) is still pretty cool.

I did also capture some live 4K video but the combination of the 1.7x crop factor and significant reduction in maximum allowable ISO speed meant the results weren’t as impressive. However, with the extra pixel detail noise reduction performed very well on these files. If I had another two weeks and some more brilliant aurora displays I’d definitely play with the 4K feature again with a super-wide lens to compensate for the 4K crop-factor.

One of the selling points of the Canon 6D Mark II has been the 4K timelapse video feature and I was very keen to experiment with this under the Yukon’s Northern Lights. I’m used to capturing RAW file sequences and rendering them, but there is a lot to be said for the fun and efficiency of capturing direct to 4K timelapse in-camera. (The 4K file is available to download and view via Vimeo — highly recommended for best quality).

When I wasn’t shooting 4K, I captured 2.5 TB of RAW timelapse images with my four cameras in just over two weeks. That creates such a headache in terms of data storage and processing power that I haven’t even started editing that footage yet.

In contrast, editing this 4K video from the 6D Mark II required nothing more than throwing the clips together in Premiere Pro with just a slight brightness/contrast tweak for some punch. No noise reduction has been applied to the files out of the camera. It was a lot of fun capturing these clips in and being able to see the timelapse video result on camera immediately. Motivation in the field like that really helps keep you going while your fingers freeze at 2 am in the morning!

The bright and fast sequences in this video were captured at 1 frame per second, the fastest the camera allows in 4K timelapse (resulting in footage 25 times real speed). Some of the quieter moments I was capturing at 1 frame every 2-3 seconds as longer exposures per frame were required. Again super-fast Canon and Sigma ART lenses were critical to the outcome.

There is also an auto-exposure feature in the 6D Mark II timelapse settings intended for day-night transitions which I thought may be helpful for adjusting to the rapidly varying brightness of aurora displays. In practice, I found it easier and more reliable to use fixed exposure but I’d experiment further with this feature if I had more time — it is surprisingly hard to concentrate on details like this when the aurora keeps fading and then pulsing back into action around you without warning.

P.S. Thanks to my talented friend, cellist and composer Kristin Rule for the music and my hosts Andrea and Florian Lemphers whose support made all of this possible.

About the author: Phil Hart is an engineer by day and astronomy and night sky photographer by night. Phil Hart has been enjoying and photographing the night sky for nearly twenty years. His award winning photos have been published in books, magazines and popular websites around the world. He is the two-time winner of the David Malin Astrophotography Award and author of the Shooting Stars eBook. He has previously run Night Sky Photography Workshops in partnership with Michaels Camera Store in Melbourne. You can find more of his work on his website. This article was also published here.