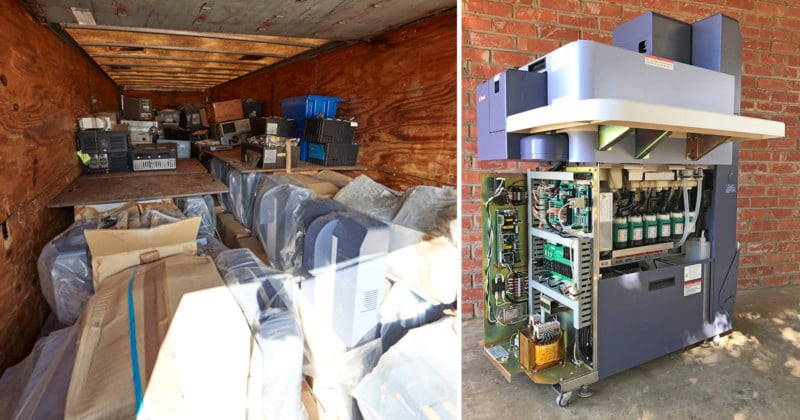 Imagine finding a truck full of brand new 35mm film processing machines. That’s what happened two weeks ago, though the reality of what we found has taken a few days of research and a lot of Googling to understand. Let me explain…


An old friend of mine has been in the salvage business for 20 years. He and his business partner recently bought a new property, and as part of the deal, they also assumed ownership of all the industrial salvage items on the lot. That included 15 semi-truck trailers full of industrial salvage and scrap, some of which turned out to be pretty interesting.

This particular friend is a hobbyist photographer and knows just enough to be dangerous when it comes to cameras, so when he uncovered a machine with “Kodak” on it, he was instantly intrigued. Imagine his surprise when he kept moving scrap electronics out of the way and ended up finding an entire trailer full of what appeared to be brand new machines, all with the Kodak name on them.

This is where I came in. I’ve been shooting commercially for ten years, and I assisted full time for five years before that. I even did a stint working at a local pro lab, so I have some basic knowledge of photo processing. When my friend called I was immediately interested in seeing what he had discovered and headed out to meet him first thing the next morning.

Walking out into the football field-sized lot full of salvage items, he pointed me to the trailer and I hopped in, quickly sizing up what looked to be a full truck of brand-new, palletized C41 film processors. About three-quarters of the length of the truck had plywood boards on top of the machines, and there were bins of electronics on top of the boards — over 100 total, each weighing 50-plus pounds! 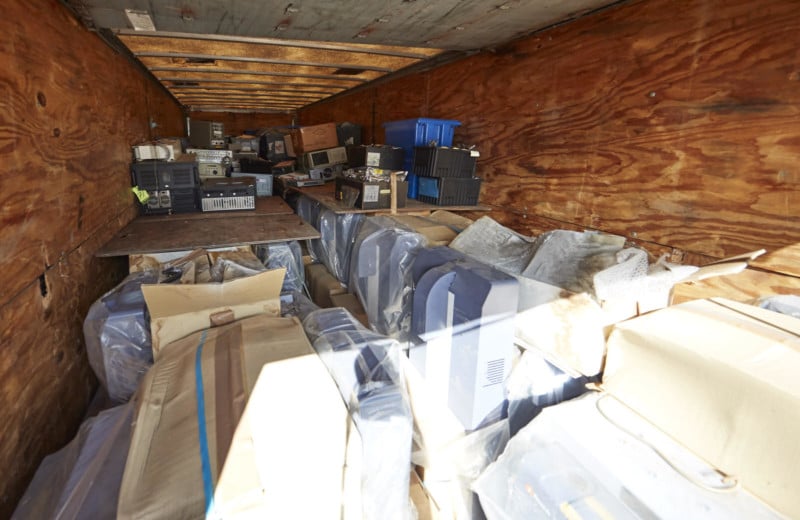 After a lot of sweat, a little blood, and the better part of a long day, the truck was empty of plastic bins and the only thing left in it were two beautiful lines of indigo-colored machines, about 30 in all. Most were still on their pallets with spare parts boxes strapped to them, original shrink wrap in place, just like they would have left the factory. 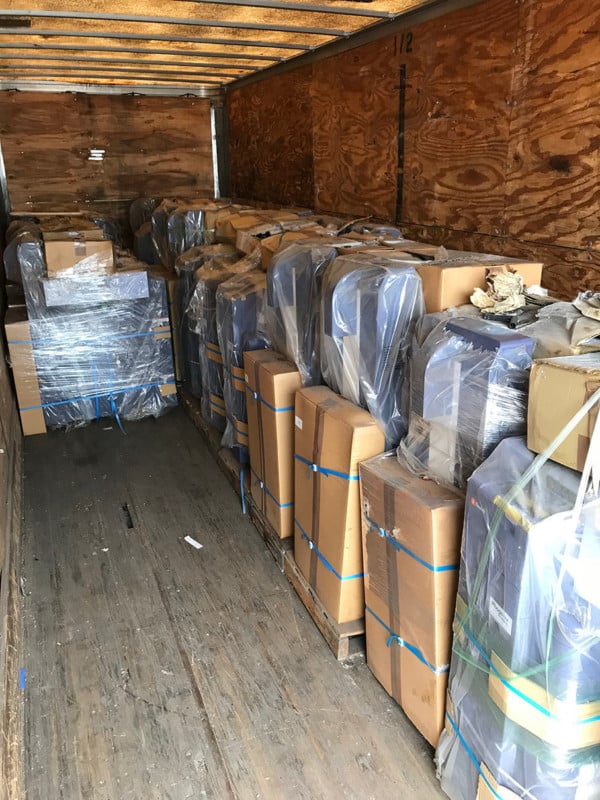 I did a quick inventory, took a few photos, and then headed home to clean up and get some rest. The next day started with a deep dive into Google. The machines were marked “Phogenix Imaging – A Joint Venture of Kodak and HP”. Scanning old news articles, the pieces quickly started to fall into place; HP and Kodak got together in 2000 to form Phogenix here in San Diego, with the goal of producing an inkjet minilab. By 2002, they had working test units in several camera shops on the East Coast, as well as in one camera shop in San Diego (Bob Davis Camera in La Jolla, which is coincidentally where I bought the first lens for my first SLR, a hand-me-down Nikkormat FT2, in the mid-1990’s).

By early 2003, it seems that Phogenix had taken orders for a handful these inkjet minilabs at a starting price of $40,000 apiece. Then, just a few months before the first units began to ship to customers, Kodak and HP appear to have had a falling out, and the entire project was scrapped, the company dissolved, and some or all of the minilabs apparently sold as surplus. 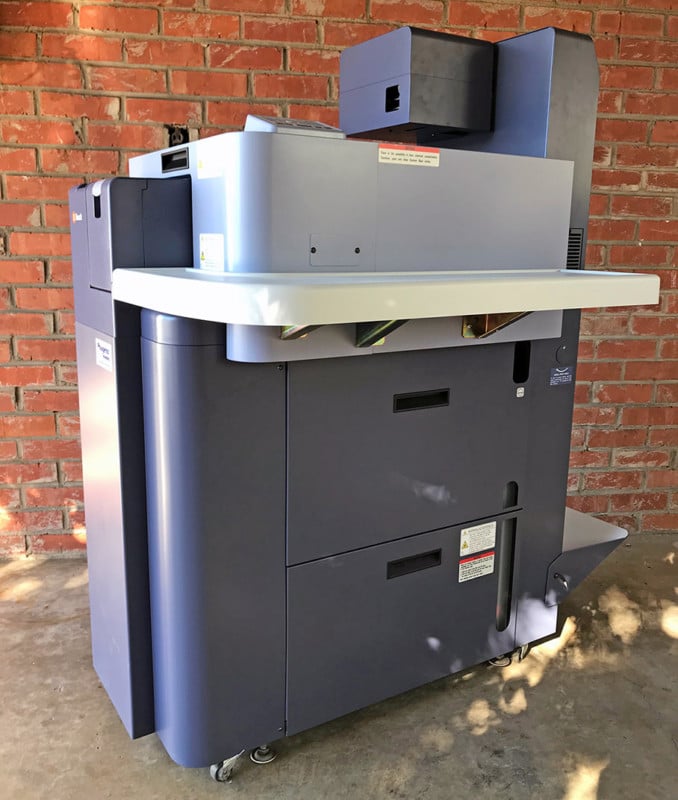 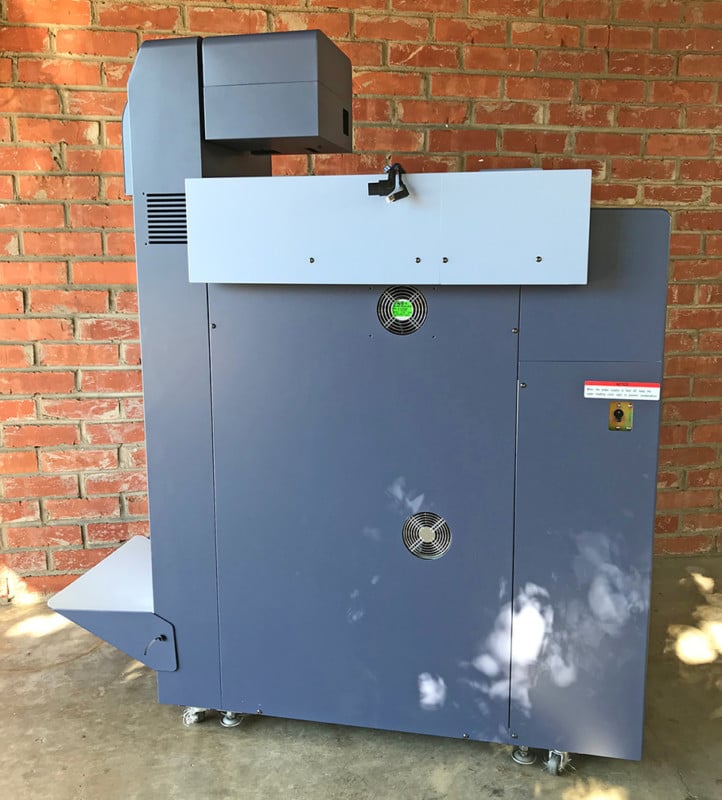 As best I can tell there were three modules to each machine: The C41 film processing module (known as the “One-Touch Film Processor”), a digital storage/management module with a monitor that would have been the “terminal” to control the image workflow (adjustments, send to print, burn to disc, etc.), and finally a printing/cutting module.

Interestingly, there doesn’t seem to be any sign of the image management modules, scanners, or any printers, which is just as well. The image management module and scanner units would be interesting to use but would potentially need some sort of license codes or server connection (to a now-nonexistent server) to work properly, and the printing modules would need proprietary inks and papers…and assuming any of those were stored 15 years ago, they’d definitely be junk by now!

On balance, I think that these thirty or so C41 35mm film processing units that we have are the most useful of the three components. So far I’ve gone through about a third of the machines and the internals look just like the day they left the factory. 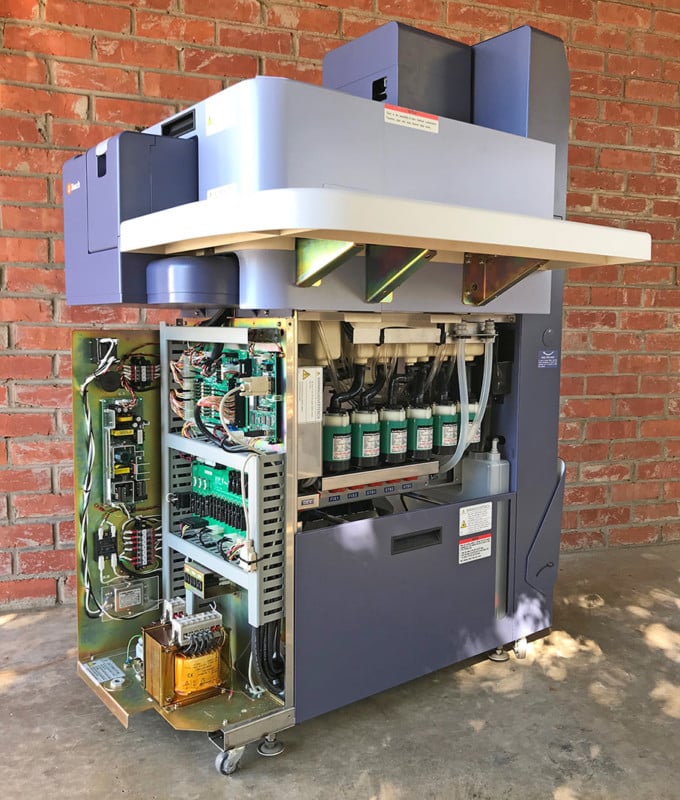 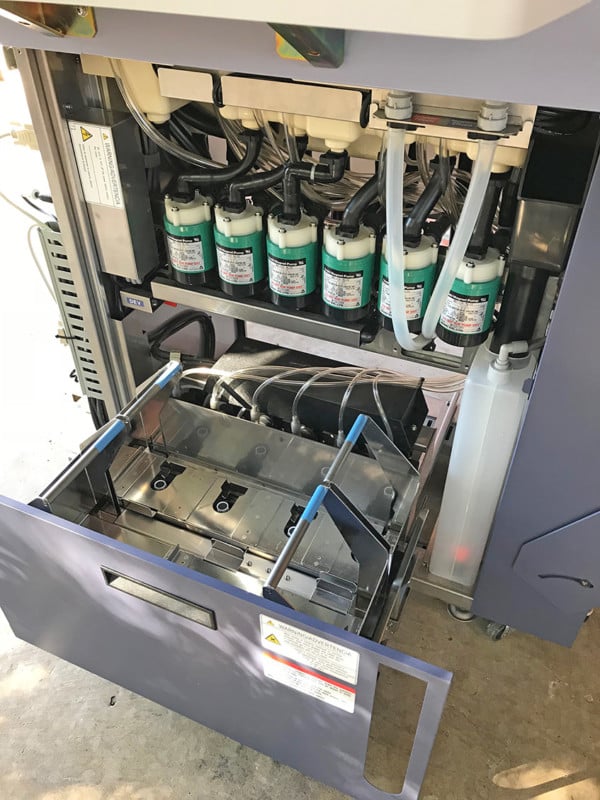 I’m certainly curious about the fate of the digital management modules and the print modules, but it seems that as far as standalone usability, these are the components which are going to be the most functional on their own. I’ve just got my hands on a set of chemistry for the machines, so hopefully the first machine (pictured here) will be operational by the end of the year. Conveniently, December and January are traditionally slower months for architectural and food photography so I’ve got plenty of free time. 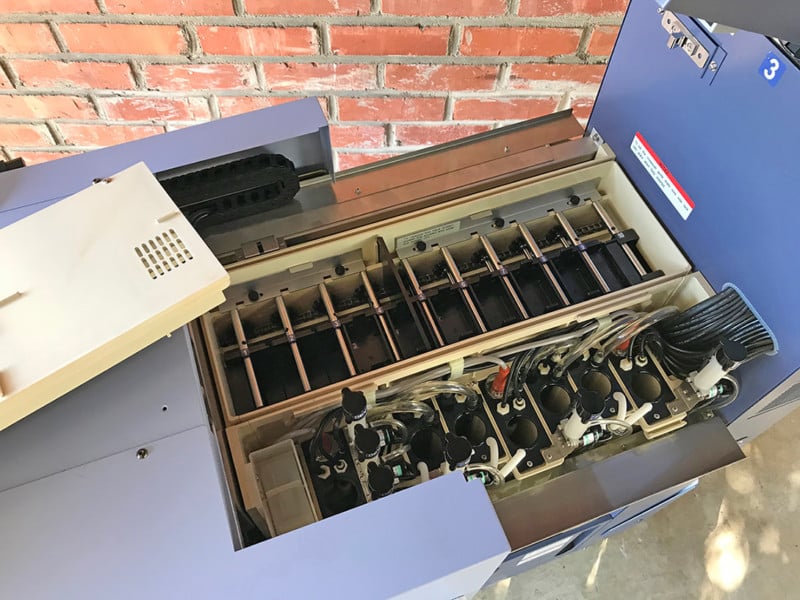 Once I start working through the machines to get them all up and running, I can start to find them new homes. Hopefully, these machines will be a viable alternative to film shooters otherwise spending $10,000 or more on an old, beat-up C41 film processor.

From my perspective, I spent my middle school and high school years shooting countless rolls of film, first as a hobby and then as the photographer for my high school newspaper. Digital photography came into my world about my sophomore year of high school in 1999, when the newspaper got its first Sony Mavica (writes straight to a 3.5” floppy disk!). Before we transitioned to digital at school, though, I developed plenty of black and white film in the darkroom and still have binders of prints and negatives stored away.

When I graduated high school and started assisting, we were shooting 4×5 film for architecture and 120/220 for catalog and fashion shoots. I have fond memories of long days on set, dropping film at the lab late that night and picking up firsts in the morning on the way into the studio. We’d review the transparencies on the lightbox and call in the balances — plus 1/2, minus 1/4, and so-on. I developed a great rapport with the guys and girls at my local pro lab, who I would later go on to work for occasionally when they needed extra help.

Though I haven’t shot much film myself since we joined the digital bandwagon in 2005, there’s definitely a feeling of nostalgia in it for me. My hope is that these machines will be up and running for a long time to come, helping to prolong the usable lifespan of film as a medium, because I still believe it’s the best way for young artists to develop the eye needed to become good photographers, even in the digital era.

If you happen to have any more info on Phogenix, I’d be interested in hearing from you. I’ve reached out to several former employees to get more of the story on the company. Perhaps, even though the scanner and printer modules of these units are probably long gone, a little bit of the company’s history can live on with these C41 processors.

About the author: Ben Carufel is a commercial photographer based in San Diego, California. Hospitality has been the primary focus of his fifteen years in the industry, serving diverse clients such as five-star hotels and internationally recognized restaurants. He occasionally gets to shoot product and lifestyle images, though he’s yet to find a way to safely combine his three biggest passions: photography, motorcycles, and beer. You can see his work on his website or follow his motorcycle and beer-infused adventures on Instagram.