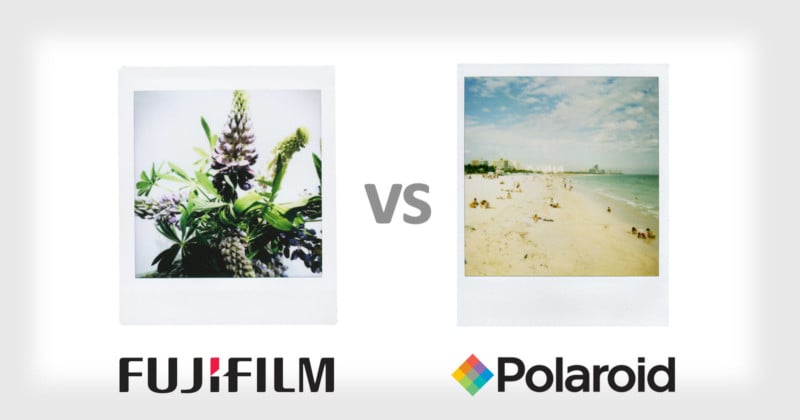 Fujifilm has filed a legal complaint in the US, accusing Polaroid of turning against the company and demanding millions of dollars in royalty payments per year for the use of its white borders on its new Instax Square instant film. Polaroid is allegedly threatening Fujifilm with a trademark lawsuit if it doesn’t comply.

World IP Review reports that Fujifilm filed the complaint on Monday in the the US District Court for the Southern District of New York.

Fujifilm says PLR IP, the brand licensor and marketer for Polaroid instant cameras, sent it a letter back in January after Fujifilm unveiled its new square format Instax film, which looks strikingly similar to the classic look popularized by Polaroid years ago.

In the letter, Polaroid said that the “square form” of Fujifilm’s Instax Square photos is “essentially identical” to the trademark and trade dress rights owned by Polaroid — Polaroid owns a number of trademarks that give it exclusive use of certain white borders on instant photos.

Then in March, Polaroid sent a followup letter to Fujifilm, threatening it with a lawsuit unless the Instax Square film was pulled from the market. Polaroid wrote that it would have “no choice but to take appropriate action to protect” its intellectual property if Fujifilm ignored its demands.

Finally, Fujifilm says it received a third letter in June that demanded millions of dollars per year in royalty payments. Fujifilm says in its new legal complaint that Polaroid is trying to milk its IP portfolio after failing to make money through selling actual products.

“Unable to return to profitability through product sales, defendants now seek to generate revenue from what remains of the Polaroid IP portfolio,” Fujifilm’s complaint says.

Fujifilm is now asking the US courts to rule that its “square with a square” instant photos do not violate Polaroid’s IP rights and to cancel Polaroid’s trademarks.

(via WIPR via The Phoblographer)

This Photographer Burned Photos by Igniting Gunpowder on Them