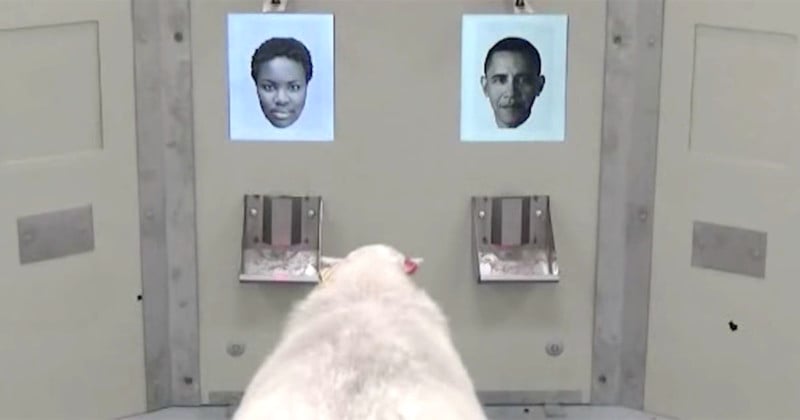 Sheep can recognize human faces in photos at a level that’s comparable to humans. That’s what scientists discovered through testing sheep by showing them celebrity portraits.

Researchers at Cambridge University led by neurobiology professor Jenny Morton conducted the study by leading 8 different sheep one at a time into a research barn and showing them a photo of one of four celebrities: Barack Obama, Emma Watson, Fiona Bruce, and Jake Gyllenhall. The sheep were given food to create an association.

Next, the sheep were taken into the barn and shown two photos. One was a celebrity it had seen before, and one was a photo of a non-celebrity who looked similar and had the same gender and ethnicity.

Tapping on the “correct” portrait would reward the sheep with food while choosing the wrong face would result in no food and a sound being played.

The sheep were able to pick out the celebrities and earn the food reward 8 out of 10 times.

To challenge the sheep even further, scientists showed them the same celebrities in photos captured from a different, tilted angle. The sheep were still able to choose the correct person, showing that they weren’t simply memorizing what a 2D photo looks like, but instead were understanding the 3D idea of a human head.

“This ability has previously been shown only in humans,” the scientists write. “Sheep successfully recognized the four celebrity faces from tilted images.

“Together these data show that sheep have advanced face-recognition abilities, comparable with those of humans and non-human primates.”

Here’s a short video showing the experiment in action:

The research findings were just published in the Royal Society Open Science.

(via The Royal Society via Newsweek)

VSCO’s Recipes Let You Share Photo Editing Formulas with Others

Pete Souza Looks Back on 1.9 Million Photos of Obama