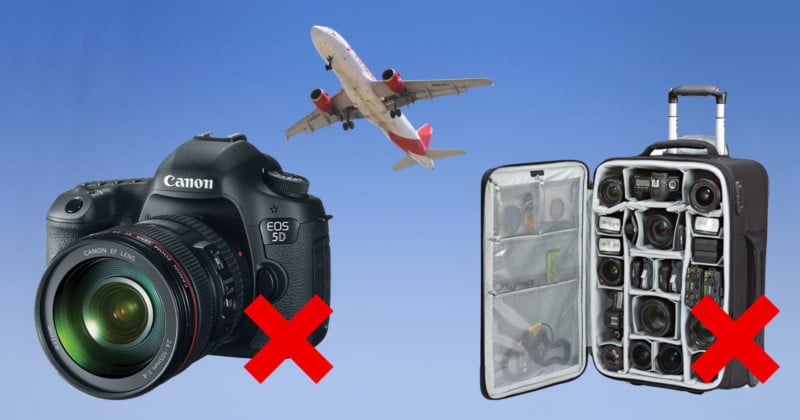 The U.S. government is urging airlines around the world to ban cameras, laptops, and other large personal electronic devices from checked luggage, citing the risk of batteries causing catastrophic fires.

The Chicago Tribune reports that the recommendation was made in a paper that was recently filed with the International Civil Aviation Organization (ICAO), an agency that’s part of the U.N.

The FAA conducted tests that involved placing a heater against a fully-charged laptop’s lithium-ion battery, causing the battery’s temperature to continually rise. The agency found that overheating batteries and aerosol cans in close proximity to one another can cause fires and explosions in less than a minute — events that could bring down a passenger plane.

“[I]t was concluded that if a [portable electronic device] is packed in a suitcase with an aerosol can and a thermal runaway event occurs, there is the potential for an aerosol can explosion,” the FAA writes. “The explosion itself may or may not be strong enough to structurally damage the aircraft, but in a Class C cargo compartment it will most likely compromise the Halon fire suppression system […]

Batteries packed with other permitted items such as rubbing alcohol, hand sanitizer, and nail polish remover also caused large fires. These fires can burn up to 1,100 °F (594 °C), close to the melting point of aircraft aluminum, and are responsible for 3 cargo jet crashes and 4 pilot deaths since 2006, the Associated Press says.

As a result of these findings, the FAA is recommending that electronics larger than a smartphone should be banned from checked luggage unless they’re specifically approved by the airline. Other major agencies and companies, including the European Safety Agency (the FAA’s European counterpart) and Airbus, agreed with the recommendation.

The ICAO is responsible for creating global airline safety standards, which may then be adopted by member countries and airlines. This proposed ban will be considered during an ICAO meeting within the next two weeks.

Here’s the full paper and proposal that was submitted by the FAA:

If the ban goes into effect for international flights around the world, it could cause issues for photographers who need to transport large amounts of camera equipment in checked baggage. One possible solution, however, might be to separate your lithium-ion batteries from your cameras and equipment and bring them into the cabin with you in carry-on baggage.

Transporting camera equipment on flights has become much more regulated in recent years due to safety and terrorism concerns. The US temporarily banned cameras in the cabins of planes from a number of Middle Eastern countries earlier this year, and the TSA recently started requiring a separate screening of cameras in security lanes.

(via Chicago Tribune via Gizmodo)