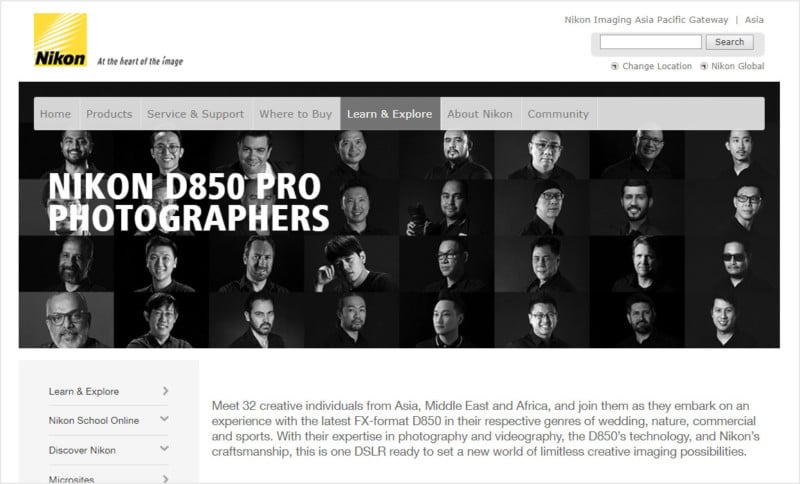 Nikon is being criticized this week for its selection of pro photographers promoting the new D850 DSLR in Asia, the Middle East, and Africa. Take a look at the professional photographers in the lineup, and you’ll see 32 men and zero women.

We began receiving tips on this discrepancy from photographers two days ago, and we’ve been reaching out to Nikon for comment.

“It’s a nice glaring omission of females in this D850 Pro Group,” one well-known professional photographer — a Canon shooter — tells PetaPixel. “They should be blasted.”

Fstoppers then set off a firestorm of controversy yesterday by publishing an article titled: “Is the Nikon D850 for Men Only?”

“But when Nikon created a team of 32 professional photographers to be the faces of the Nikon D850, they didn’t choose a single woman photographer,” writes Jason Vinson of Fstoppers. “When building a list of 32 photographers, you basically have to go out of your way to not include a single woman.

“The problem here though is not just with Nikon, but instead with the entire photo industry.”

Hey Nikon: are you planning to release a version of the D850 for women? A pink one, maybe? #everydaysexism https://t.co/BJAtFO2t9e pic.twitter.com/NoVsqEzJ6Q

Beyond upset #nikon no women Pro's? as a female pro that's invested in Nikon equipment/20years, no females-Really? #nikond850 I'll test it! https://t.co/g58oAKLqOk

"Or is the D850 in fact for men only and @Nikon plans to release a pink and sparkly D850w for women to use?" @vinson83 @fstoppers #diversity https://t.co/u7xy2cIaBe

Hey Nikon—Women are professional photographers too. Pretty phenomenal ones at that. This is not acceptable. https://t.co/5wKRunN2sU pic.twitter.com/O7we5QscU6

This story and controversy were soon picked up by CNN:

Nikon is under fire for hosting an advertising event that featured 32 men and 0 women testing its new camera https://t.co/QeKKNhNGLw pic.twitter.com/XsHzaroR3F

While the Nikon representative we spoke to hasn’t provided a statement or response yet — we’ll update this post if one is sent — Nikon Asia did respond to the controversy by posting a statement to its Twitter account:

Thank you for sharing your thoughts with us. We really appreciate the support from our photography community. pic.twitter.com/e78qp4Q08a

Nikon says it did invite women to be a part of this promotional group, but that none of them were able to join.

“Unfortunately, the female photographers we had invited for this meet were unable to attend, and we acknowledge that we had not put enough of a focus on this area,” Nikon Asia writes. “We want to thank the community for raising this and challenging us to do more to support the creative talent of our female photographer community.”

In North America, photographer and Nikon Ambassador Dixie Dixon has been prominently promoting the D850 alongside photographer Joe McNally.

“Nikon did not respond to questions about how many women were invited,” CNN writes. “Nikon said in its most recent annual report that only 10.6% of its employees are women. It has set itself the goal of boosting the share to 25% by 2021.”

Update: Here’s a statement we just received from Nikon USA:

At Nikon, we champion all passionate photographers. Women are an integral part of the photography community and we are dedicated to celebrating any talented storyteller and their work. We appreciate you raising this concern and we will continue to support the immense creative talent of female photographers in the US and globally.