Cop pulled a gun on me tonight for asking a question. #ferguson

By now we all know that the stories of media/police confrontation from Ferguson, MO have two sides. On the one hand, seemingly unnecessary arrests of major photojournalists had even the President of the United States condemning that officers’ actions. On the other, a photojournalist on the ground explained why he was embarrassed by the way the media is acting in the area.

And yet, it’s hard to imagine there being a good reason why, on a relatively peaceful protest day, a police officer answered a journalist’s seemingly innocent question by pulling and pointing a gun at him.

According to the NPPA — whose general counsel, Mickey H. Osterreicher, has filed a formal letter of complaint and request for an investigation with all three police departments who have officers deployed in the area — photojournalist Raffe Lazarian simply asked the police officer, “which way do I need to go in order to get to the media area?” 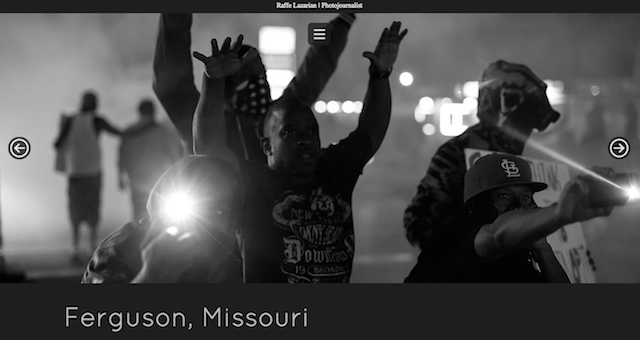 What happen next is perhaps best described by Osterreicher himself:

In contravention of all known and accepted firearms policies, the officer drew his weapon and pointed it at Mr. Lazarian in a threatening manner and then used it to gesture in the direction he wanted him to go.

“Pointing a lethal weapon at someone without provocation goes far beyond creating a chilling effect on First Amendment rights,” continued Osterreicher. “It is unfortunate that some officers do not understand or respect the Constitution which they swore to uphold.”

This comes days after a viral video showed a St. Ann Police Department officer pointing a semi-automatic assault rifle at a peaceful protester and threatening to kill him. That officer was suspended from duty indefinitely as of yesterday. It’s safe to say Osterreicher and the NPPA would like to see the same thing happen in this case.