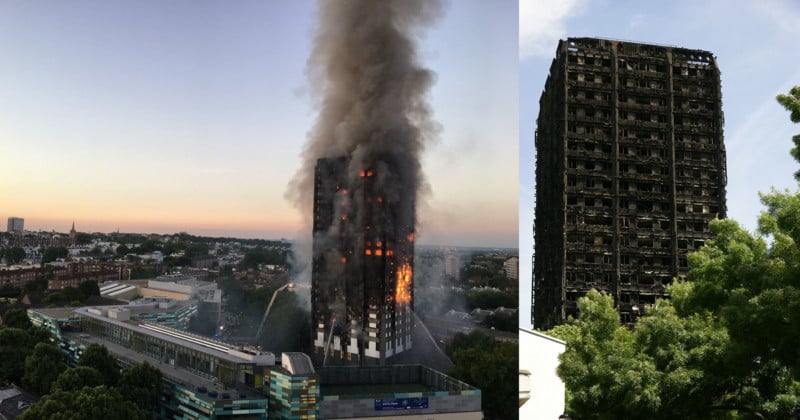 London police and authorities are working to prevent selfies from being taken at the charred remains of Grenfell Tower, and barriers were erected last week to block out the estimated two million people who would be passing through the area for the annual Notting Hill Carnival.

Grenfell Tower was a 24-story residential building that saw a major fire on June 14th, 2017. The fire killed at least 80 people (including photographer Khadija Saye) and sparked protests over government housing policies. Much the dismay of residents of the area, the site became a popular destination for selfies shared on social media.

People Are Taking Selfies At Grenfell Tower And Residents Are Not Ok With It https://t.co/DbU03M5pP0 pic.twitter.com/OxxKqjtFPG

This sign placed under the Westway this morning. Its kind of depressing that this even needs to be said.#Selfies pic.twitter.com/lNOU9SEJxL

LBC reports that both the Met Police and Transport for London were taking action to stop “grief tourists” from visiting the building for photos and selfies.

Police & TFL are putting up barriers & extra staff around Grenfell during #NottingHillCarnival to stop ppl taking selfies. More on @LBC at 7 pic.twitter.com/A1x1YonFKg

In addition to the barriers blocking off nearby streets, extra police officers were also deployed this weekend to ensure that only residents could enter the immediate vicinity.

Transport for London has also been setting up barriers around the rail lines and keeping trains on platforms for longer to minimize opportunities to view and photograph the tower.

(via LBC via Fstoppers)

How It Was Shot: A Climber and a Total Solar Eclipse