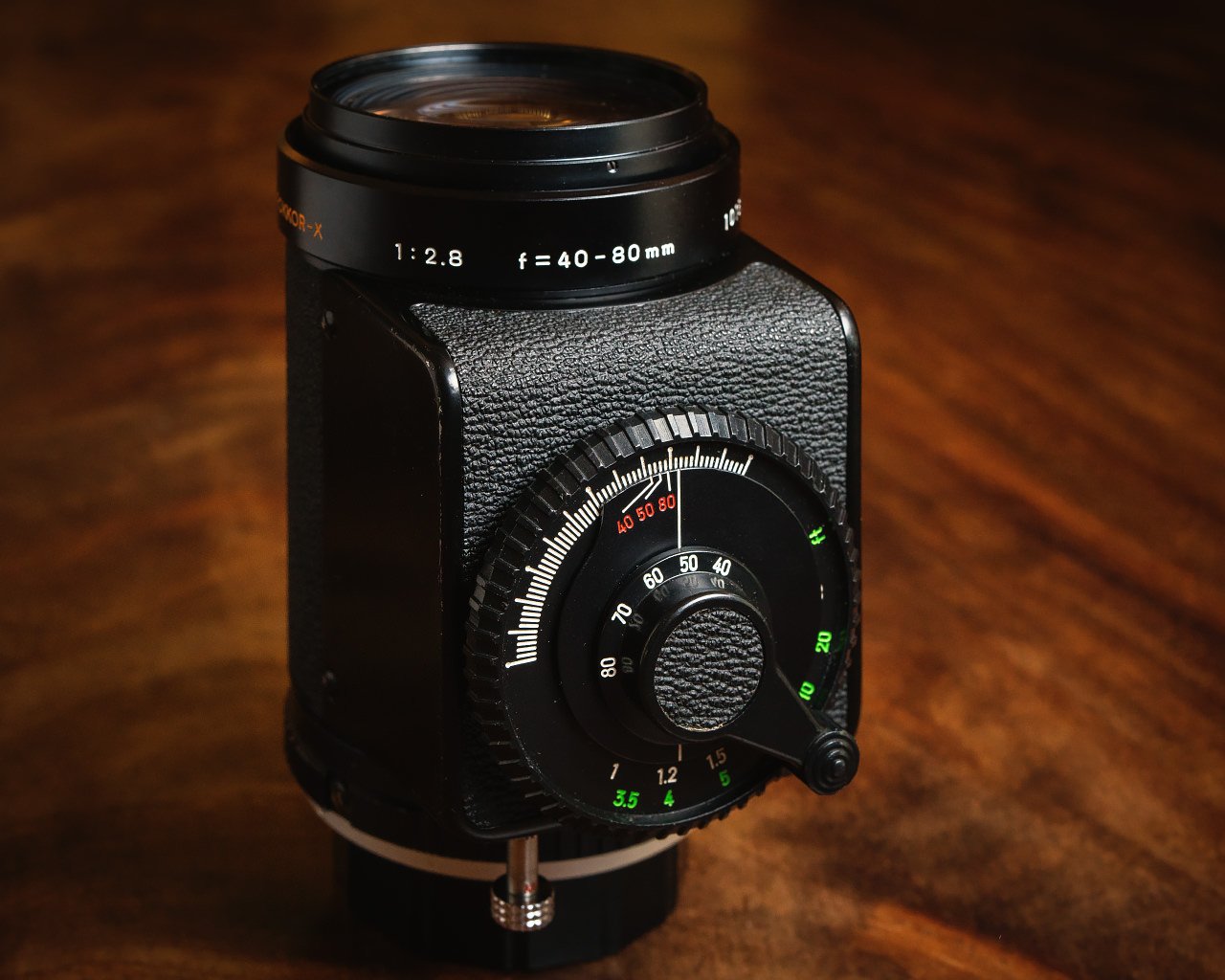 For a few years now, I’ve had in my collection one very strange lens. I bought it primarily for its value as a collectible so, up until now, I haven’t really spent much time playing with it. Made in 1975, this manual focus Minolta MC Rokkor-X 40-80mm f/2.8 lens is one strange puppy.

When it was first introduced, no other zoom lens could top its image quality and it really didn’t have much competition until more recent years. This is largely due to its very unique gearbox design that sought to overcome the problem with zoom lenses that we still face today.

Way back in 1959, the first commercially-available 35mm still camera zoom lens, the Bessamatic-mount Zoomar 36-82mm f/2.8, was released by Voigtlander. Its mechanical design would not be unfamiliar to you since the focus and focal length were adjusted via a few round-turns of the lens barrel. This simple helicoid design remains the only common method manufacturers use to make our lenses zoom in and out and focus.

When you twist the zoom/focus ring(s) of a lens, the optics are carried forward or backward through a threaded barrel. This design results in a fixed movement ratio of the optical groups mounted inside that helicoid.

The problem with this is every focal length requires a slightly different adjustment of the lens element/group spacing to properly correct aberrations, and the fixed ratio of a helicoid cannot provide that kind of variance. The helicoid is relatively simple, easy to make, and its shape tailors to a fitting physical design of a lens. If a lens were designed to have as few compromises as possible, it might look vastly different from what we see sitting on store shelves.

For simplicity though, manufacturers have stuck with the helicoid and instead invested in overcoming its mechanical shortfalls with optical solutions. Over the years, lens designers, aided by computers, have learned how to improve the optical designs of the zoom lens to work around most of the limitations of the locked-ratio helicoid. Modern zooms still aren’t quite as good as a prime lens but, with aspherical lens elements and fancy coatings to help out, they’re getting pretty darn close.

Back in the early 1970s, Minolta’s engineers, armed with their slide rules and cigarettes, had a go at thinking outside the box to come up with a lens design that would allow for precise positioning of the optical groups in a zoom lens. What they came up with was so clever that it required they put it inside a box — a gearbox, to be precise.

Rather than work with the limitations of a helicoid design, this clever bunch decided to abandon that whole concept and create a new one where lens groups would be blessed with the freedom to move independently of each other. They came up with this unorthodox gearbox design that drives 12 optical elements in 12 separate groups along linear, gear-operated rails. With the chains of fixed-ratio movement cast from them, the entire lens design could be “geared” for precise positioning of the optics to best correct for aberrations throughout the range of focal lengths.

What they did was figure out how to make a handheld zoom lens that is as well corrected across its range of focal lengths as a fixed focal length lens would be at its one — that’s the theory, anyway.

In spite of the weird and wart-like appearance of their solution, Minolta’s engineers achieved with this lens something that is truly unique and special. There is no mistaking this lens for any other, that’s for sure.

Focus is adjusted by turning the big wheel while focal length is controlled by moving the lever arm. Both controls are very smooth and easy to move across their fairly short range of motion. The focus wheel features a precise distance scale with Infrared Index. 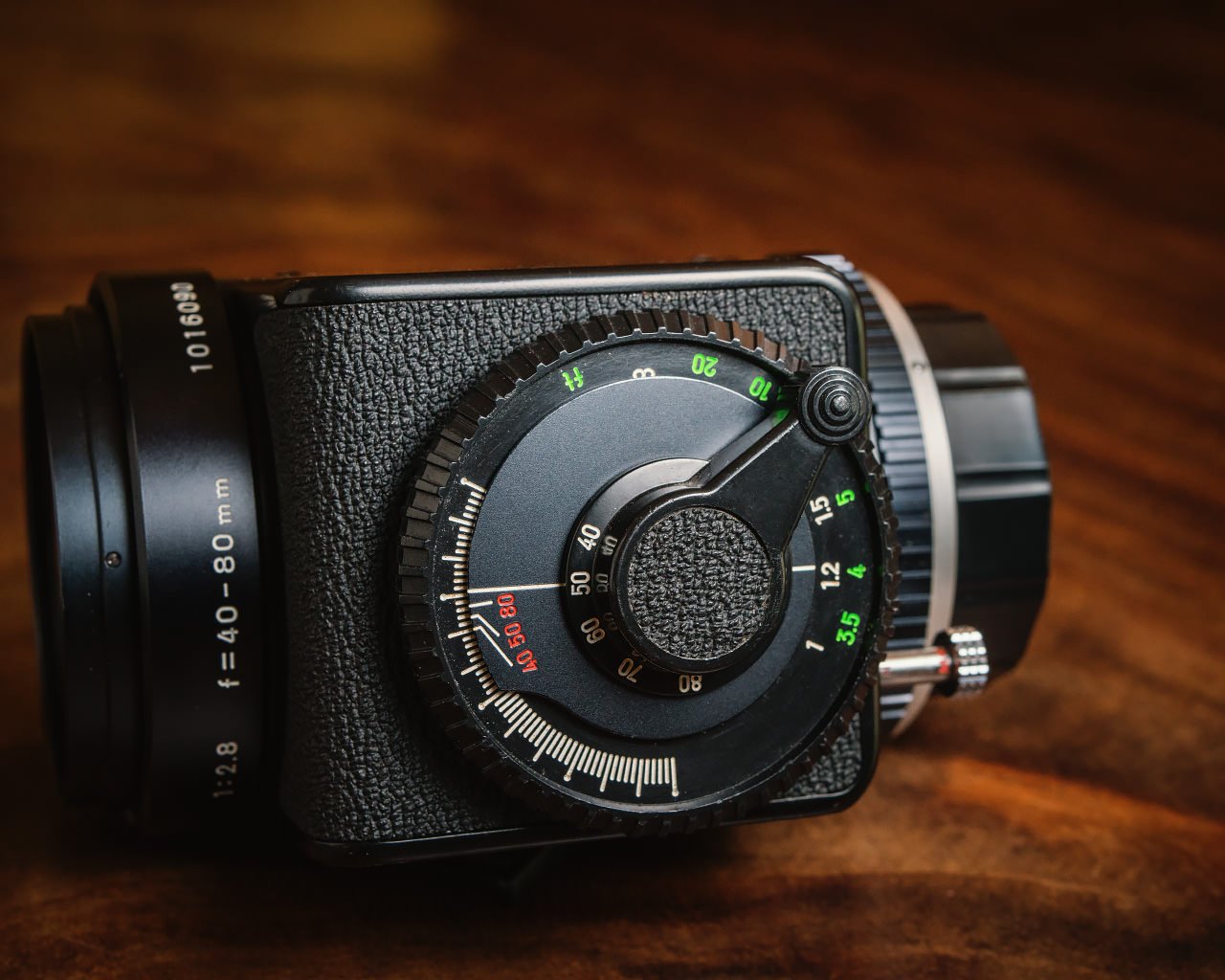 The lens has a 55mm diameter coated front element. Here you can see the profile of the gearbox which is fixed to the left-hand side of the lens body. 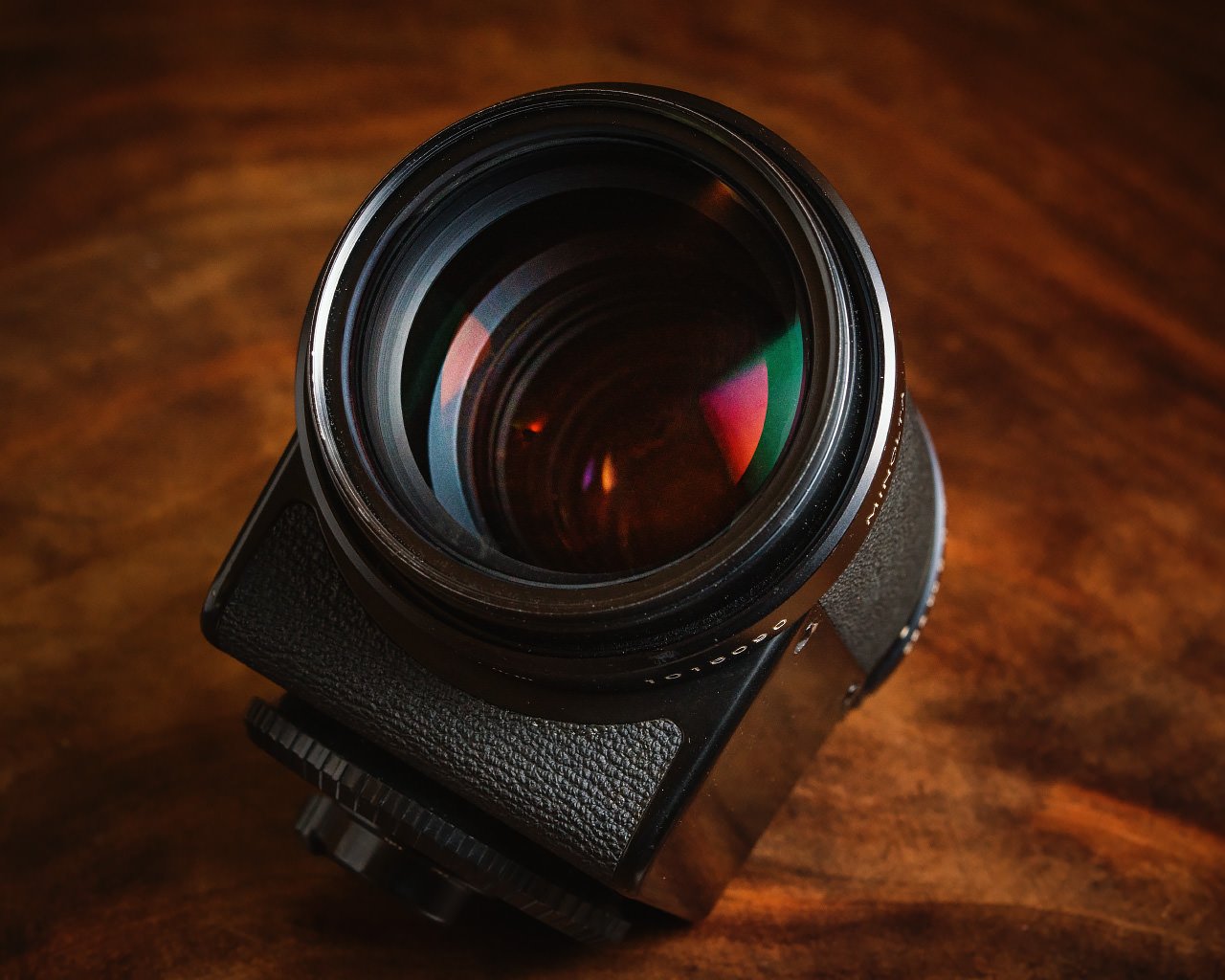 Did I mention it has a macro mode? The lens has a metal stem poking out of the gearbox which, when twisted anti-clockwise and pushed in, shifts everything inside the lens out toward the front, essentially putting more space between the film/sensor plane and the rear element (same thing an extension tube does). The result of this forward-shift is a reduction in the Minimum Focal Distance from 3.3 ft (1.01 m) to 1.2 ft (.37 m) @40mm.

In this image, the stem is in its Normal position 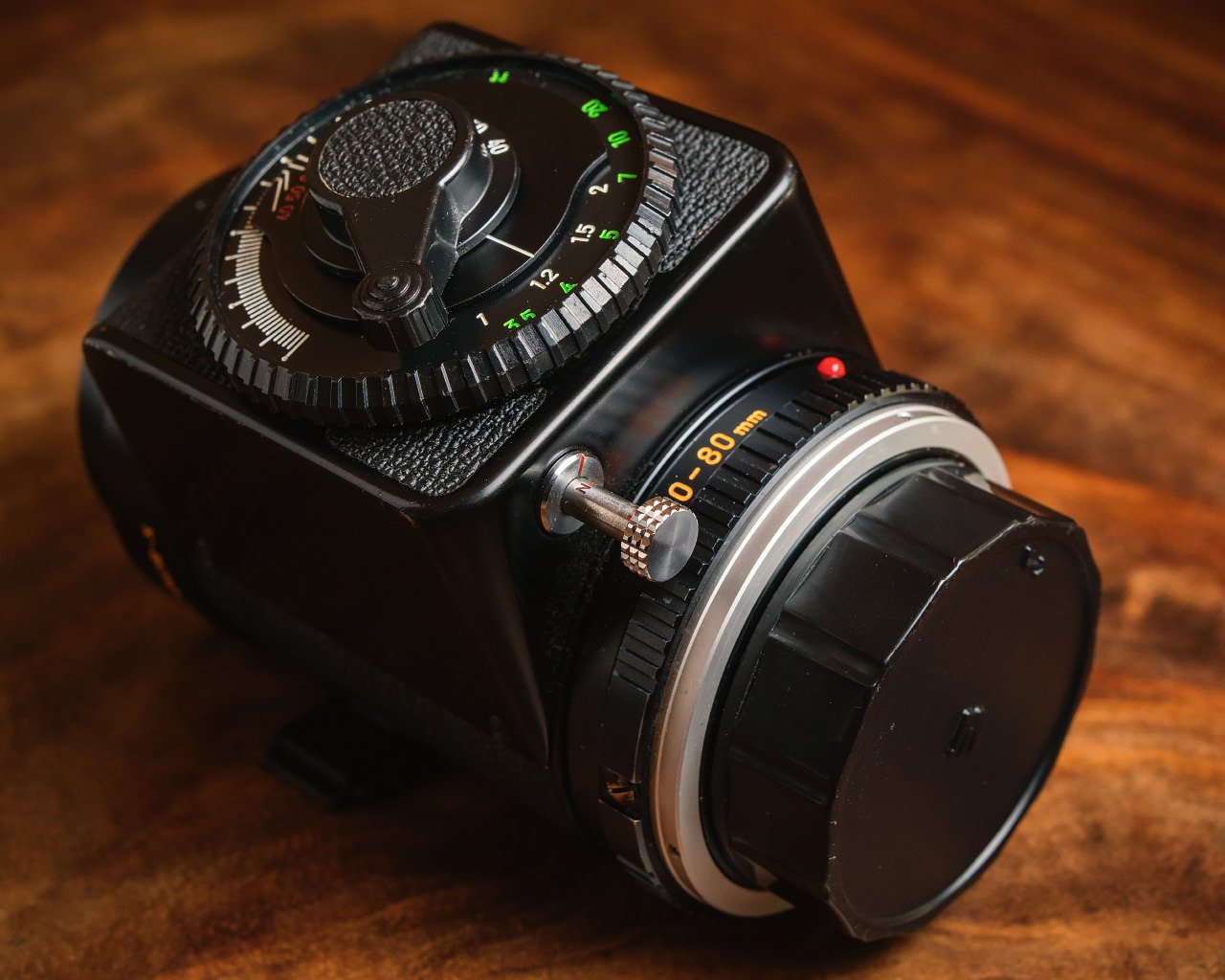 Here, the stem is shown in the Macro position. When pushing in this stem, the focal length lever shifts forward with the internal glass. What a cool, whacky design! 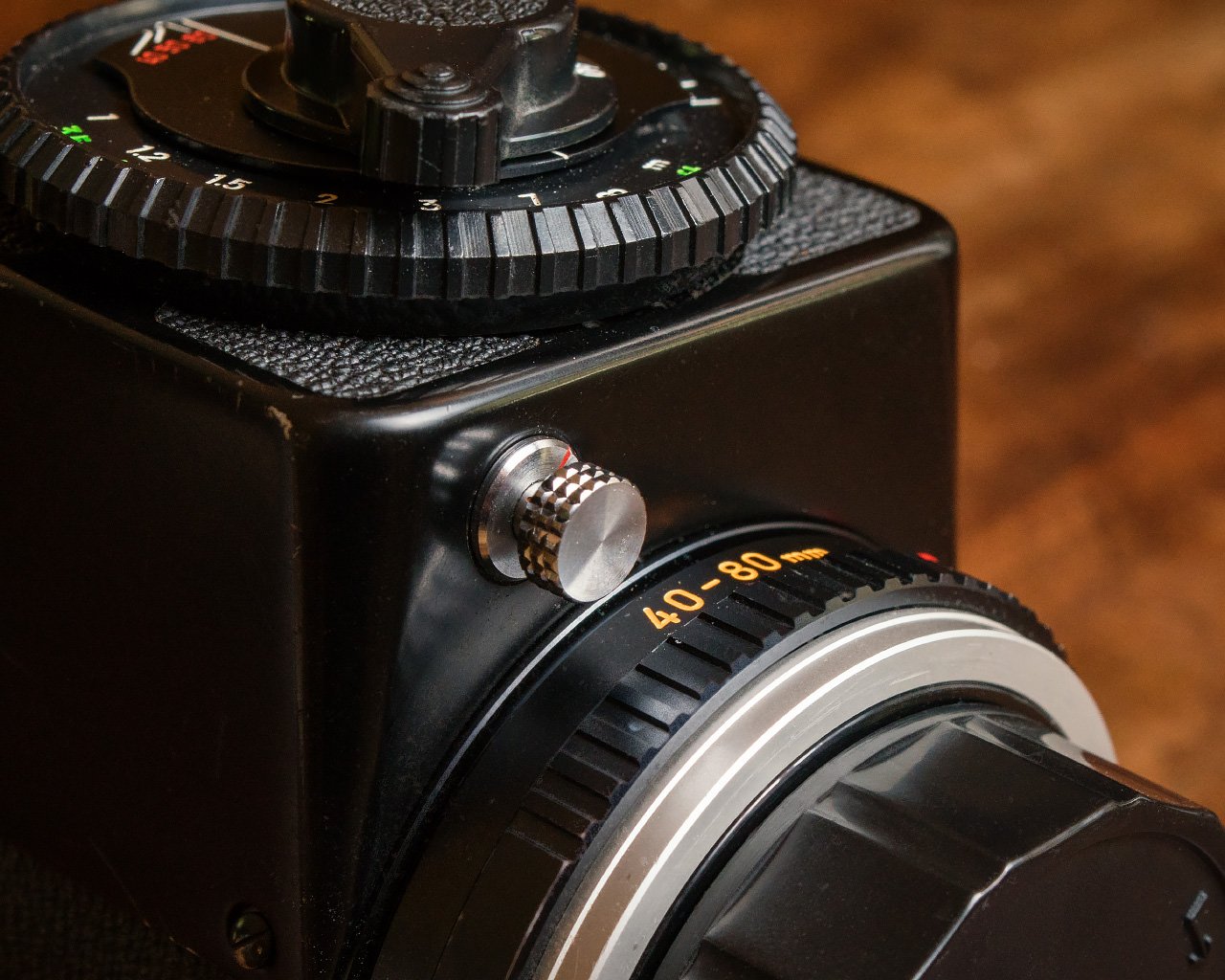 Let’s see how well all of the engineering effort translates into actually making images with this lens.

My sister told me about this row of old silos that sit alongside a two-lane road not too far from where I live. Yesterday, I had to go by it while I was on errands. On the return trip, I pulled over for this shot. I had the lens set to 40mm and the aperture was wide-open at f/2.8 on a Sony a7R Mark II. This was the first shot I took and I kind of hurriedly grabbed it because of the unique lighting. That isn’t vignetting in the grass. Passing over head was a thick, dark cloud that cast the strangest light over this scene. No sooner I had shot this and the sun was back out in the open. 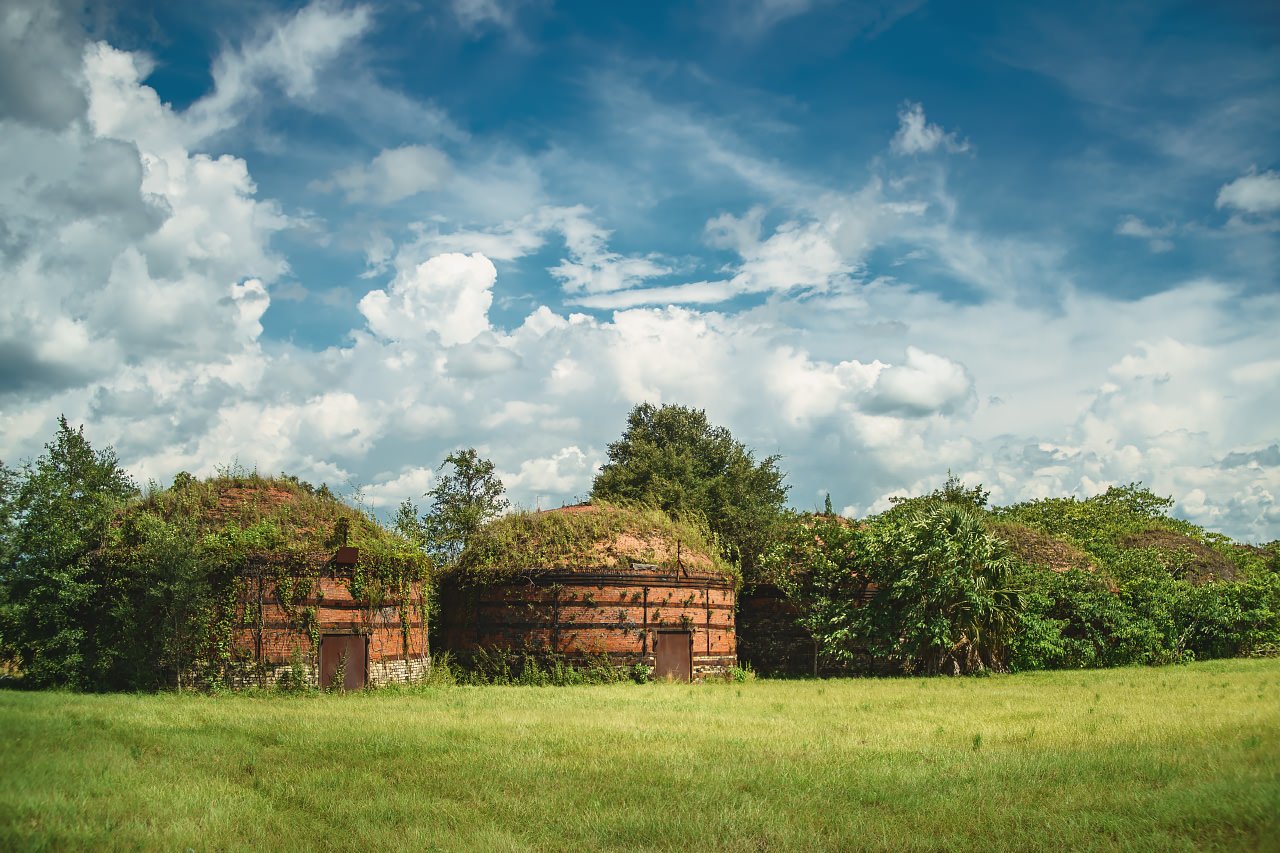 On the same errand run, I came across this old Chevrolet police car. Focal length was 80mm @ f/8. 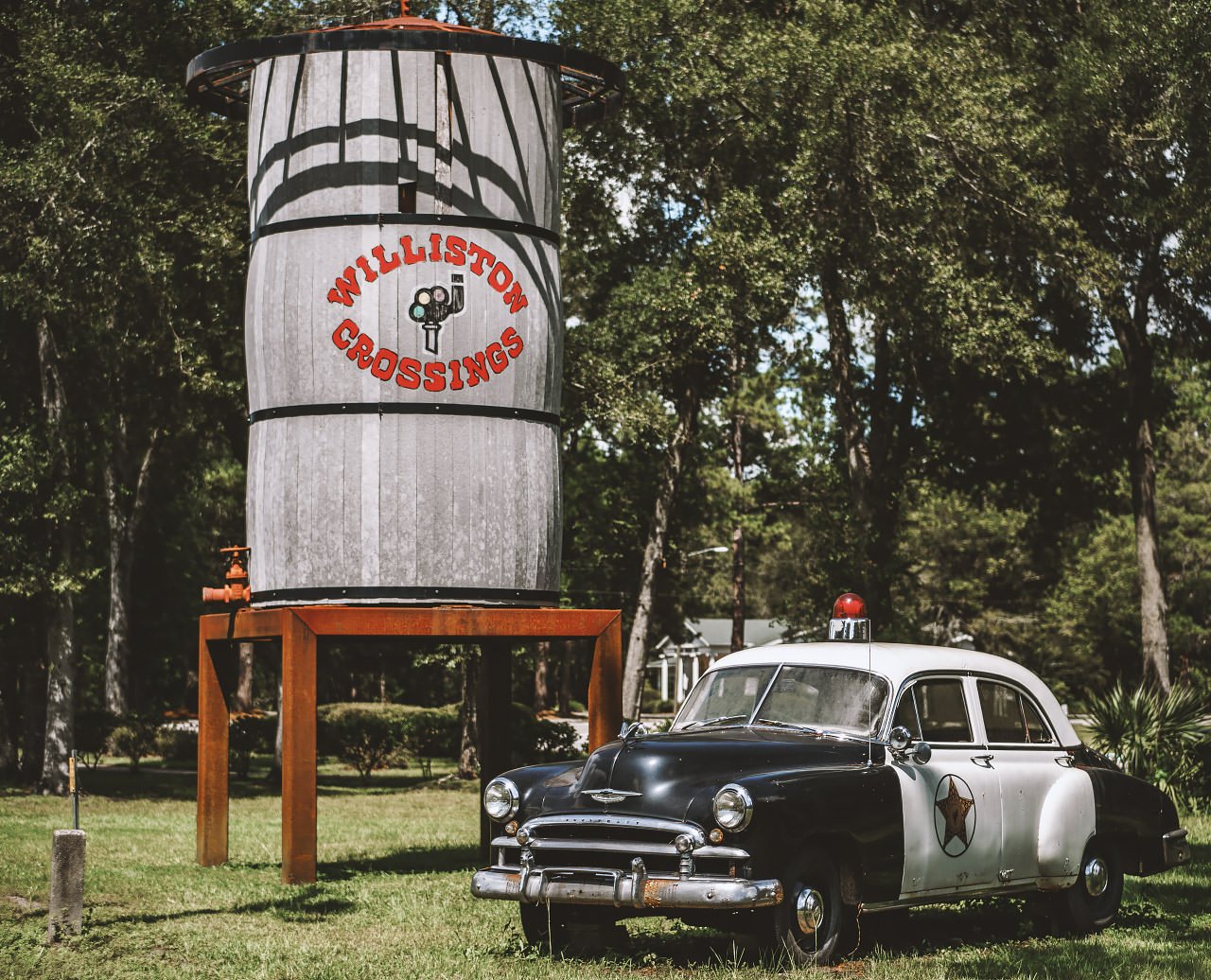 I was very interested to see how well the lens would control chromatic aberrations when shooting this brightly lit chrome. I’ve not used a pre-1980s zoom lens that didn’t produce some purple-fringing in a shot like this. Kudos to Minoltas engineers because there was none. Zoomed 400% in the 42-megapixel RAW file I could see nothing but bright chrome and colorful rust. 80mm @ f/4 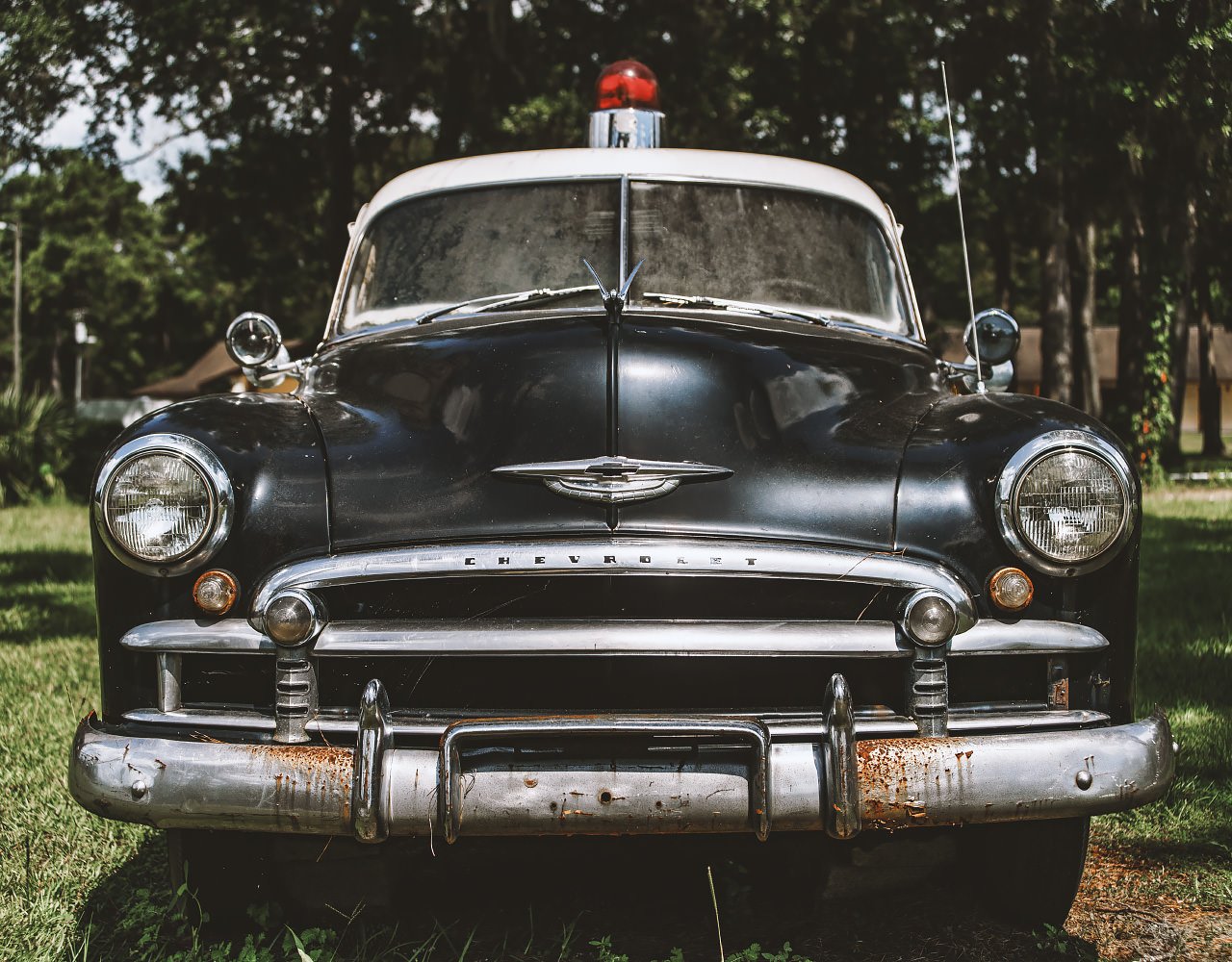 The Jelly Palm in our front yard is full of fruit this time of year. I shot this with the lens’ Macro mode enabled. 40mm @ f/2.8 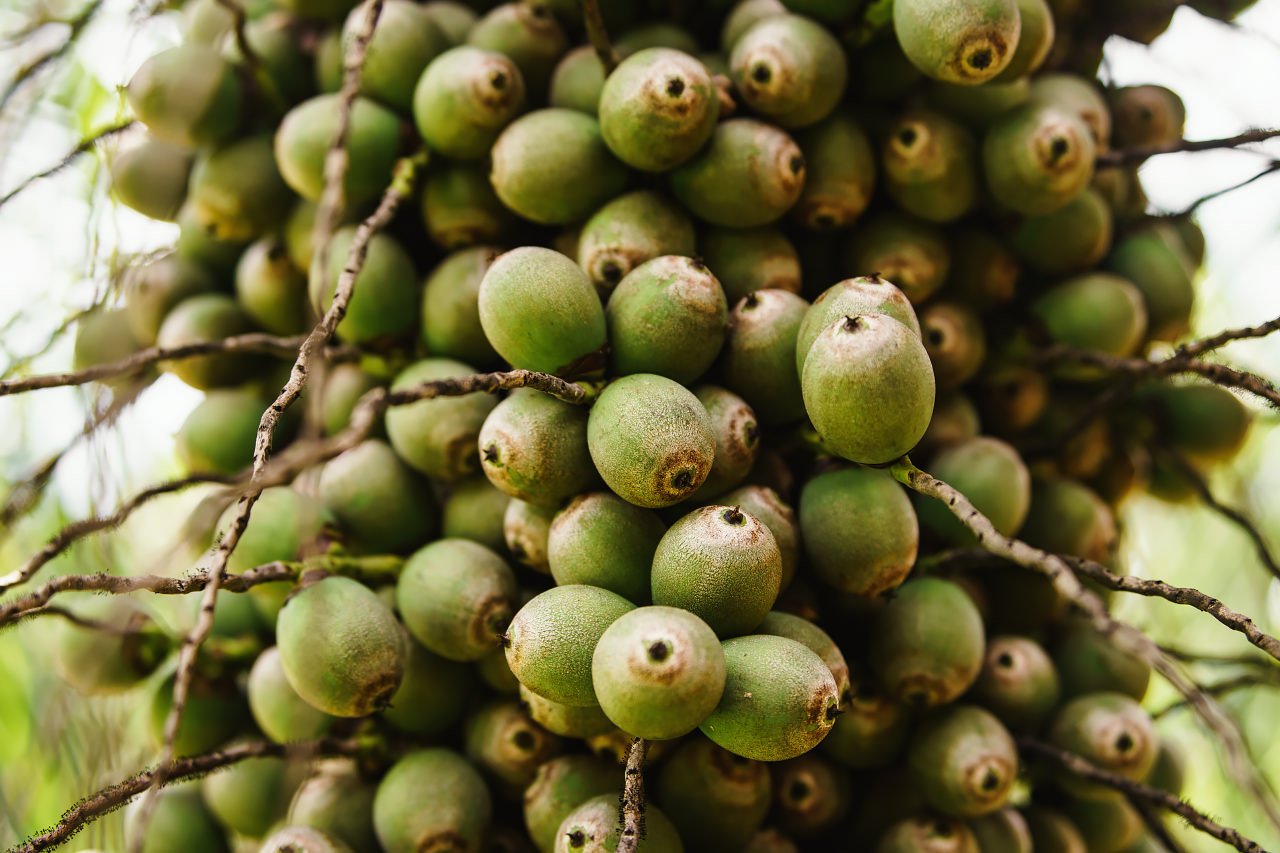 Just a bowl of bananas on the dinner table. Shot somewhere around 50mm @ f/5.6 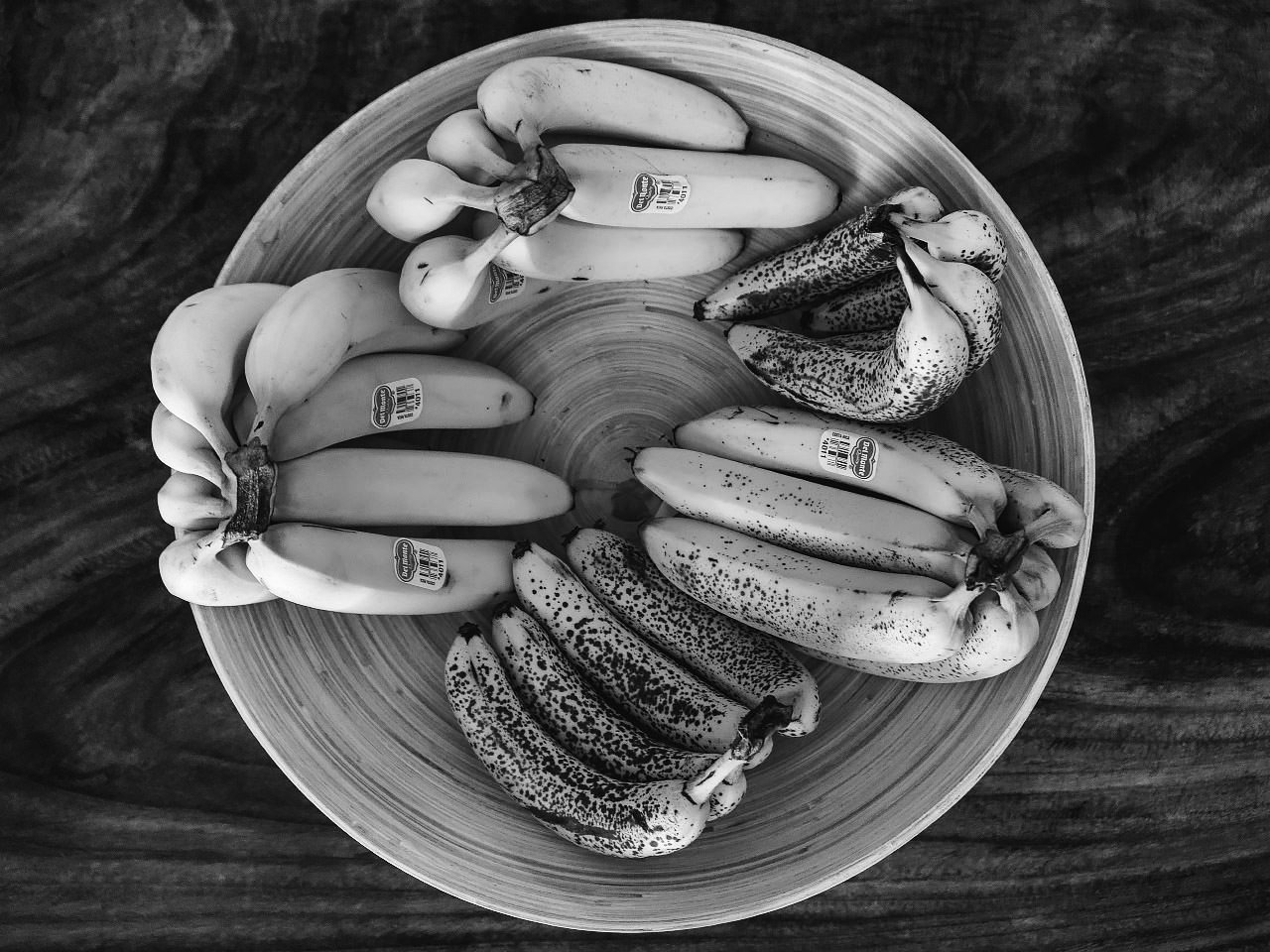 The Magnolia tree in the yard is sprouting new buds. Macro mode, 40mm @ f/2.8. In the shade and backlit, color and contrast are good and the out-of-focus background is pleasantly smooth and non-distracting. 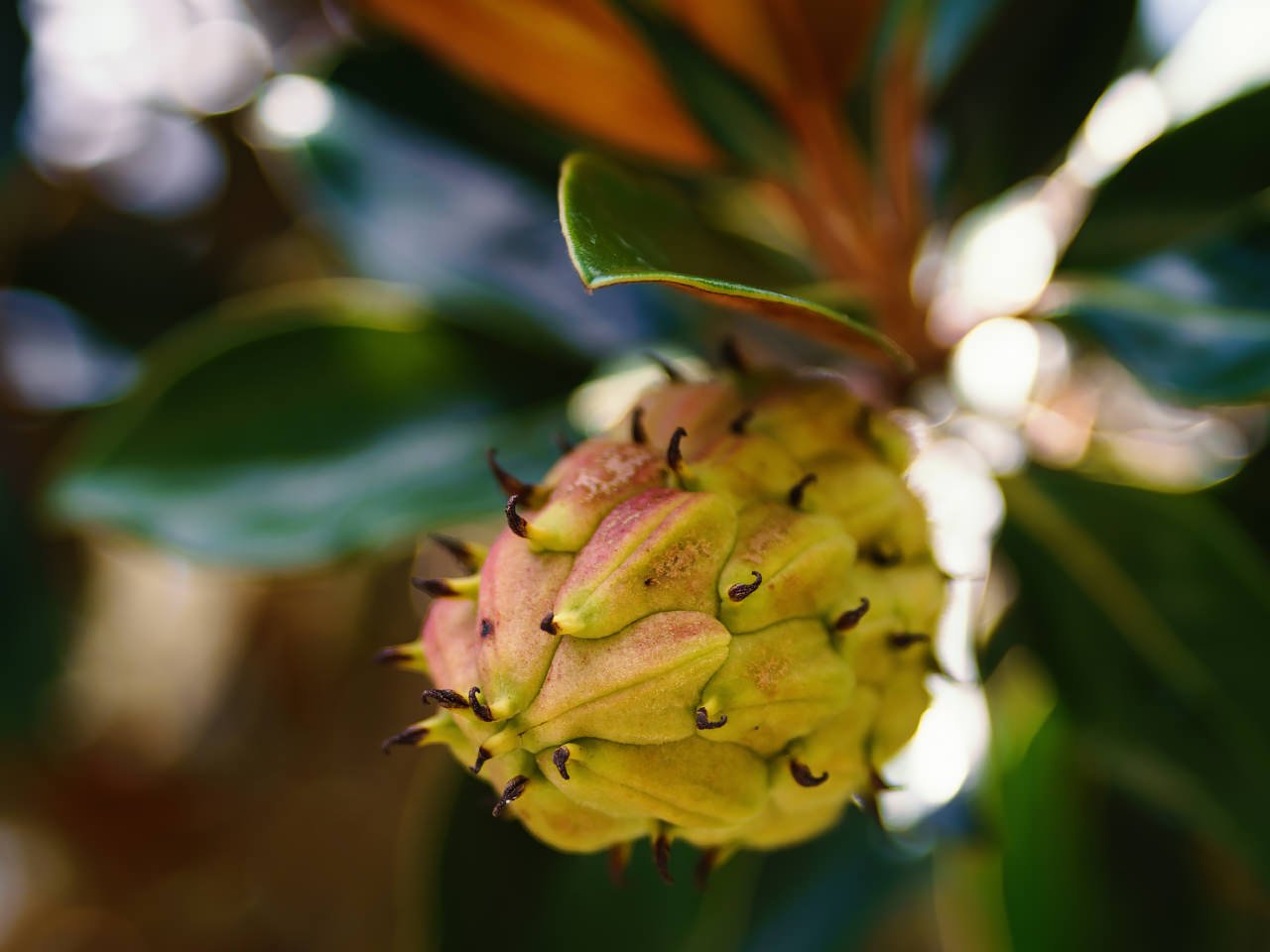 My second oldest daughter was kind enough to pause a moment for this final shot. 80mm @ f/2.8 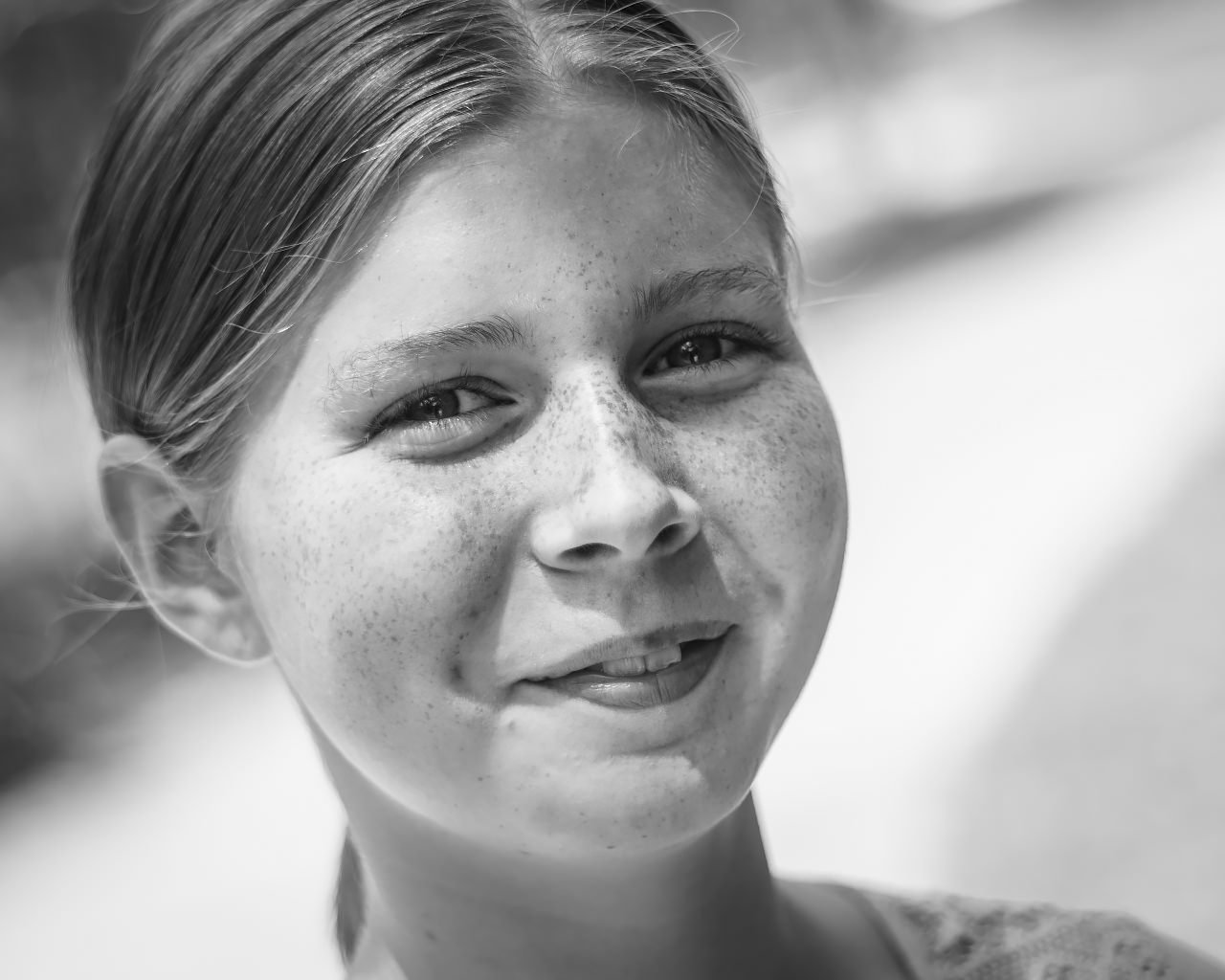 What can I say? The lens is awesome. All the effort put into designing this strange gearbox-driven lens seems to have resulted in an excellent mid-range zoom lens. When I first started shooting with it, I did find it a little fiddly using a lever and wheel to make adjusts but after awhile I grew fond of it; it’s actually really fun to handle.

You don’t hold this lens like you would a traditional zoom, with your hands wrapped around the barrel. I keep it propped with the gearbox resting on the up-turned palm of my left hand and use my thumb to move the focal length lever and index finger to turn the focus wheel. The travel distance of both is just right so that you aren’t moving your fingers outside their natural range or having to make repetitious movements.

I can highly recommend this lens to anyone wanting to own a piece of history and/or turn some heads on their next photo walkabout. Comparing this to my favorite zoom lens, the incredible Minolta MD 35-70mm f/3.5, I would say it at least equals it. They’re both around the same size and weight and have a similar range of focal lengths.

In fact, this Minolta 40-80mm f/2.8 lens is the antecedent to the 35-70mm f/3.5 (thus, for giggles, I used it to shoot the lens photos). Minolta likely found that the unusual design and complexity of making this gearbox lens was cost prohibitive and went back to the drawing board to come up with a balanced compromise.

They only made two versions of it before canning the whole idea. The lens I have is the 1st Gen ‘MC’ version. An ‘MD’ version was made in 1977 and after that, they called it quits. Both versions can still be found for sale online but I’ll warn you, this lens is priced for the committed collector.

For a good, fully-functioning copy of this lens, you can expect a price range of $600-$1,000. Some copies of this lens have suffered from a seized gearbox and it would be extremely challenging to find a shop that would be willing to open it up to attempt its repair. That being the case, a non-working model I would expect to see selling for $200-$300.