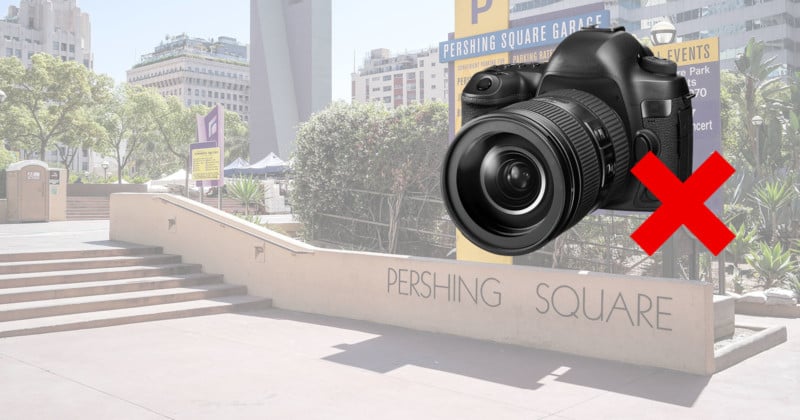 The city of Los Angeles is banning photography at free concerts in a public park, and photographers aren’t happy about it. Several prominent photographer, journalist, and civil rights organizations have joined forces in writing a letter that protests the policy.

Pershing Square is a one-block public park located in downtown Los Angeles, California. The Pershing Square Downtown Stage is a series of free summer concerts that are open to the public. This year it runs from July 8th through August 27th.

The fact that the concerts are free and open to everyone in a public park is why this year’s policy on cameras and photography is raising eyebrows and causing concern. Here’s what the section says on the series’ rules and policies web page:

At the request of the artist/performer, video, photo and audio devices are prohibited at Pershing Square’s Downtown Stage Saturday concerts. This includes Pro cameras, monopods, tripods, selfie sticks, iPads or professional photography/ video equipment of any type. This policy will be strictly enforced due to contractual agreement. 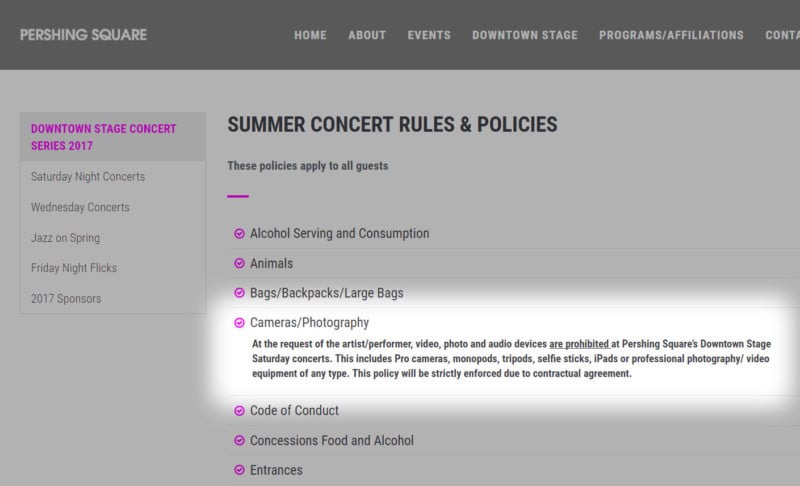 Although the policy includes “professional photography equipment of any type” — presumably targeting DSLR-style interchangeable-lens cameras — the broad ban on “photo devices” could potentially be interpreted to include anything from smartphones to point-and-shoot cameras.

“The NPPA sees these type of onerous restrictions far too often nationwide,” says NPPA general counsel Mickey Osterreicher. “It is still extremely difficult to understand how the City of Los Angeles and its attorneys could believe they had the authority to contractually agree to a request barring photography and recording along with audio-visual devices from a traditionally public forum such as Pershing Square during certain events.”

This policy has prompted a coalition of 13 organizations to protest the legality of the policy by writing and sending a letter to the City of Los Angeles Department of Recreation and Parks. These include the National Press Photographers Association (NPPA), Electronic Frontier Foundation (EFF), Professional Photographers of America (PPA), American Society of Media Photographers (ASMP), and American Civil Liberties Union (ACLU).

“The existing policies providing for a total ban on photography/videography […] at the Downtown Stage Summer Concert Series are facially unconstitutional,” writes ACLU of Southern California Chief Counsel Peter J. Eliasberg in the letter. “Accordingly, I request that these policies be modified to comport with the United States Constitution.

“Namely, there should be no restrictions on photography and videography in Pershing Square during the Summer Concert Series or at any other time.”

The letter goes on to show through legal precedents why the blanket ban on photography is a violation of First Amendment rights. Here’s a copy of the full letter provided to PetaPixel by the NPPA:

The letter was sent on August 3rd, and it gives Los Angeles 10 days to respond.

“If the City intends to stand by these restrictions, the ACLU will consider all appropriate action to address these constitutional violations,” Eliasberg concludes.

Los Angeles is the second California city in two months to spark controversy over its photo policies in public spaces. Back in June, Laguna Beach caused outrage over its mandatory $100+ photo permit for non-commercial photo shoots in public places. After complaints flooded into the city offices, the policy was changed to clearly cover only professional photo shoots.

Update on 8/8/17: This LA policy was brought to the attention of the organizations behind the letter by photojournalist Cliff Cheng, who shoots for the Los Angeles Collegian newspaper at Los Angeles City College. Here’s what he wrote in a press release:

[Cheng] attempted to get a press credential, and was denied, to cover free, no ticket, public concerts at Pershing Square, a public park in downtown LA. Upon further digging, Cheng discovered posted rules on the LA Recreation and Parks (RAP) website which ban photography, audio recording and distribution of leaflets. The reason given for the ban was that the bands contractually required this.

Cheng asked the American Civil Liberties Union – Southern Calif., if it was Constitutional for the government to give up the free speech rights of its citizens and the news media to a private corporation? ACLU replied it was not Constitutional and wrote the enclosed letter to LA City asking it to comply with the Constitution.

Image credits: Header illustration based on photo by Visitor7/Wikmedia Commons

A Shaded Path: A Large Format Portrait of Kyrgyzstan