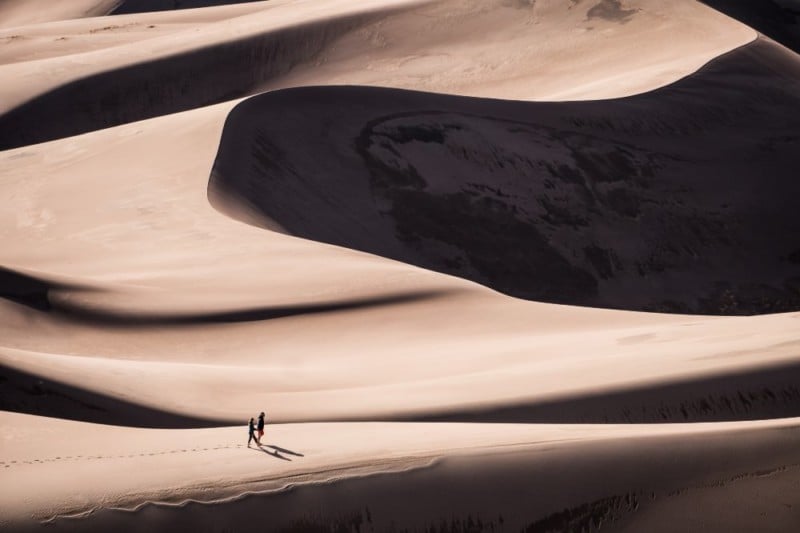 We didn’t start Unsplash to reinvent an industry. We started Unsplash because we thought it might be useful. Unsplash is a community where anyone can share high-resolution photos for anyone to use freely.

It began as a Tumblr blog with ten photos we had leftover from a photoshoot. Instead of letting our photos sit dead in a hard drive somewhere, we thought it would be better if they were put to use to move other creative projects forward. A freelance designer could grab an image to pitch a mockup or demo. An entrepreneur strapped for cash could put a website up with a nice background photo to attract potential customers.

We believed the good from giving our images away would far outweigh what we could earn if we required payment or credit.

The Power of Photography

This proved true. By setting our images free, Unsplash turned into something much more meaningful than the hundreds of dollars we likely would have made selling them. Those first 10 photos photos have been seen 58 million times. Unsplash has become a community of over 20 million creators. People from all over the world have generously contributed over 250,000 photos, moving hundreds of millions of creative acts forward.

Unsplash photos have not only helped designers and entrepreneurs create demos and websites but have been a source of inspiration for everyone from teachers to non-profits to independent creators.

Unsplash contributors share photography to make an impact so our aim has been to push the impact of their imagery like no other platform ever has. Today, a photo featured on Unsplash is seen more than a photo on any other platform. More than Instagram. More than the front page of the New York Times.

You don’t need to come with an audience or have an agent to be great on Unsplash. We bring an audience to you.

As an independent designer myself, I understand you can’t do everything for exposure because exposure doesn’t pay the bills. But to completely dismiss the value of exposure doesn’t make sense either.

All artists need an audience to survive. Why do we spend time posting on Instagram if we don’t get paid for it? Because those posts build an audience over time.
In the last ten years, several platforms like YouTube, iPhone, Twitter, Instagram, SoundCloud, and Medium have enabled more and more of us to express and connect. Sometimes, this expression and connection are done for fun. For nothing but the purpose of creating. Other times it’s done to create an audience for something else. Filmmakers distribute trailers for free on YouTube to sell a movie. Musicians release free songs or entire albums on SoundCloud to sell concert tickets. Authors give free chapters and pour thousands of unpaid hours into blogs to sell a book.

Online platforms have opened up an opportunity for so many people to share their craft with huge audiences instantly. New platforms create a distribution channel and community we otherwise wouldn’t have. In this sense, there’s never been a better time to be a creator.

When two-time #1 New York Times best-selling author Tim Ferriss was blocked from distributing his book in Barnes & Noble, he uploaded excerpts from his book for free on BitTorrent to get distribution. Writer Leo Babauta “Uncopyrighted” everything on his popular blog, Zen Habits, in service of spreading his work further than he ever could alone. Chance the Rapper became the first artist to win a Grammy without selling physical copies of his album and giving most of his music away for free.

These examples of creators sharing in extreme ways didn’t produce any immediate monetary gain. In fact, they probably lost some sales from it. But whatever the losses, they were more than made up for by the outsized benefits that came from openly sharing their work. As Chance the Rapper said,

I realized my strength was being able to offer my best work to people without any limit on it.

I make money from touring and selling merchandise, and I honestly believe if you put effort into something and you execute properly, you don’t necessarily have to go through the traditional ways.

Unsplash is Different Though…

I get how Unsplash could seem more devaluing to a commercial photographer than other photo-sharing platforms because you’re giving up your copyright ownership of your photo when you share it. To get behind this argument though, we need to understand what photo copyright ownership gets us. The purpose of holding on to copyright for a photo is typically so you can protect it from someone else taking that photo and selling it for profit.

Before the Internet, holding on to copyright for photos was more beneficial because the value in licensing a photo was high. The issue today is a licensed photo is losing its value. The price photo buyers are willing to pay to license a photo is accelerating downward. If you post your photos on a stock photo site, you’ll earn ~$511/year on average on your collection, half what you would make two years ago.

While almost everyone needs images to do their jobs today, the jobs we do with imagery are different from when photos used to be licensed by media buyers or photo agencies for commercial use. For example, almost 70 percent of the people who download images on Unsplash have never downloaded a photo from a stock photo site before. And the most common uses for Unsplash photos are presentations, blogs, or personal projects.

At the same time, the cost to produce a photo is going down. The five most valuable companies in the world today are all competing on the camera. While professional photography gear is still expensive, mobile cameras are improving at a rate that will eventually put a professional-level camera in everyone’s pocket. 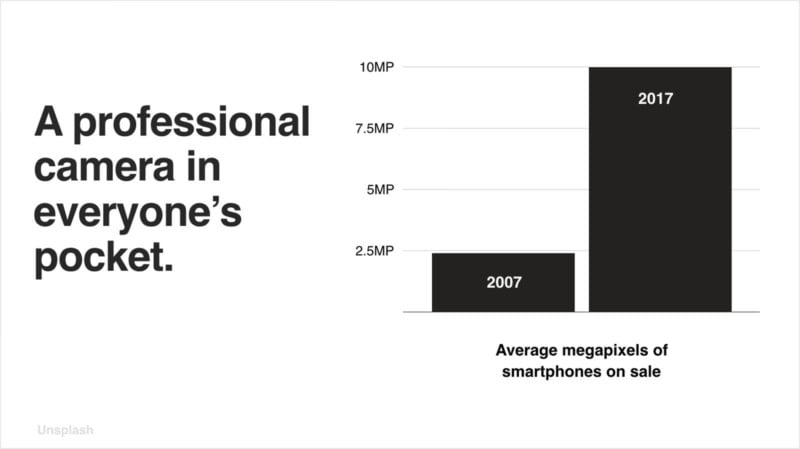 Every 2 minutes, people take more photos than ever existed 150 years ago. There’s no doubt creating a great photo requires artistry but photography has become more saturated which means many photographers today are not contacted by people wanting to pay to use their copyrighted photos.

The human brain is wired to connect with imagery so imagery will always be something people seek out. Since photos work so well as a form of connection, we saw Unsplash as a more impactful way to do that. Giving up your copyright to a photo seems extreme but it’s this extreme level of giving that produces the unprecedented level of connection.

Recently, a team of researchers found the most shared articles from the New York Times were ones that gave readers practical utility. Giving someone something useful tends to have the biggest impact on people. When you pair two powerful things like giving and photography, you reach a whole new level of impact.

Many of our members have said they’ve gained so much from sharing work on Unsplash compared to anywhere else. Many have booked client work after posting just a couple photos. Some have been flown around the world on photoshoots. Some have gotten enough work to leave their jobs and become full-time photographers. Some have been able to build audiences for new products. And every contributor we’ve spoken to has enjoyed the impact their photography has made toward moving creativity forward. Here are a few of their stories.

Yes, there will be people who use Unsplash photos freely who may have hired a photographer if Unsplash didn’t exist. But by giving photos, Unsplash contributors create a new opportunity for millions of other people to find their work.

If someone needs a photo for a presentation that will only be seen by a few co-workers, they don’t have a budget for photography. If they can’t use a free photo for that, they are not hiring someone. And there is no relationship created. But by finding a photo on Unsplash, a relationship begins. When they need to hire a photographer for a shoot, they’re more likely to go back to the place that fulfills that need. We’re trying to make it so these relationships connect back to the Unsplash contributor that inspired them.

We’ve already begun to build things into Unsplash to strengthen this relationship between photo contributors and the creators they inspire. We’re building up a library of things made with Unsplash to connect back to contributors. Just last month, we launched a “Say Thanks” feature which creates a way for people to publicly recognize the Unsplash contributor who gave the photo they downloaded. And we’ve begun work on an Unsplash member search to help our members book creative work.

In a sense, every Unsplash photo turns into a billboard for our contributors. And the future business model of Unsplash is about creating relationships through the unique attention and use each photo creates.

The Future Value in Photography

By our estimates, there are potentially 100 times more people looking for usable imagery today, than a decade ago. Image use has moved mainstream which is why there’s a new opportunity for a business model that works better for everyone.

There’s no doubt about the impact of photography. Photos are powerful. The question is not if photography will maintain its power but how to create meaningful value from it. We’ve already begun to think about what this looks like. It’s going to take time to figure out. While we don’t have all the answers today, we will always be transparent and upfront about where we’re headed.

Every industry evolves. Things will change. We can’t be resistant to change no matter how much today’s world benefits us. We face the same fact that every artist and business must face: what we offer today will eventually be obsolete. We can choose to be upset with this fact or understand it is inevitable and continue to adapt.

About the author: Mikael Cho is the founder and CEO of Unsplash. The opinions expressed in this article are solely those of the author. You can connect with him on Twitter and Facebook. This article was also published here.

Camera Captures Animals Eating, From the Food’s Point of View

Why You Shouldn’t Be a Photographer