Third base is sometimes referred to as the “Hot Corner” because balls get sizzled that way at speeds up to 125mph. Snow says that the idea was to replicate an image taken in a game, with one minor difference: the baseball would be on fire. 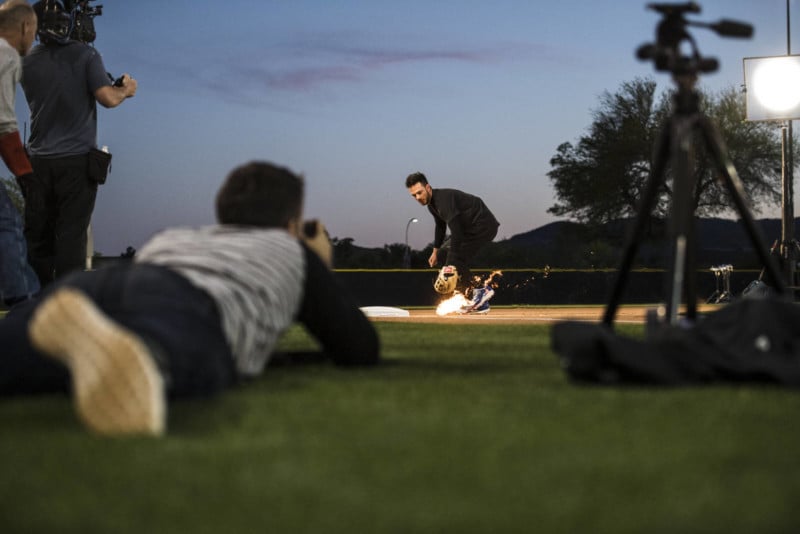 Snow spent months planning the shot, which he says was the biggest in terms of production value that he’s ever worked on.

“The biggest challenge was that we wanted to also do a behind the scenes video, to prove to fans that the fire wasn’t just dropped in via Photoshop,” he says. “We wanted to prove to everyone that this was a real sporting moment, using a real ball on fire. This meant that the lighting had to work for both stills and video, and of course the amount of bodies on set increased exponentially.”

“In addition, we only had two hours with Kris, and as the ambient light was only going to be right for about 15-20 minutes (for the Hot Corner portion of the shoot), we were really up against the clock the whole shoot. So, we had to make it happen as efficiently as possible, and not waste any time while Kris was on set.” 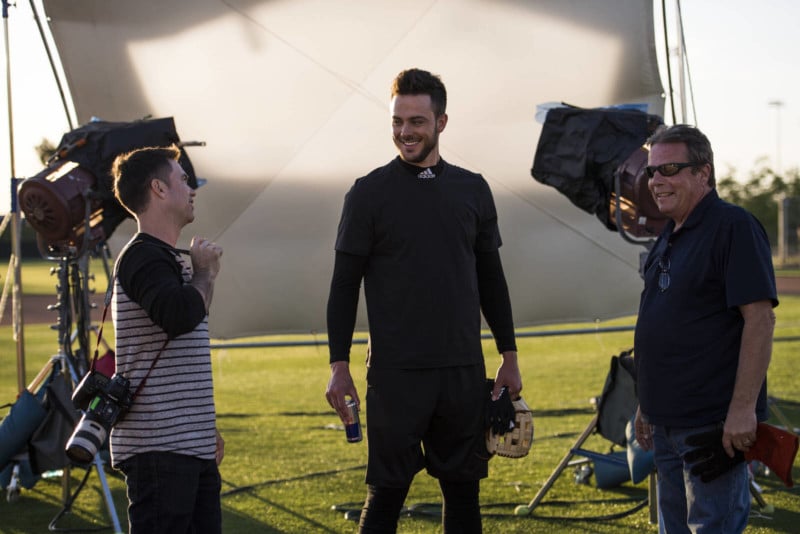 It’s not every day you get to shoot a million-dollar athlete having fireballs lobbed at them, and Snow says it was rather nerve-wracking. Not everything went entirely to plan. 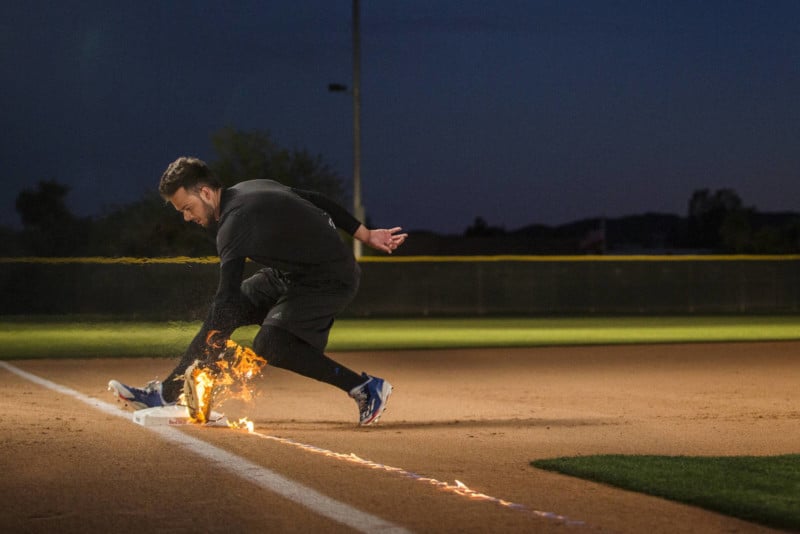 “We shot this in a fairly small town and essentially rented all of the available lighting in the town,” Snow continues. “During the pre-light day, I discovered that I was a full five stops underexposed from the settings I had requested from the lighting technician. We had to make use of last minute additions to our lighting package, and some creative settings in camera, to make it work.” “I think it’s a combination of the enormity of the project, the expectation level to deliver, working with pyro and mitigating risk for Kris, and also the fact that there was a crew shooting an extensive behind-the-scenes video. The video crew was there on the light-test day and I felt out of my element being in front of the camera, and it didn’t help my nerves when things weren’t going as planned on the pre-light.”

The hard work paid off. Here are some more of the final images from the shoot: 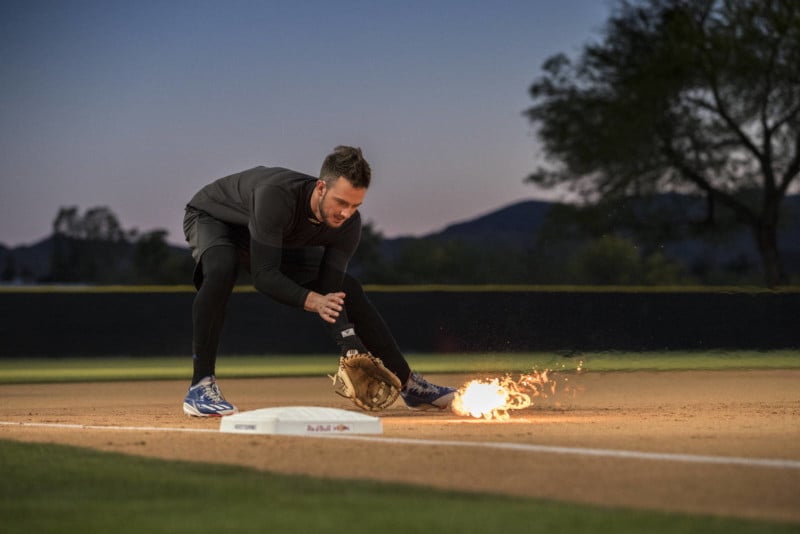 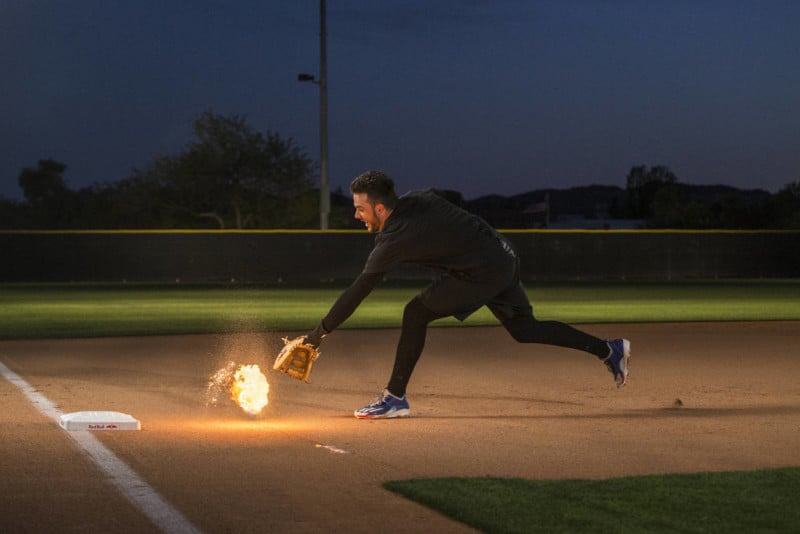 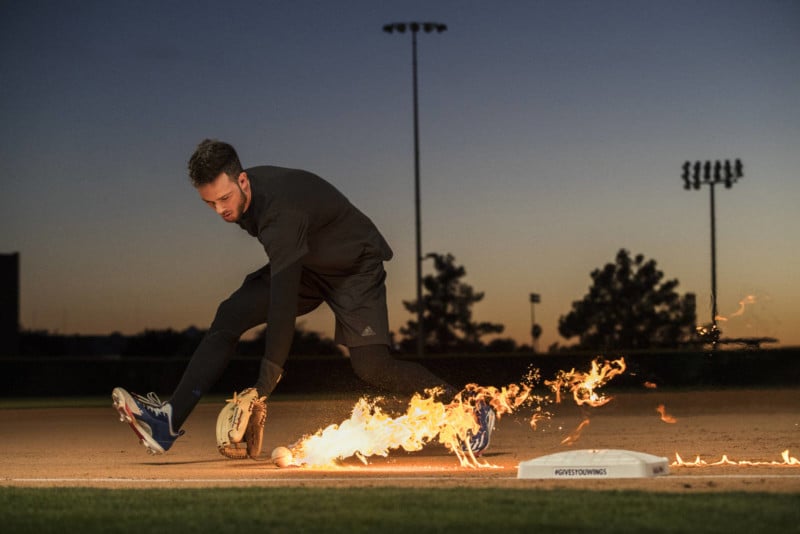 Red Bull tells us that Cubs fans need not worry — Bryant wore flameproof Adidas Nomex underpants and a long sleeve shirt that actively pushed heat and sweat away from the body. But his Rawlings glove was toasted pretty good!