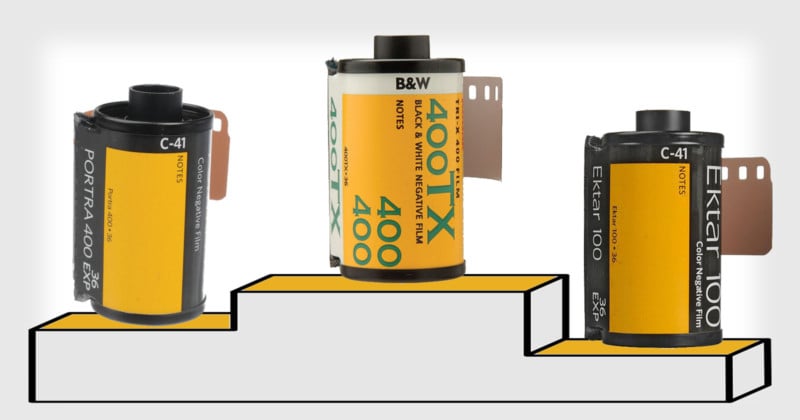 When a new film photographer asks the photography community which films are the best, most voices tend to agree on Porta, Tri-X, and HP5… but are these the most popular? In this article, we are going to look at the top 10 films photographers prefer.

Earlier this year, I launched a Film Dating tool for helping photographers find their favorite 35mm film stock. It’s been a few months since I launched it and its popularity went way beyond my expectations — over 38,000 people have used it so far!

This unexpected popularity also gave me the opportunity to gather enough information about the films people prefer. That doesn’t necessarily mean that these films are the most sold, but it gives us a basic understanding of which looks please people the most.

So without further ado, let’s have a look at the 10 films that appear the most in the results, starting from the least favorite to the most:

From this list we can notice a few interesting points:

The Most Preferred Film Stock is B&W

I think that isn’t a surprise at all. The first roll of film I personally shot was a roll of HP5, and I’m sure many photographers step into film with black-and-white. There’s an aesthetic that’s more appealing than digitally converted RAW files, and it’s also the “easiest” (or most accessible) film to develop at home.

One thing I wasn’t expecting was to see Ilford HP5 so far away from its historical competitor. Clearly, Kodak still has the lead when it comes to monochrome films.

This tells us people don’t like the look of film in low light very much. Shooting film at night can be tricky and the choice of fast film is rather limited. We have, of course, CineStill 800, which does a great job in low light and especially when pushed 1 or 2 stops.

I was just surprised to see that we have its little brother, the CineStill 50, instead of the 800 in the top 10. It’s true that the look of this film is absolutely stunning, but the 800 version seems to be so popular that I would have expected to see it instead.

Fujifilm is On the Way Out

While Fujifilm is making huge progress on the digital side of photography and imposing its Instax line as the standard for instant films, they’ve been letting analog photography fall to the side of the road. Their catalog is getting smaller and smaller, and I don’t see them jumping back on the train anytime soon.

Fuji Pro 400H is probably the only Fuji film that I could shoot with, but I’m not a big fan of its colors. Clearly, the Kodak brand is doing a better job here.

Lomography is in the Game

Lomography has played a major role in the resurgence of film, so it’s no surprise to see two of their films in the top 10. Over the past several years, they’ve been bringing new fun cameras and cool-looking film to the market. You may or may not like their products, but we all do have to say a big “thank you” for what they’ve done to keep film alive.

With 3 films in the 3 first places, Kodak clearly leads the market and I’m guessing that’s not a surprise to anyone. The market has been driven by this company since longer than most of us can recall. Even if other manufacturers have been trying to compete against them, they still seem to be one step ahead.

In total, Kodak tallied an impressive 40% of the results! Well done, Kodak.

Note: Again, this top 10 list is not an accurate representation of the market sales. It’s what people tend to prefer the most in terms of looks and aesthetics, but we can probably assume that it gives a good idea of which films are the best sellers. Also, slide films were left out of my tool and this top 10 list because they are becoming more and more difficult to find and even more difficult to process.

Godox Made an Off-Camera Flash and Transmitter for Smartphones

Ep. 196: How I Nearly Got Robbed While Shooting Monday – and more