In this great video from DSLR Guide, Simon Cade talks about discontentment: how it can be harnessed as a fuel to keep driving forward, and as a signpost to assure that you’re on the right track.

All creatives know the feeling of that spark when ideas just flow, and the thrill that comes with just nailing a concept. But much more common is that feeling of frustration and discontent with your work. According to Cade, that discontent is not at all a negative thing, and in fact should be seen as a sign that you are on to something.

The discontent is a side effect of what Cade introduces as modified perfectionism: the refusal to accept (almost) anything short of (near) perfection. Before and after every good idea, someone has to say that it’s still not good enough. That’s how true masterpieces are created: forged from the fire, rather than dropped from the heavens.

As an artist, you have the option to take the path of least resistance. You can engage in jobs that you are overqualified for, and only take on challenges that you know you’ll succeed in. This path brings comfort, but the path is flat. In protecting yourself against the low points, you also sacrifice the thrill of the highs. And as Cade argues, contentment is the enemy of progress. 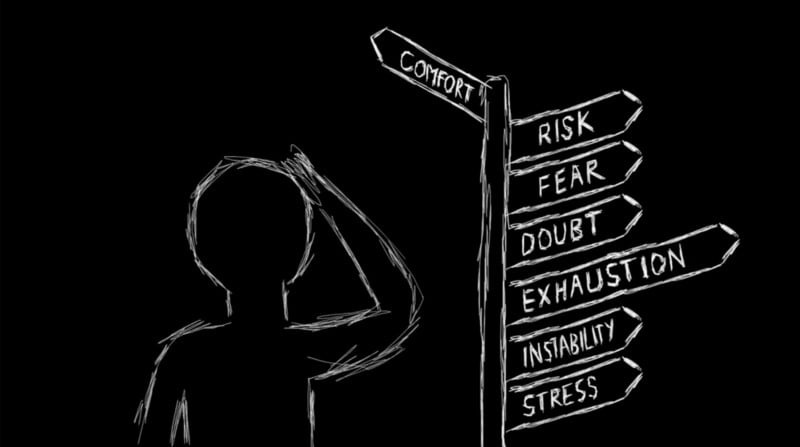 This isn’t to say that you should find flaws in everything in your life – there are some things that are not worth the energy. Cade uses the example of his foray in to rock climbing – he was discontent with his abilities and instead of powering through it, he just gave up. That’s a normal response, and that’s fine, because rock climbing isn’t Cade’s life work.

The main thing to take away from all of this is that no matter how skilled you are in your field, you should expect to struggle with self doubt at times, and understand that it is part of the process of growth. As Cade most eloquently puts it: