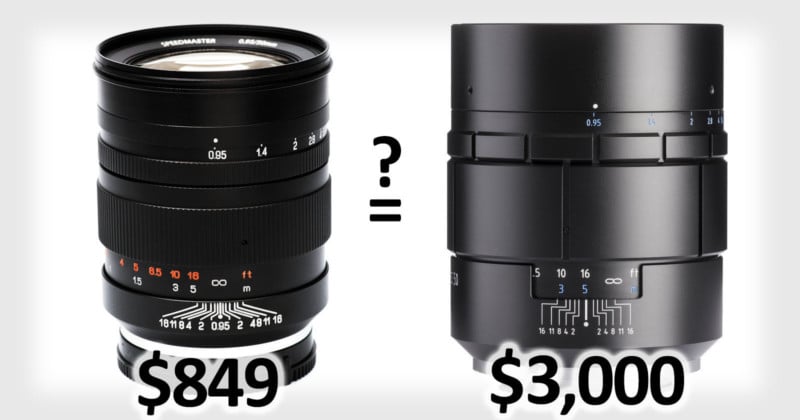 Two years ago there were rumors floating around that the Meyer-Optik-Görlitz Nocturnus 50mm f/0.95 was just a very expensive rebadge of the Mitakon Zhongyi Speedmaster 50mm f/0.95 that was supposedly assembled in Germany and therefore priced higher around $2,000+.

The reason I find this interesting now, is that Steve Huff recently mentioned in a recent YouTube video that he talked to the Meyer Optik guys and they said “not true, this is not the same lens,” according to Steve.

Luckily we live in an age where the Internet is archived. I believe that I have found the necessary evidence, which tells a different story than what the company says. 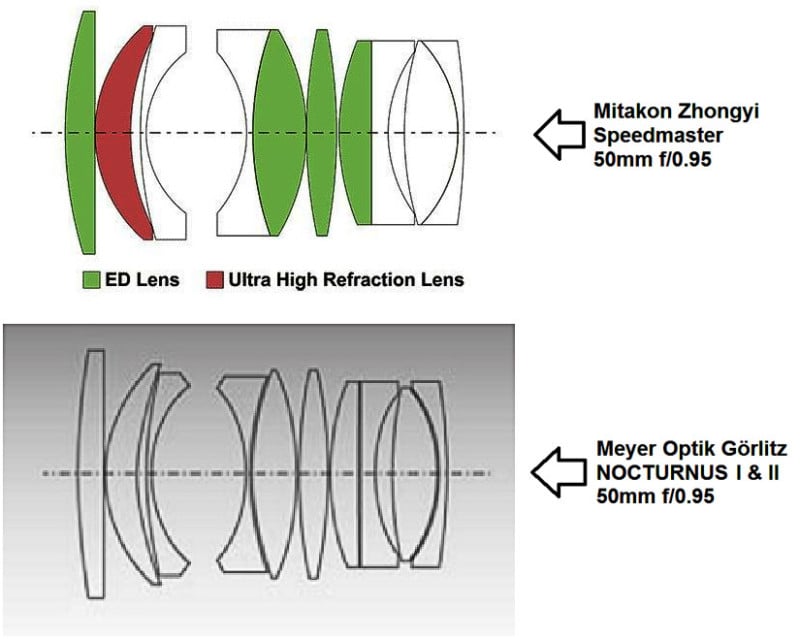 As you can see in the table below, Mitakon’s specs and body are identical to the original Nocturnus (mark 1), released in May 2015. More importantly, we can see that the Nocturnus’ I optical formula is indeed heavily based on the Mitakon formula. You can see for yourselves that there are minor tweaks to the elements. I suspect it was done in order to claim that it’s not the same exact lens, but the overall shapes are really nearly identical, they are practically the same visually.

In October 2015, the optical formula vanished from their website. On February 2016, a new body redesign appeared, the formula reappeared and the specs changed from f/16 to f/22 and from 720g to 670g. Sometime in 2017 they changed the naming to Nocturnus II and the price to $3,000. They increased the blades from 9 to 15 “anti-reflex coated” and the weight was also increased from 670g to 680g.

I should mention that you also get a 5-year warranty. 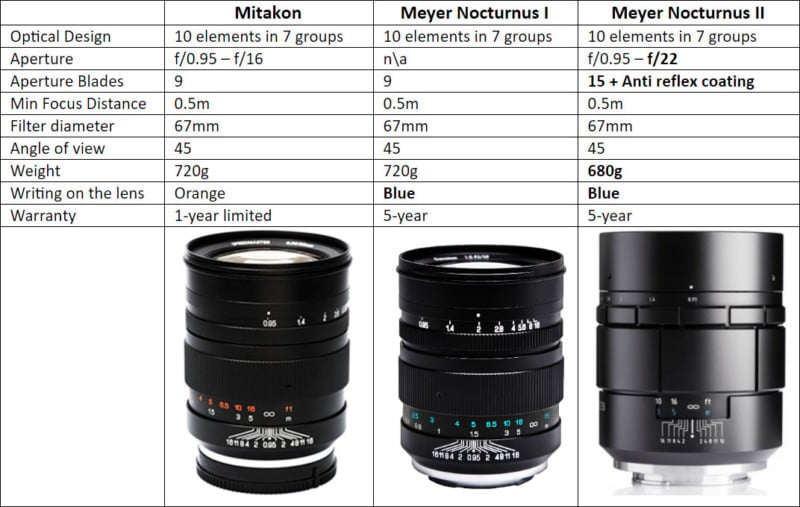 We already know that it’s a common practice for companies to make an expired-patent lens with minor changes or buy a lens design and tweak it — an example may be the Zeiss Batis 85mm f/1.8, which is supposedly based on a Tamron design — but why not own it from the beginning and say something positive about it being a (better?) derivative of another design? I suspect they want to distinguish themselves from a Chinese brand because they are “Made in Germany”.

Similarly, but without access to the optical formulas, we see that the first version of the Nocturnus 35mm f/0.95 matches the specs of the Mitakon Speedmaster 35mm f/0.95 version 1. Both lenses have 10 elements in 7 groups, a 58mm filter diameter and a minimum focus distance of 0.3m. The Nocturnus’ 35mm f/0.95 initially had an identical barrel design that changed recently and a minimum aperture is f/22 instead of f/16. 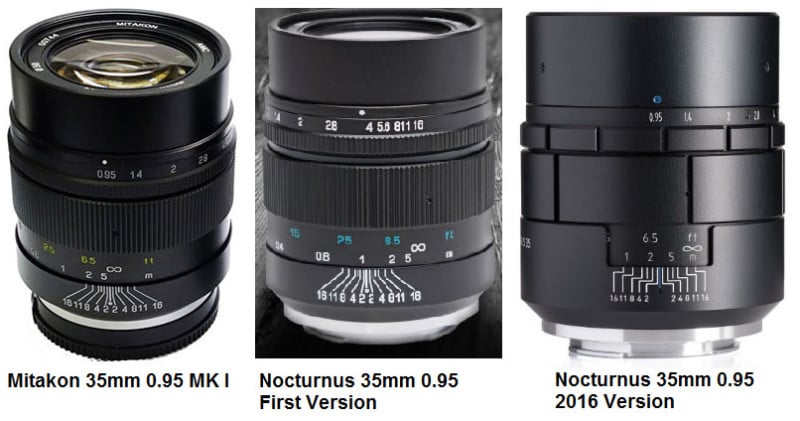 So what does that tell us?

It seems that it’s undeniable that the Nocturnus 50mm f/0.95 I and II were based on the Mitakon 50mm f/0.95, having gone through several redesign stages. Internally (in my opinion), the changes are for the purpose of claiming it’s a different lens (although I suspect it behaves very close to the Mitakon. Note that more aperture blades will result in a slightly different bokeh look). Externally, the changes are for the purpose of distancing themselves from the Mitakon style and for ergonomics.

The price has also increased from $2,000 to $3,000, and the lens is probably assembled in Germany going through rigorous quality control stages and emerging with a 5-year warranty. However, it costs 3.5 times more than the $850 Mitakon!

Are these extra features worth the higher price to you? I contacted both companies for comment regarding this matter but have yet to hear back. If they will reply, we will update this post. All the images we’ve shared originally appeared on the manufacturer’s websites.

Street Photography in Sri Lanka with the Fujifilm X-Pro2