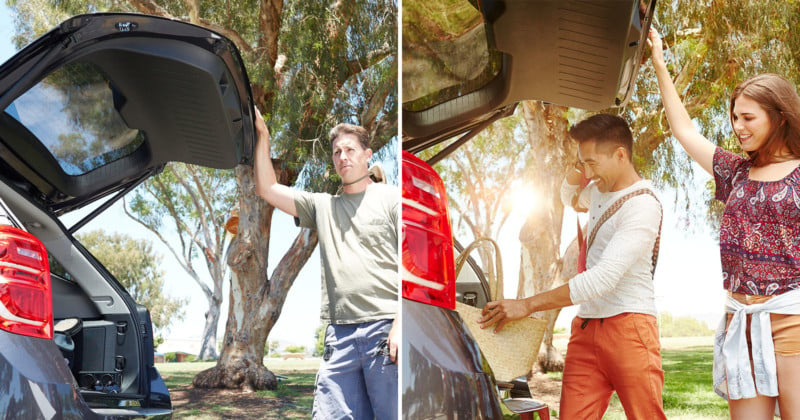 Buying a car is a stressful, time-consuming task for the average American. So when I was asked to create imagery that shows the fun, functionality and ease of purchasing a car in the digital age by Edmunds, it was a tall order to say the least.

We covered a lot of locations, lighting conditions, and demographics and may have encountered a few roadblocks (literally) along the way but we got to our destination safe and sound with smiles on our faces.

I wanted to share some of the before and after of some of the images we created and the stories behind them. 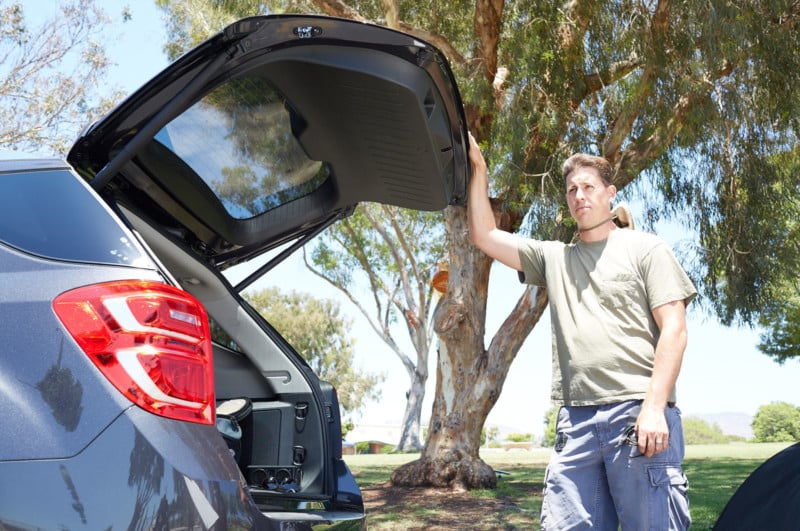 Our creative director really liked the vibe of unpacking the car for a picnic at sunset. Problem was, due to the schedule, we needed to be at another location at sunset. While many people would have shot it and dropped a new background in, I solved the problem by hoisting a Profoto with a P50 reflector on a medium roller behind the tree, put on a CTO gel, and then filled in the subjects with a bounce board and large softbox. We overcame the perils of shooting at high noon and came away with one of my favorite images of the shoot. 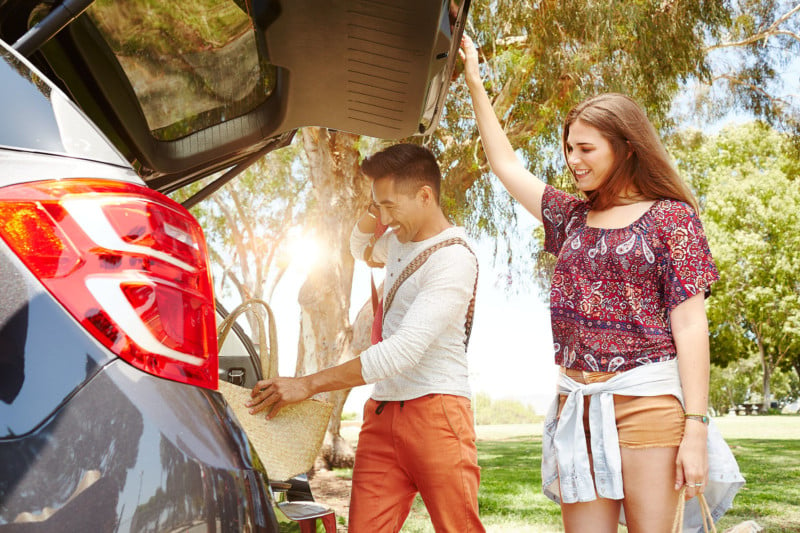 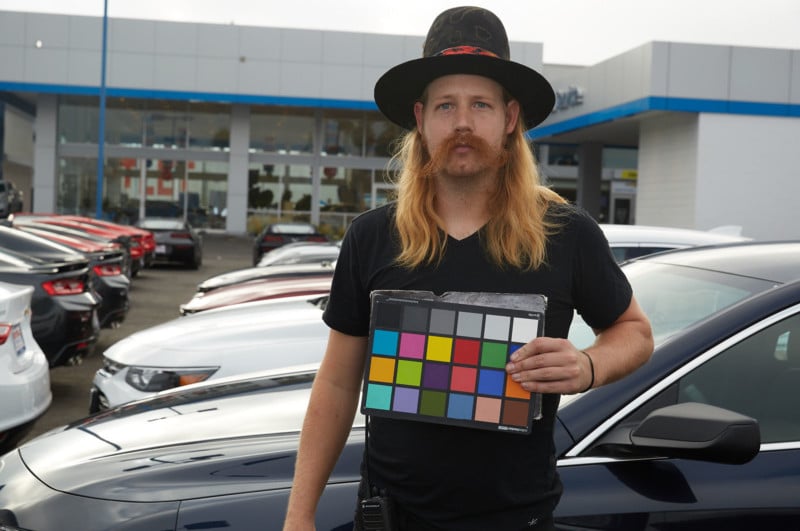 June gloom is a reality in San Diego but few extra lights can help recreate the sun. A large soft box over camera and two Profoto heads with P50 reflectors high on opposite ends of the subject outside the frame and flagged created a soft rim light on the hair and separate our model from the background. 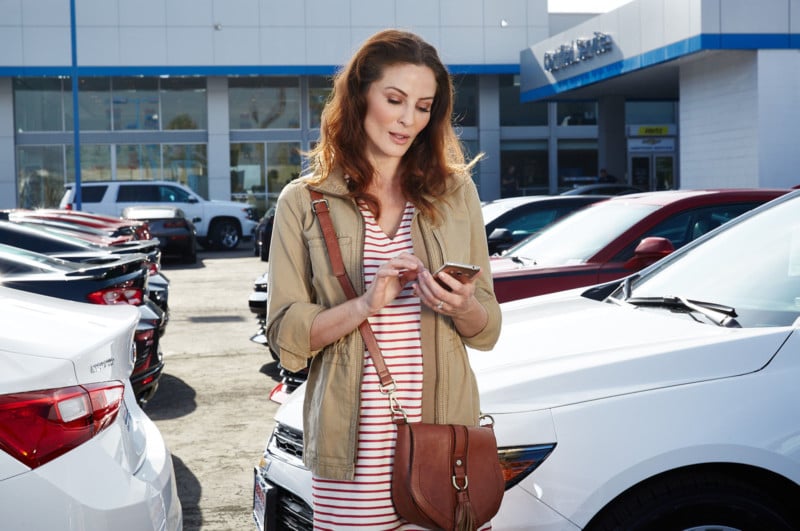 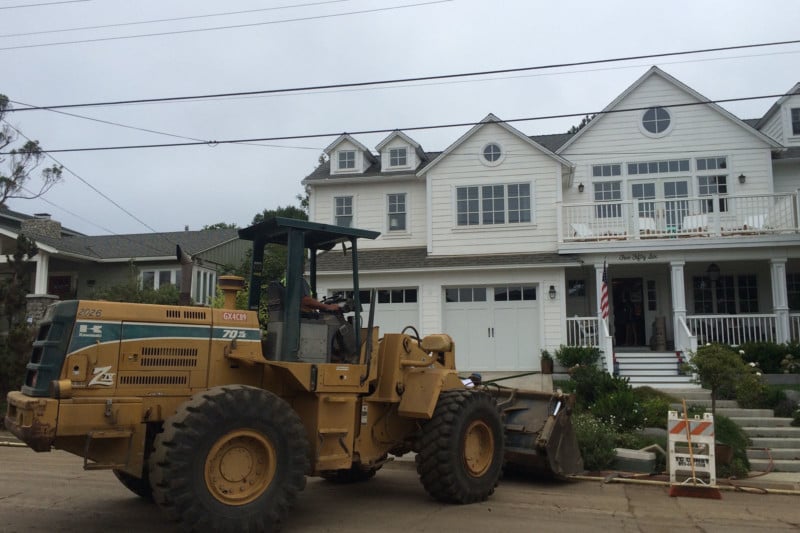 Our charming setting for the “perfect home” was interrupted by city construction the day of the shoot. What could potentially been a disaster was averted by talking the city crew into finishing their work in front of our house first on the street. In post-production I removed the water valve box, PVC piping and some extra electrical wiring from the background that was immobile from construction.

This shot actually wasn’t planned. We’d been shooting the family inside the car and as they were going in side to take a break the mom got her son out of the car and this moment happened. It was nice and natural so I brought in a Phototek umbrella give them a little more illumination and had them go through the motions a few times till we had a “perfect” moment. 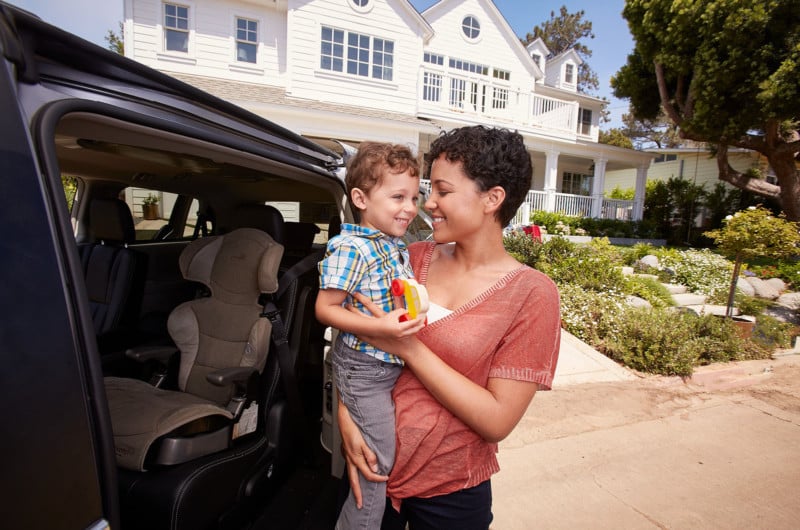 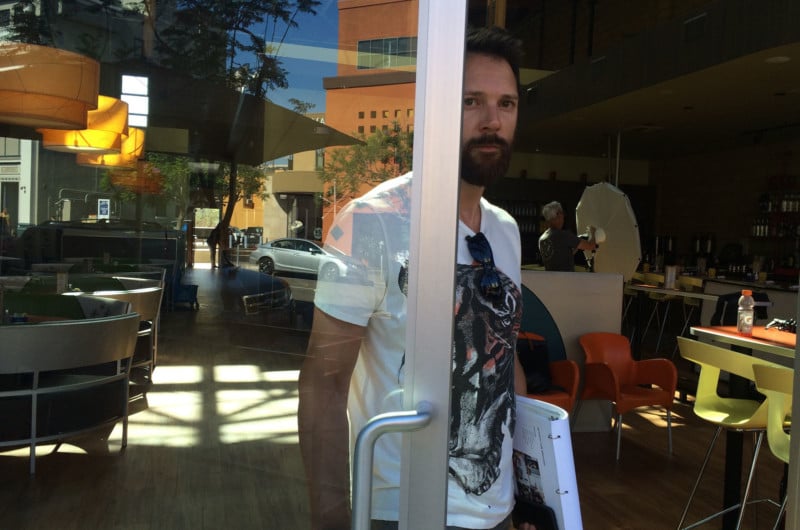 Our initial location was actually up the street, but a few days before our shoot they decided to remodel. Luckily we had a back up location just down the street to keep timing efficient. One of the necessary items in the photo was having a car in the reflection of the windows but our arrival had been delayed. Unfortunately the moment for the sun shining on the parked cars and reflecting in the doors had passed.

…or had it? To create the reflection we aimed a Profoto head with a zoom reflector along the body of the car and opening the restaurant door at a precise angle we could catch the car while we used to large umbrellas, one inside to bring up the ambient light and another outside as a key on the model in the frame to create some separation from the background. 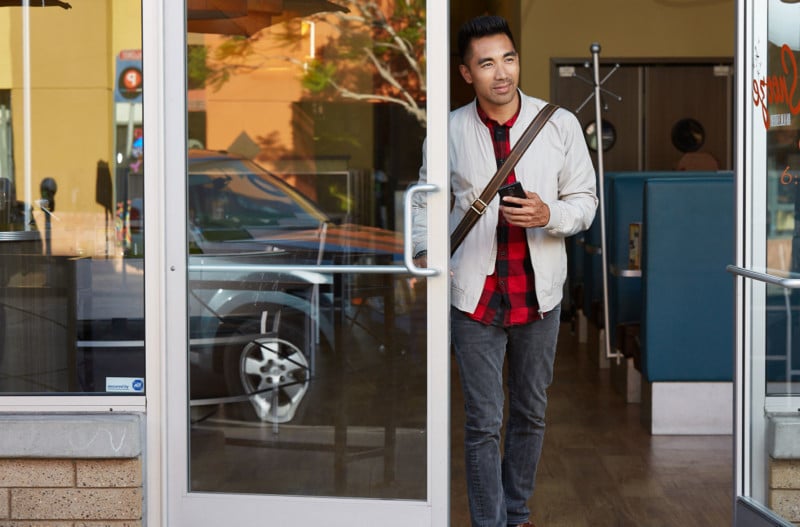 While I’d like to take credit for this, it really goes to my producer for casting real, fun, families that I really didn’t have to direct much. I pretty much told them to pretend they are going on a road trip. Did a simple three light set up. A beauty dish on dad, a bounce board on the daughter, and a zoom reflector back streaking across the car illuminate it. They were genuinely an outgoing, active family and when we wrapped early they went surfing after the shoot. 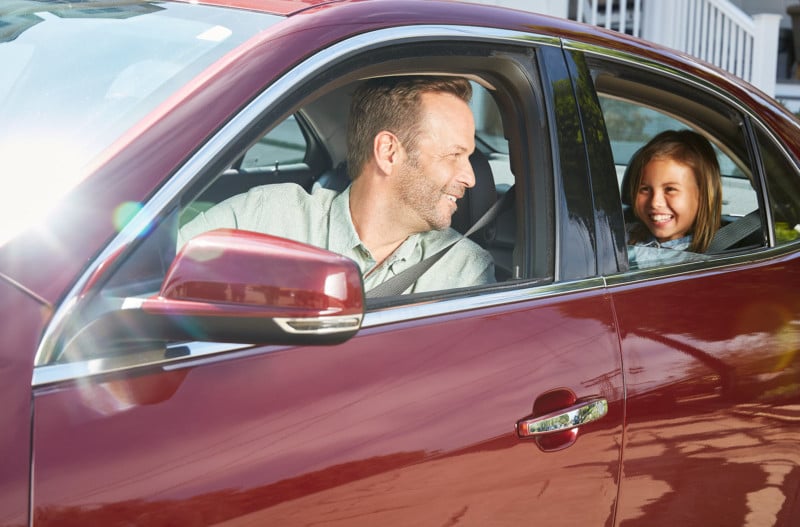 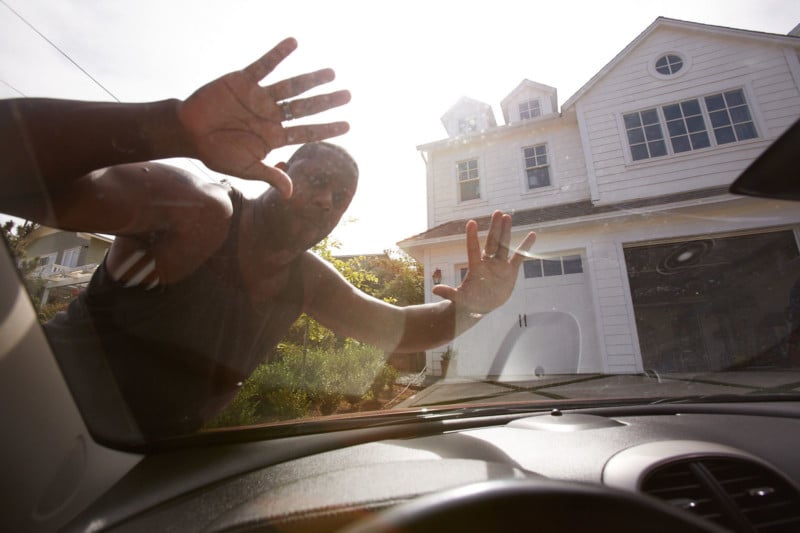 Trying to shoot and light three moving subjects through a car windshield presents a unique set of challenges. Windshield distortion, lens distortion, reflections, focus issues etc, add soapy water and you have a conundrum. But I brought in a couple of large soft boxes to even out the light and overpower the sun exposure so we have a faster shutter speed to stop motion blur.

Then we cued the fire hoses. I had an assistant with squeegee wipe water away from the windshield every few frames so I could recompose and make sure all the subjects were in the frame.

Yes, I may have gotten a little wet. Yes, it was fun turning kids loose with hoses! 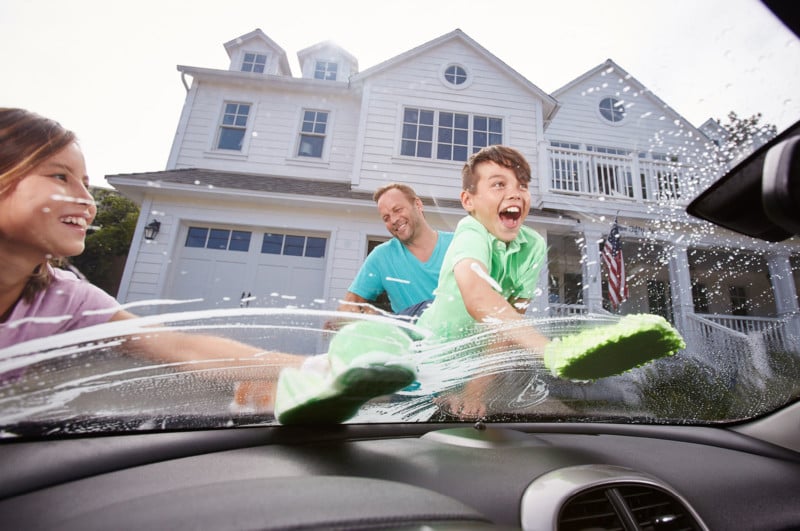 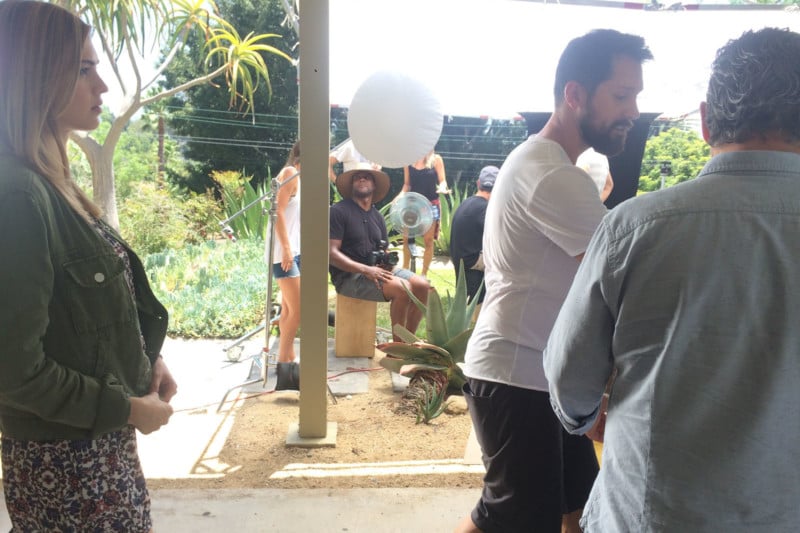 Sometimes the trick is to make a high produced photo not look over produced. To remove harsh shadow from the subject with the morning sun we raised a 12 x 12 to cut the light. Inside the garage, a Profoto head is pointing towards the ceiling with a reflector to increase the background ambient light. A beauty dish with a sock is the key for the father/daughter combo and then it’s just a process of going through the motions to of packing the car to get the right combination of expressions replicating sending your kid off to college. 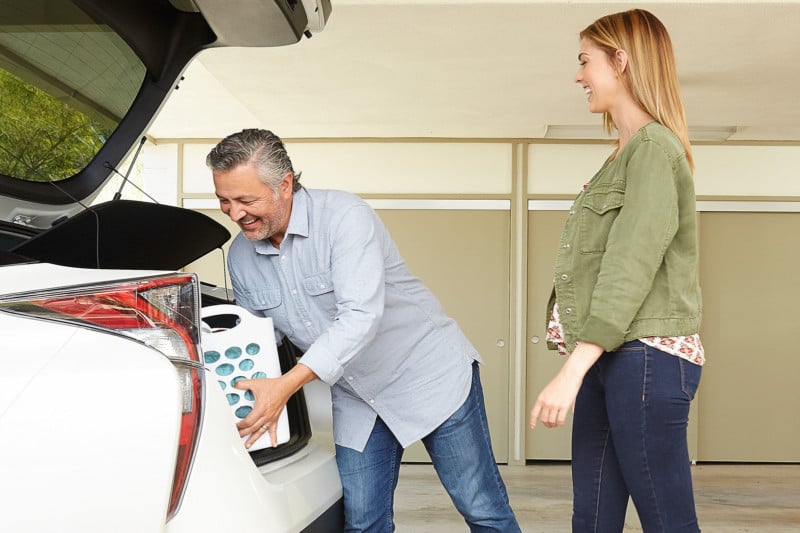 I hope you enjoyed this behind-the-scenes look, and a big thanks to an amazing crew for an amazing shoot.

About the author: Stan Evans is a photographer based in Los Angeles, California. You can find more of his work on his website, Tumblr, Instagram, and Twitter.

Pixlplay Transforms Your Phone Into a Fun Camera for Kids