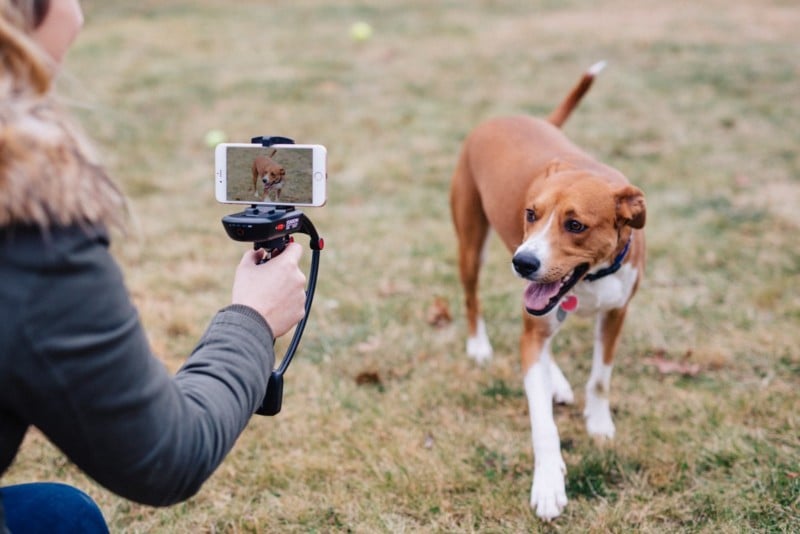 In 1976, the invention of the Steadicam revolutionized filmmaking. Today, the original stabilizer of choice is being downsized a bit to create the Steadicam Volt: Steadicam’s first handheld electronic smartphone stabilizer.

This move seems a bit out of step with the industry giant’s professional-grade history, but the Volt is Steadicam’s attempt to bring their gimbal technology to the masses. Now that almost everybody has a capable camera in their pocket—which probably shoots 4K and slow motion, too—it’s time to move beyond shaky footage.

Here’s a quick introduction the company put together for it’s Volt Kickstarter campaign:

The Volt is a two-trick pony: a combination between a fully electronic stabilizer like the DJI Osmo and a more traditional gimbal that uses a counterweight. This, claims Steadicam inventor and legend Garrett Brown, gives the Volt “the inertia and feel of a 40 pound rig.”

We’ll leave confirming that up to reviewers, but this dual-build comes with the decided advantage that it can still work in a limited capacity even when the Volt is out of juice. Once your DJI Osmo dies… no dice.

Plus, the mechanical component allows the Volt to respond more readily to your commands, as this comparison GIF demonstrates:

To create the Volt, Tiffen (the company behind the Steadicam) has teamed up with drone maker Yuneec and taken to Kickstarter for funding. In just a few days, the Volt is already way over-funded and looks on track to make its June 2017 ship date no problem.

To learn more or if you want to plunk down $140 and secure your own Steadicam Volt, head over to Kickstater by clicking here.

How to Use Composition Templates to Improve Your Photography

On Muses: Relationships Could Be Your Most Important Photographic Work