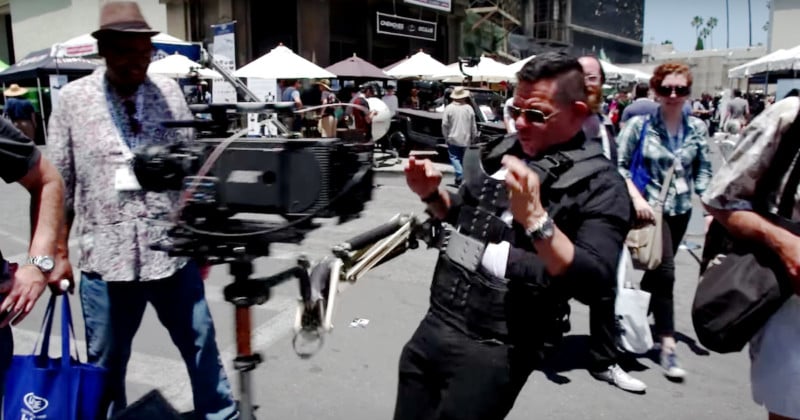 If this video doesn’t make you cringe, nothing will. In the middle of what looks to be a presentation at Cine Gear Expo, disaster struck. While testing out a powerful and pricey stabilizing rig, a $70K camera smashed to the ground.

It’s not entirely clear from the video, but it looks to be a presentation (although it could have been someone trying the gear out) and the camera attached to the stabilizer looks to us like an ARRI Alexa XT. This camera starts in the $70K range but can easily run up to $100K depending on how you decide to customize it.

Well, hopefully these guys didn’t customize theirs too much because we’re not entirely sure the camera survived this fall:

Here’s another look at the moment of truth, when the operator let the arm go out from his body while leaning back at the same time. The weight of the camera and counterweight was too much for the rig to handle, and it snapped.

It’s not clear whether the drop was due to equipment failure or user error, although both have been suggested by various commenters online who are familiar with this type of gear.

And now, a moment of silence for the fallen gear.

Update: The steadicam cinematographer in this video has contacted us. While he wishes to remain anonymous, here’s his explanation for what occurred:

Please check the GPI PRO which is the top of the line Steadicam arm failing exactly the same way.

I don’t want to blame this on Nib the poor Israeli guy who designed that arm that works with rubber bands. His product is actually revolutionary and it actually solves the issues that most of us Steadicam operators have with our complex and labor intensive Steadicam arms which are also very expensive to maintain and require lots of down time while we shipped our arms to GPI Pro in Oregon to be maintained or fixed.

Here are some of pictures that the PRO has failed on set while in regular (normal) operating conditions. Normal I mean running or maybe running upstairs or uphill which changes the angle and distance of the operator with the relation to the arm and in stairs with a back mounted vest (manufactured by Walter Klassen) which forces the arm to be extended to the limits that I was trying to test it. When I did this I wasn’t trying to make the arm or any part of it fail, what I was checking was how the behavior of the Staples or kinkos Rubber bands that are what creates the Iso elasticity of this arm actually work. The ironic thing is that what failed was not the Kinkos 3,99 rubber bands. What failed was the $75,00 dollar German Ball link (turn buckle) that gives the arm to socket block adjustability for balance of the arm with the relation of the operators most ergonomic position.

Here are some pictures of my $25,000 dollar arm after it failed. Under a normal fast walk while walking on the beach. 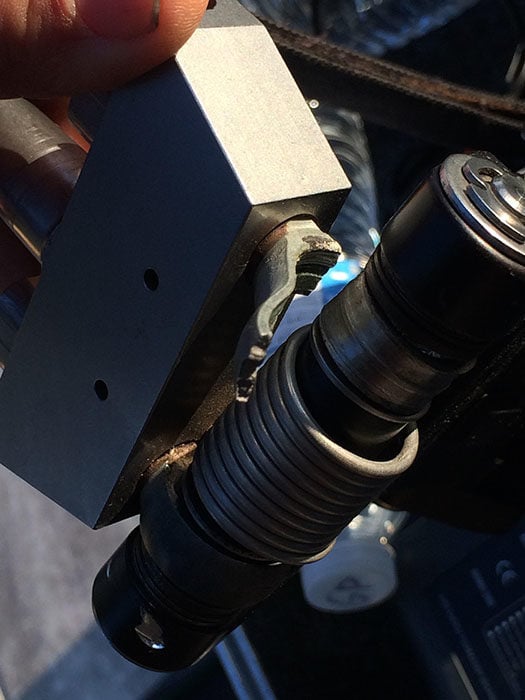 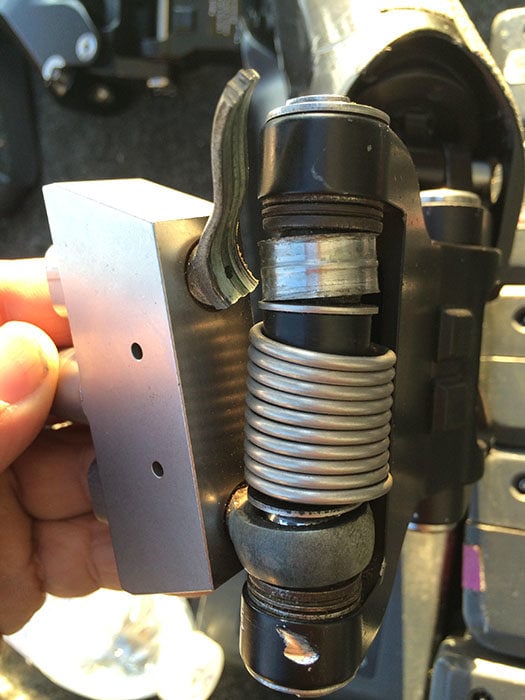 What happened here on this video wasn’t my fault my movements where not out of the standards of how we move when we’re shooting a music video and making fast push ins or fast pull outs while sorting obstacles and on different rugged terrains.

After this happens Nib replaced that turn buckle and his rubber band operated arm was up 10 minutes later.

Update on 6/7/16: Professional Steadicam Operator Eric Fletcher has this to say in response to the anonymous steadicam operator’s statement above:

The update that you posted from the cinematographer that had the rig crash is disingenuous. His failures of his PRO arm were caused by using the standard socket block with a backmount vest — when you use a back mount vest you have to use a different socket block assembly. The rod end assembly is not meant to be loaded in the direction that the back mount vest has it’s socket block receiver. Other statements in his clarification are also blatantly false. The PRO arm doesn’t NOT require “lots of down time” for maintenance, nor does it need to be shipped to Oregon to be fixed. Basic maintenance on the PRO arm is to literally hose it off with water and apply white lithium grease to the drawbars on the spring canisters.

Please reconsider the inclusion of his comments since he is trying to save face at the expense of the leading manufacture of Professional Stabilizer Arms, who was not even involved in this incident.

Update on 7/8/16: The following is a statement we received from NB Stabilizer, which is seen in the video:

NB Stabilizer is a revolutionary stabilizing system, powered by rubber bands. It weights only 3.1 Kg / 6.8 Lb – which is basically half of all other arms out there. This arm can carry any camera from DSLR (or even Iphone) to an Alexa as you saw in the video – a professional film camera – with no minimum weight required. Thanks to its great design, and the rubber bands, boom range is 83cm / 32.7 inch!

All stabilizing system has its manuals. What the operator in the video did, is something you must never do – you must never through away the arm to a straight 180 degrees position.

Technically, the damage in our arm was only a rod end break, Nothing happened to the arm or sled – which is by the way a great proof of durability to our system. In addition, NOTHING happened to the camera since it didn’t touch the ground.

Though we still prohibit this kind of use and operating (as all other manufacturers prohibit as well), we have replaced the arm’s rod ends to much stronger ones, in order to be able to prevent such incidents in the future due to misuse of the equipment.

Here is our video of the extreme testing of the arm with the new rod ends: