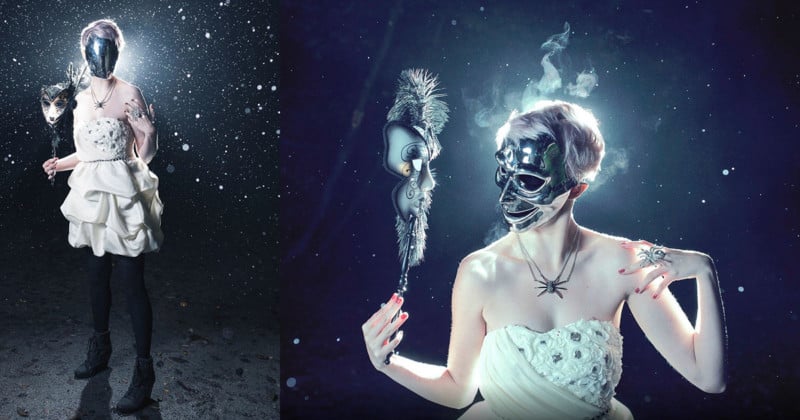 It’s been a pretty dismal autumn in Vancouver. The sun makes guest appearances, but the rain has the stage for the most part. Business as usual, if you’ve ever been here.

I’ve been finding it difficult to go out into the rain and do what I enjoy. Though, it got me thinking – two years ago, a little bit of rain didn’t stop me. Fond memories of one of my first ever photo shoots came flooding back in as I peered over my backlog, relishing in the comfort of a hot chocolate.

I had just picked up my first full-frame camera, the original 5D. Eager to get my feet wet (but not literally) in the world of photography that had just opened up for me, I decided I wanted to book a shoot. A few months back, I was getting some practice in at a local anime convention in here in Vancouver where I met a lovely girl who donated her time to help me practice with a basic, portable lighting setup I brought with me. I was very happy with the shots and her pleasant demeanor, so we swapped information, with the hopes of working with her again someday. Turned out, that day would be this day.

Brooke and I exchange awkward greetings at the entrance to the Skytrain station, we’re still pretty much strangers at this point. She trusts me though – enough to follow me into a scantily-lit forest path nowhere near where either of us live. I pick a rather uninteresting location to stage the shoot, framed by trees, a walking path and a big old rock smack dab in the middle of a fork in the road.

My setup is sort of simple.

Initially, I make the rookie mistake of trying to use the transmitter. Of course, it doesn’t work. I try a cell phone LED, no dice. But then I realize something – I brought my 430 EX II, which grants my aging 5D the superpower of being able to focus in literally zero light, thanks to the high-powered infrared grid that it projects.

I visualize my set-up and then I get to work. I set my Yongnuos to operate in optic slave mode – theoretically, the Canon flash (set to minimum power) triggers one Yongnuo slave, while the other is triggered by the flash of the first Yongnuo, effectively creating a chain of slaves. I test it out, and much to my surprise, it actually works. Turns out that in spite of my having literally no idea what I am doing, I have a few tricks up my sleeve. We get a few ones I like right out the gate, but it felt like neither Brooke or myself have quite hit our strides yet. None of these are kicking my ass. I’m trying different lighting positions, but I eventually pop the second flash behind Brooke to try and create some more interesting shots. Brooke also brought with her a treasure-trove of weird masks, so we start screwing around with those.

While I’m getting light on my images, I’m still composing in utter darkness, and I suck. We shoot for maybe another ten minutes before I feel something wet land on my hand. “Is it about to rain?” I ask, and before anyone can say “kuwabara, kuwabara”, we’re suddenly in a downpour. “I guess we’re done, huh?” It’s hard to strike the defeat from my voice at this point.

“I’m fine, I’m more worried about your gear.” Brooke is a champion. I glance over to my two Yongnuos. They look absolutely miserable. If they break, it’s not like it will cost me an arm and a leg to replace them. I’m more worried about the Sigma, so I tie a flimsy handkerchief around it – not the best solution, but it’ll buy me the time I need.

Disclaimer: At no point am I encouraging you getting your gear wet – none of what I was using is weather sealed, and I was dumb to take the chance. Moisture inside of your lens can cause rust, mold and potentially damage the electronic components. If you plan to shoot in the rain, bring saran wrap, or possibly ziplock bags for your flashes. You can tie a proper scarf around your lens and it should do a pretty good job of keeping water off of it, if you’re in a pinch. With the flash behind Brooke’s head, I notice immediately that two things were happening – firstly, Brooke’s hot breath blasting into the chilly October air has created a pretty cool effect where she appears to be exhaling silvery plumes of smoke. Secondly, with an aperture of f/2.8, not only are raindrops being frozen in thin air, but are also resolving into nice round little particles. 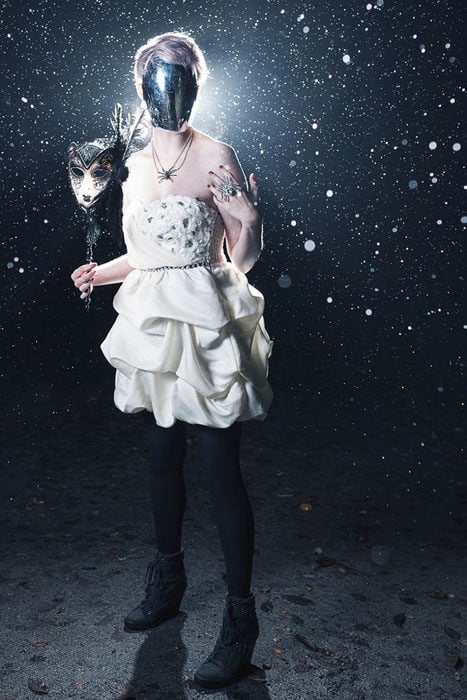 We bang out a few more, wanting to keep things short for obvious reasons. The resulting images are rather dated in terms of my current skill level, equipment and post-processing abilities, but I still like to keep one in some of my current portfolios. Even today it stands as one of my favorite shoots – not only because I like the images I got out of it, but they turned out the way they did because neither of us were willing to give up, even though we should have. I like looking through my portfolio and going “Remember that one time things almost really sucked, and then they didn’t?” Nobody gets to say that as often as is fair. And those two Yongnuos? I used them last week. They’re going strong and showing absolutely no signs of giving up any time soon – and neither should you. So next time you find yourself in dismay over a weather forecast, maybe it’s time to put on your rain boots and go dance.

About the author: Terryis Hamilton is an up-and-coming photographer based in Vancouver, BC. You can find more of his work on his website.

This 360° Video Shows the DSLR Wall on the ISS

An Animated History of the Camera, from 1900 to Today