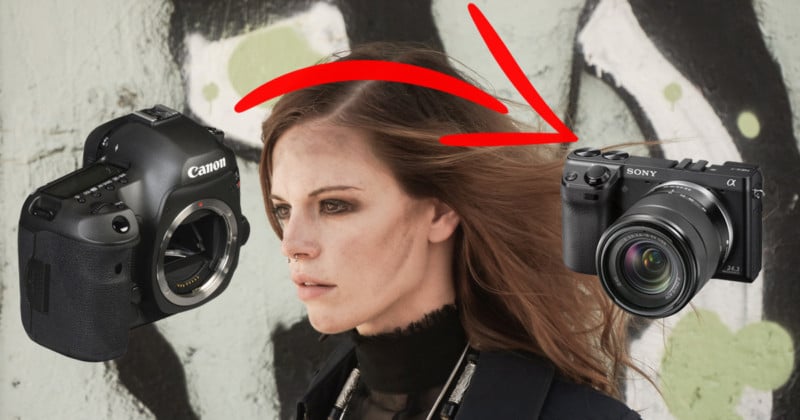 I’ve been shooting Canon for the last 15 years and have finally made the decision to move on. The reasons are not really the focus of this article but rather my process for getting into a new system and making that process a creative one.

Like many of you, I read spec sheets, listen to reviews, and watch YouTube videos to see how one system compares to another; however, at the end of the day for me, it comes down to what works for my style and my workflow. It’s not that I don’t care about megapixels, ISOs, and shutter speeds, but rather that I want the tool that works best for what I do and one that can be easily incorporated into my workflow.

I wanted a hands-on approach. I started at the nearest camera/electronics store and got several different bodies in my hand. I tried out Nikon, Fuji, and Sony. I quickly realized that anything other than Canon in my hand felt somewhat foreign. I tested how each felt in my hand, made note of how the controls were laid out, and did quick focus tests with what was normally a kit lens. I did this several times with several bodies. After much back and forth and reading and re-reading spec sheets, I finally decided to take the next step.

I decided that I wanted to get into a mirrorless system; The a7R II and a6300 were my primary targets. But after creeping out the Best Buy sales guy who probably thought I was stalking the camera department, I decided I wanted to try it for a more extended period of time before buying. Renting was not really ideal. I wanted to live with it for a month or so and not just a weekend. While I do rent lenses and such from BorrowLenses.com and LensRentals.com, doing this with a body can get pricey.

Since I had never shot mirrorless before, and not wanting to invest into something that may not work, I opted to find an older body to buy vs rent. I found a demo Sony NEX-7 at Frye’s here in L.A. on clearance for $229. Renting this body for a month (plus shipping) was almost exactly the same, but I could live with it longer than a month if needed. With basically the same form factor as the new models and slightly older tech, I new if I could live with this one I could live with the newer bodies. 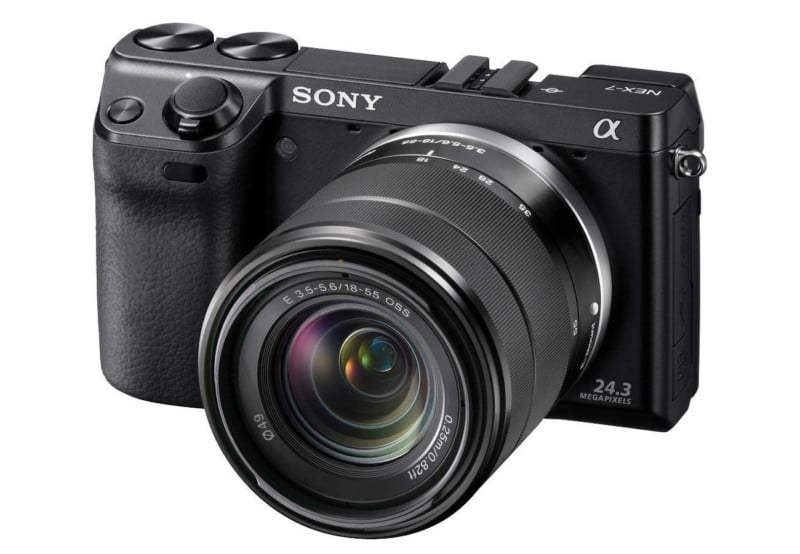 My first several outings with the camera were quick little photo trips to the Mojave, Sequoia National Park, and Palm Springs areas.

One of my concerns going into mirrorless was the EVF. After all this time with OVF, would it be an issue for me? Not at all. Even with the somewhat older body, I had no issues focusing, framing, or seeing my scene. Getting WYSIWYG while adjusting the setting was phenomenal.

Next on my list of “would this work” was to determine if it could be used as a primary for something other than travel snaps. I shoot mostly fashion and beauty. I don’t shoot sports and rarely shoot events. To test this I planned an editorial shoot with the beautiful Ellen Monohan where the primary body on the shoot would be the NEX-7 accompanied by two film bodies.

Ellen is an actress and a model and her acting skills come in really handy for the way I prefer to have models move. She is also the ultimate professional. She does what needs to be done to get the story right. For this story that was pretty much “cover yourself in dirt, spend a few hours in 100-degree heat, and get up stupid early in the morning on a Saturday.”

To make the shoot more interesting and to throw in another creative twist I opted to shoot Film and Digital to see if we could get a story using both formats and make them flow.

My medium format body is a Pentax 645 that I picked up on eBay for about $200. It came with the 75mm f/2.8. While that’s a decent focal length to work with, you have to focus manually. There’s no AF on this bad boy, and while that’s all well and good for landscapes, it’s a bit of a trick when trying to shoot people wide open.

The other film body I used was the Canon EOS-1. The first in the EOS line, this one does have AF. I chose to shoot my nifty fifty for this particular shoot. This body was also an eBay pick up at a whopping $75.

For the film, I went with Kodak Tri-X 400, Ilford HP5 400, and Kodak Portra 160 (pushed to 320). Portra pushed to 320 gave me some very nice desaturated colors that worked well with the theme. The Tri-X and Ilford were processed normally. All my film that I don’t develop myself I send to Richard Photo Lab here in Santa Clarita, CA. They have amazing quality and go above and beyond to get it right. 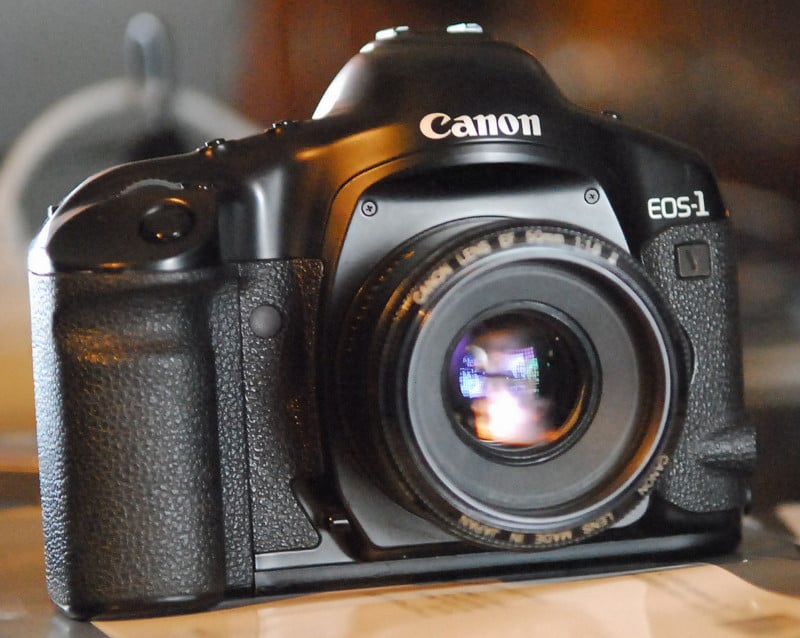 The first thing you understand after shooting SLR’s for years and picking one these (mirrorless) bodies up is the size. They are much smaller (to me) and compact. My first impression was that it would make a great travel camera (and it does). On set, it actually wasn’t too bad in the hand (after a little time getting used to it). I am 6′ tall and 195 lbs—I’m not Sharky James tall but not a small guy either (see Jason Lanier). For me, for the duration of the shoot, it was fine.

If I have one gripe (and really just this one) it is that while changing the focus point it was very easy to accidentally change the ISO. The dial used for ISO is the same “pad” used to move the focus point. After making this mistake a few times I paid more attention and it didn’t happen the rest of the shoot.

For me, the complications came in when I wanted to change the settings. I had no idea where anything was. Coming from a Canon body it was very foreign to me (the menu layout). That being said, after working with the body on a regular basis I started to get the hang of where everything was and it was no more frustrating than when I pick up any other camera that I hadn’t used before. Is it Apple UI (should not need the instructions to make it work) friendly? No. It is not, however, as complicated as many reviewers made it out to be in my opinion.

I’ve used a 50 Megapixel camera (Canon 5Ds). As a matter of fact it was my primary body until just recently. I understand the benefits of all those pixels. I also know the downside. While you may get a boost in dynamic range, detail, and have more freedom to crop, you also get massive files that have to be dealt with in post. 24 Megapixels (half the 5ds) seems small but for small prints and Web use it is perfectly fine in my opinion and saves on storage and loading time in post. I would also go as far as to say that most headshot shooters, wedding shooters, and portrait shooters could very easily get away with this size sensor.

While megapixels are all the rage I can pretty much guarantee that your clients using these image on business cards, comp cards, or even in a magazine don’t know or care about any of geeked out specs on your camera. They just want good images. Shooting a billboard… OK now go get your pixel monster (although you don’t really need it for that either…).

The battery in the NEX-7 lasted the entire shoot, but since it wasn’t the sole camera being used that’s probably not a fair test. Since that shoot, I’ve used it on several weekend excursions and for the most part it lasts the entire day.

The image quality and using the EVF (even in this slightly older body) was quite rewarding. I thought this would really be the drawback for me. It was not. Seeing the changes I was making in real time was outstanding.

I lived with this camera for a good six to eight weeks; at the end of my time with it, I was sold. I could, in fact, use this professionally and have no reservations about doing so. It felt good in my hands, focusing was great, image quality was superb, and the smaller form factor was actually a positive for me. I love that I can get two or even three of these size bodies in a case where before I could barely get one and a lens. Fast forward and now I have an a6000, a6300, and waiting on my a7R II.

At the end of the day, a good image is still made with good light, composition, and an interesting subject. It’s not dictated by sensor size or even brand for that matter. It’s what you do with the tools and buying gear what works for you. I did not use “L” glass (sold those) on the EOS-1 and I used the 16-50mm kit lens on the Sony NEX-7 for this shoot.

The resulting images from our post-apocalyptic story “Out of the ashes” can be seen below (captions detail camera details).

About the author: Steven Starr is a fashion, beauty, and editorial fashion photographer based in Los Angeles, CA. You can find more of his work on his website.