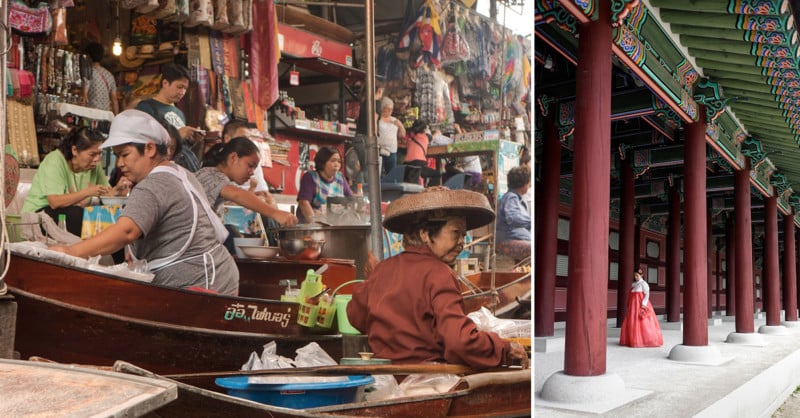 I am a street photographer currently based in Manila, the Philippines. I prefer to photograph the streets alone or with a non-photographer, but on the occasions when I do shoot with fellow photographers, I tend to find myself painfully trapped in conversations about gear.

Given the impact that digital technology has made, this obsession with gear is understandable, particularly with my generation. I was born in the 1980s, and grew up witnessing photography’s transition from film to digital.

During my childhood, I had enjoyed film photography as a hobby, but saw the development process as a tedious chore. Things changed a few years later, and I still vividly remember the first time I picked up a digital camera. Although the image quality was dire, I was struck by how the camera allowed you to instantly view your images on the back screen, and upload them to the computer without hassle. Within seconds it was clear that digital cameras were going to revolutionize the way people took photos, in the same way that the iPod revolutionized the way people listened to music.

Fast-forward to today and technology has rapidly improved, with the public still in awe at the ever-advancing capabilities of digital cameras. Manufacturers have capitalized on this consumer culture, with many photographers openly admitting to suffering from Gear Acquisition Syndrome or GAS.

Indeed, there are an increasing number of photographers that are more concerned with the way the camera captures the image rather than the emotion behind the image itself. And while I must admit that the term ‘emotional image’ maybe not what many photographers are accustomed to, I feel that it is a more suitable phrase to use than ‘quality image’ since, in this day and age, image quality means something completely different.

For many, the quality of an image is used to describe pixel number, edge to edge sharpness at 100% zoom, colour accuracy, the absence of moire and colour fringing, smoothness of bokeh, microcontrast, clean high ISO levels, absence of lens flare, dynamic range, and so forth.

Many photographers who have focused on achieving maximum image quality have produced photographs which, according to computer tests and loupe analysis, are just that: pieces of work that are technically perfect, or very close to it. Indeed, it is easy to argue that the technical image quality achieved by a mid-range camera today far exceed the technical quality produced by the majority of 35mm film cameras used by the master street photographers in the early to mid 20th century.

However, it is interesting to note that such technically perfect images tend to lack story, lack questions, and what is in my mind most damning: lack emotion. The majority of street photos nowadays are images of people walking in the street, a woman waiting at a bus stop, a man eating at a café, buildings stretching up into the air, or a handful of autumn leaves on the ground. By distracting themselves with technology and image quality, street photographers today have forgotten that photography was originally conceived as a form of art.

A perfectly rendered photo of a person walking from A to B with pleasing bokeh and critical sharpness is still just a photo of a person walking from A to B. The photo may be made a little more striking because of the person’s unique fashion sense or facial features, and by shooting in black and white or applying a little synthetic vignette, the photographer may be able to give an impression which some would consider artistic. However, the brutal truth is that without a story, without an emotion, an image is forgotten by the audience within 7 seconds, which is often 6.9 seconds longer than the time it took for the photographer to conceive the image before pressing the shutter.

This is, I believe, what sets aside many of the greatest street photographers from the others. Most street photographers reading this will be familiar with the works of Sebastiao Saldago, Henri Cartier-Bresson, Fan Ho, Steve McCurry, Mary Ellen Clark, and many others, and agree that a great deal of emotion tends to pour out of their work. It is no surprise that, when you listen to or read about how they feel about photography, gear is not their main concern. They only mention their gear when forced onto the subject, while Fan Ho couldn’t even remember the exact model of cameras he used to shoot with.

I would even argue that some of their famous photos are images which, from a technical viewpoint, rank very low in comparison to any street photographer carrying a mid-range mirrorless camera today. And yet, the works of these old greats are still revered today simply because they captured a story or emotion so powerful, so unforgettable.

The age-old mantra that has been repeated by many before is that the most important element of photography is not the camera, but us, the users holding it. I would argue that we should first ask ourselves what story or emotion do we really want to express through photography before we even pick a camera up in the first place.

About the author: Jonathan Hodder is a British-Filipino street photographer working for the United Nations in Southeast Asia. You can find more of his photography on Instagram.

This Photographer Turned a Potato Into a Camera

These Shots Helped Me Win the British Army’s Photo Contest