Remember in the movie Top Gun, when Goose and Maverick go canopy to canopy with a Russian jet, and Goose snaps that Polaroid? Advertising photographer Blair Bunting wanted to find out if it was possible… so he convinced a jet team to let him try it.

First things first, here’s the scene in case you haven’t seen it or don’t remember it:

Bunting teamed up with fellow photographers Jaron Schneider and Toby Harriman of Planet Unicorn Productions and the Patriots Jet Team from Byron, California to find out if a shot like this was (a) even possible and (b) if it would have turned out.

What started as a napkin drawing and a bit of fun speculation between photographers (and a pilot) was about to become a real life photo shoot. 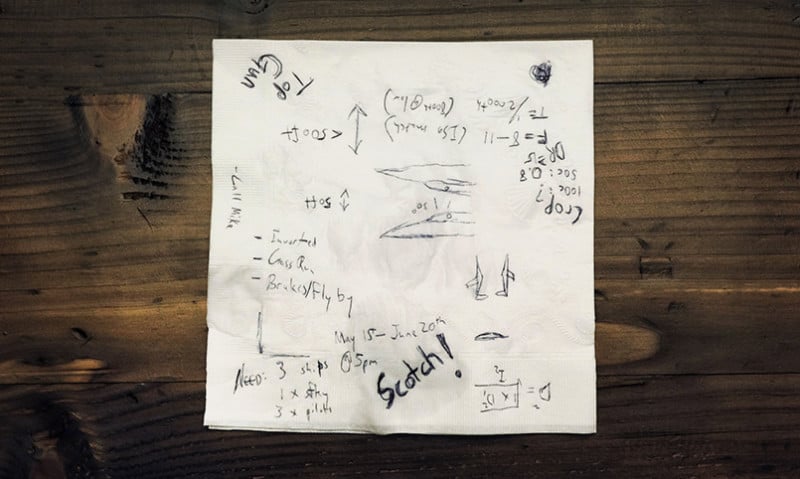 Of course, the fantasy that was this photo shoot and the reality of pulling it off were two very different things.

“The preparation that had taken place before [the shot] was … immense,” explains Blair on his blog. “I had spent hours laying upside down off the side of my bed in my hotel room the night before so that I could learn how the camera operated while inverted. I went to the gym six days a week and exercised with a trainer that helped me build my endurance while being on top of my hick breathing to stay conscious. For an hour before we got in the jets I went through neck exercises to see if I could loosen it up enough to look behind myself more or less. All of this work boiled down to a shot that still would be 90% luck.”

And the prep was just the beginning, the strain of being in these L-39 Albatross training jets without a G-suit on and pulling Gs while hand-holding a Hasselblad H6D with a 35-90mm lens attached was immense.

“My body was getting destroyed at a rate that no gym workout could compare to,” describes Blair. “Don’t get me wrong, I was having fun, but I was in an immense amount of pain. This was apparent after we landed and saw that the capillaries of my shoulder had exploded from the pressure.” 30 minutes into the flight, they began setting up this photo over and over again. Blair’s jet would roll inverted at an altitude of 500ft, and then the second jet would inch up closer and closer while Blair called out positioning to his pilot.

“I would call ‘forward, forward, forward,’ and I could see the pilot below as he slowly dialed his plane faster all while looking me right in the eye,” describes Blair. “It was one of the more surreal moments I have ever been in.”

When the jet was in position, Blair would set his lens flat against the canopy above (or in this case below) him and fire off as many shots as he could before the special tanks that allow the plane to fly inverted ran out of juice. This, over and over again, a crushing workout all to find out if the shot was possible. 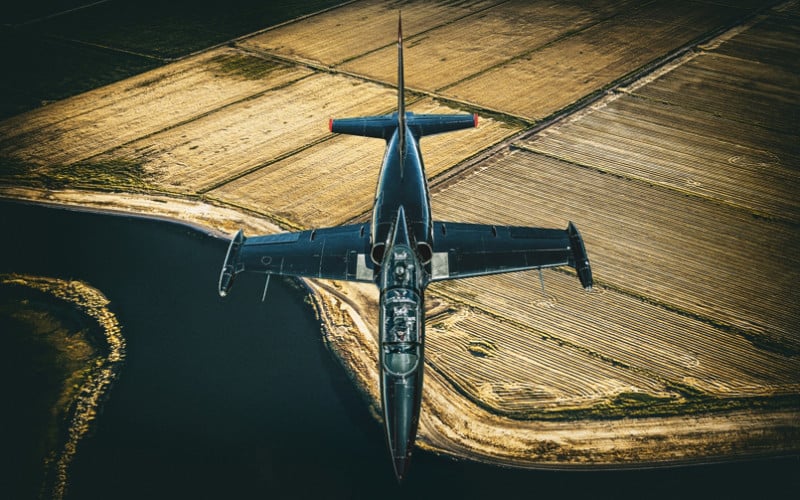 On one of those passes, Blair got the shot he was looking for and proved that, while Goose probably didn’t get anything, he could have.

“Looking back on it, I am overwhelmed and grateful,” concludes Blair. “To all the incredible people that put in so much time, effort and money, just to see if something drawn on a napkin was possible, I am eternally grateful.”

Check out the full adventure in the video at the top, and then, for an in-depth Behind the Scenes look at how the video shoot of the photo shoot came together, head over to Planet Unicorn Productions.

Image credit: All photographs by Blair Bunting and used with permission.