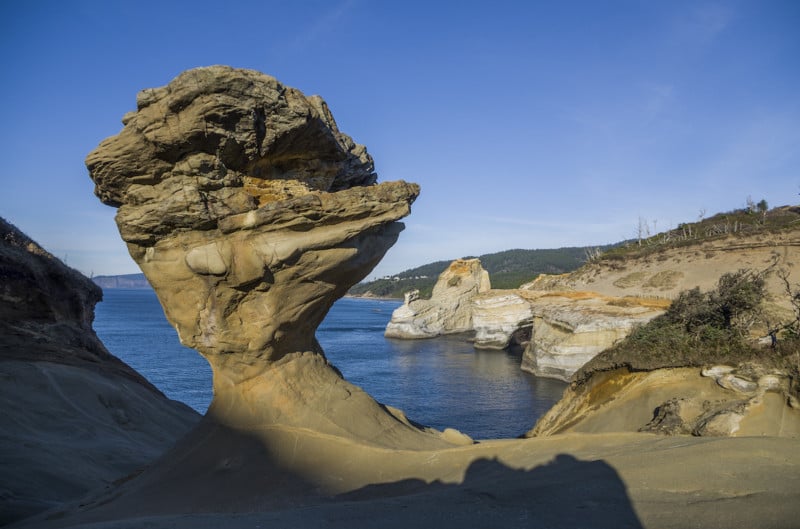 A group of vandals have been caught on camera destroying an iconic rock formation on the Oregon coast known as Duckbill Rock or Thor’s Fist, prompting many to both mourn the icon’s loss, and call for justice against the videotaped vandals.

The sandstone pedestal at Cape Kiwanda was a popular tourist attraction, despite the fact that it was in an area roped off to visitors. So when the rock was first reported to have collapsed, Oregon State Parks announced the sad news and said they did not believe the collapse was caused by humans.

However, a man named David Kalas has video proof that it was, indeed, human idiocy that spelled the end of the landmark.

Kalas told KATU News that he was helping a friend film parts of the coast with his drone when they saw a group of people trying to push Duckbill down. At first he laughed at what he saw as a futile attempt… but then the rock began to shift.

“I noticed that it started wobbling,” he told the local station, “and then I started to record it as two of the guys managed to knock it down.”

Apparently, Kalas then asked the vandals why they destroyed the rock formation, and got a self-righteous answer in return. “[They said] their buddy broke their leg earlier because of that rock,” Kalas said. “They basically told me themselves that it was a safety hazard, and that they did the world or Oregon a favor.”

Of course, once the rock was down, they stood on the crumbled remains, snapped a few photos, and left.

As was the case with the amateur filmmakers who were caught on camera breaking the rules at Yellowstone, the response has been swift and furious. In addition to posting many old photos of the rock—including a proposal on the Duckbill—people are calling for the authorities to find the vandals and hold them responsible.

Judging by this statement Oregon State Parks sent to Resource Travel, the agency seems inclined to comply with the request:

The Oregon Parks and Recreation Department, in cooperation with the Oregon State Police, will review the incident immediately and decide how best to respond. The department takes vandalism of a state park’s natural features seriously.

If you have any information regarding the people in this video, you can contact Oregon State Parks here. Otherwise, scroll down to see a few of the photos posted in honor of the fallen pedestal.