If you’ve been using a channel mixer adjustment layer to help you properly dodge and burn portraits, listen up. You’ve been doing it wrong, and retouching expert Daniel Hagar wants to explain why.

This Photoshop tip was released as part of Hagar’s “Breaking Bad Retouching Habits” series on YouTube.

As he explains in the video, it is a good idea to use a high contrast monochrome help layer when you dodge and burn. It’s easier on the eyes, makes flaws more visible, and accentuates the tonal relationships you’re trying to alter. However, Hagar wants you to know that the oft-used technique of using a channel mixer adjustment layer as that help layer is a no-go. 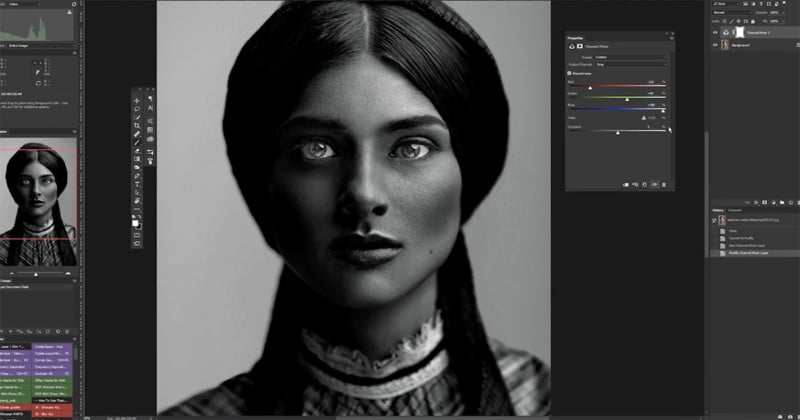 He explains it in more detail in the video—and in extreme detail in this blog post—but the gist is this: what you want out of a dodge and burn help layer is something that lets you focus on the luminosity values, but using the color mixer to add contrast by dropping the reds and amplifying the blues doesn’t accurately represent those values.

So, if you use this common technique, you’ll think you’re making the right adjustments only to turn off the help layer and find, in Hagar’s words, “disharmonies and patches on the skin that weren’t there to begin with.”

While you can set up the channel mixer a different way to avoid this, Hagar makes a few other suggestions that will work better. Next time, try a black & white adjustment layer set to saturation blend mode, or a neutral color layer set to color blend mode instead. Then add contrast with a curves adjustment layer. These options will let you focus on the luminosity values without misrepresenting them.

Check out the full video up top for a step-by-step demonstration.