Researchers in MIT’s Computer Science and Artificial Intelligence Laboratory are quite literally letting you reach in and touch pieces of an image using just a few seconds of video and their “Interactive Dynamic Video” technology.

The algorithms are pretty incredible, and they’re entirely based on tiny vibrations. Take this photo of a spring man: 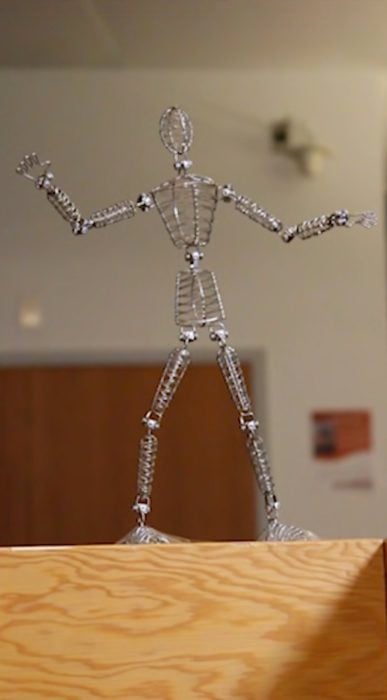 By recording 5 seconds of video during which the researchers banged on the table to see how the man “moved” in response, they created an interactive image that lets you move the little guy around. No 3D modeling required.

They then do the same thing with a much more complicated subject: a bush. Instead of 3D modeling the highly-complex shape, they just shot a minute of video of the bush moving naturally in the breeze, plugged it into their algorithms, and now they can move the bush as needed.

The tech can even be used to insert digital characters into a real world shot and have the two interact. That Pokemon you’re trying to catch, the one sitting on top of your computer screen right now, using this tech it could actually make your computer screen “shake” by bouncing up and down.

Of course, there are other, more practical uses beyond Hollywood and Augmented Reality games—structural safety testing of older bridges for example. We’re just excited by the possibilities.

To learn more about this impressive technology, check out the video at the top or read the MIT article on the CSAIL website.

(via The Next Web via DPReview)

This is Canon’s Crazy DSLR Stockpile at the Rio Olympics

Lighting Portraits with a Lume Cube