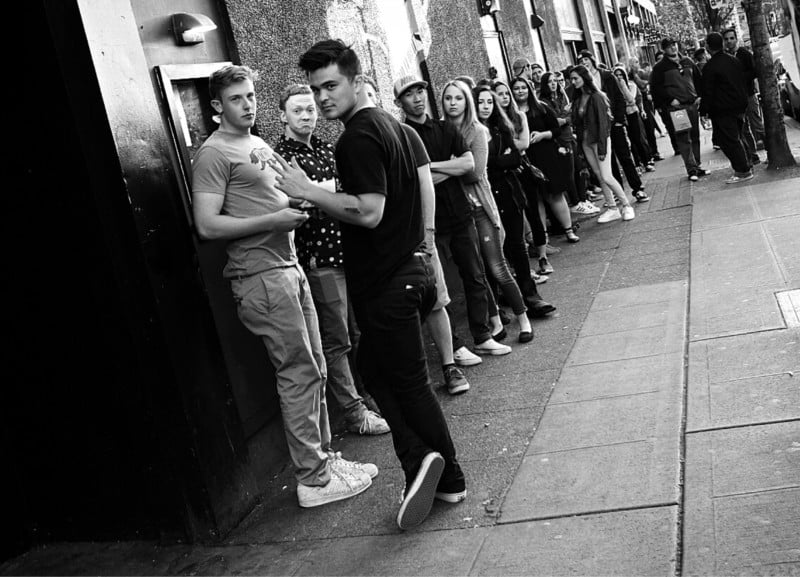 “Being a man [street photographer] is way harder. People will think that you are a creep if you take photos of children and women.” – reader comment on my last article on public privacy

I’m 5 feet tall on a good day. People always ask me for directions and children look me in the eye. I’m low-profile and not threatening and, with my black clothes and small camera, I easily disappear into city crowds. Being a women makes me vulnerable on the street, but is an advantage as a photographer.

On the flip side, when photo subjects do notice me, some do see me as a threat to their privacy or space. Being on the receiving end of those looks is a new experience that I’ve only had in life by being on this side of a lens. Either way, it’s a delicate balance of personal safety and social awareness.

Well-known female photojournalists and street photographers, both past and present, are few and far between—Mary Ellen Mark and Vivian Maier are among the best known. List after list of top photographers online or in magazines will have maybe one or two women, if any. While this is as much the result of lack of recognition as actual numbers, we are still rare enough that I get excited to meet others, and they in turn say they’re excited to find my work. I do think that being a woman grants a different kind of access to or received gaze from subjects. This is especially true when photographing other women, and they are most likely to be the ones I will approach if it seems like they want to engage. A common type of thing I would say is: I love your dress / style / energy /etc. You look great. I can send you the photo if you want. In general, I nod or smile or say hello to people if they notice me when out shooting.

Male subjects I am far more cautious with, from who I will take photos of to the fact that I’ll rarely walk up to them afterward (and usually only if they’re in a fixed location, e.g. sitting at a sidewalk cafe and unlikely to follow me). I don’t photograph male subjects who seem angry or aggressive or chaotic if I think there’s a chance I’ll be noticed. But, in some ways it’s easier to photograph men as they’ll often openly welcome it. (Maybe too much so in some cases, but not usually.)

This is one of my favorite photos from this year: I love how noir it feels with the whole waterfront scene, timeless Ferris wheel, and mysterious smoking figure with a dark and brooding gaze.

Now look at the shot on my camera roll right after it, after he notices me: It’s a warm and gentle smile, a look that I imagine a woman is likelier to receive. And I was probably smiling back. This sort of human connection is one of the things I find most compelling about shooting strangers in the wild. I see you. You see me.

“Don’t be afraid, you are a woman and this is an advantage. People are more compliant with women. Go out, shoot and smile.” — Elizabeth Char

So far I’ve mostly only shot in North American cities where I blend in and have native intuition about street culture and personal space. Soon I’ll be traveling around Europe and Japan, and am especially curious to see how it’ll be to hit the streets where I am visibly a foreigner and tone-deaf to local ways. Will I get more of a tourist’s “free pass” or strange looks? I find that similar rules apply both to being a solo female traveler and being a lady photog: More risk, but more and closer access to people because I am not threatening. And again, especially to other women.

Given the different personal safety and perception concerns that male and female street photographers have, I have many questions about the potential differences in their work. Do their subjects look at the lens differently—how do they respond to the photographer in front of them? Do women photographers tend to choose female subjects more than men? Less? Same? And many more. I’d love to have a larger and more diverse field of work to study and be inspired by.

Why are there not more female streettogs? Historically—and still, in many countries and cultures—women have not had the freedom to occupy public spaces in the same way as men, or to travel as freely as men, or even the means to own their own cameras.

“Women are stepping up… slowly… and we are starting to take up space and reinterpret the street genre. As the numbers even out, the energy will even out. The intelligence and soul are there, and the edge is there, but it’s a powerful female energy that feels modern to me.” — Sally Davies

Freedom of movement, cameras in every pocket, and global community are opening the doors wider for everyone. As far as the answers to my questions, I look forward to finding out as more and more women take on the streets of the world.

Are there any female street photographers that inspire you (or are you one)? Let me know in the comments.

About the author: Jill Corral is a Seattle-based photographer and UX designer currently on sabbatical to travel the world. You can find more of her photography on her website or by following her on Instagram, Twitter, or Facebook. This article originally appeared on Medium.

How the Fujifilm X-Pro2 Was Designed for ‘Decisive Usability’

Surreal ‘Chronophotographs’ of Birds in Flight