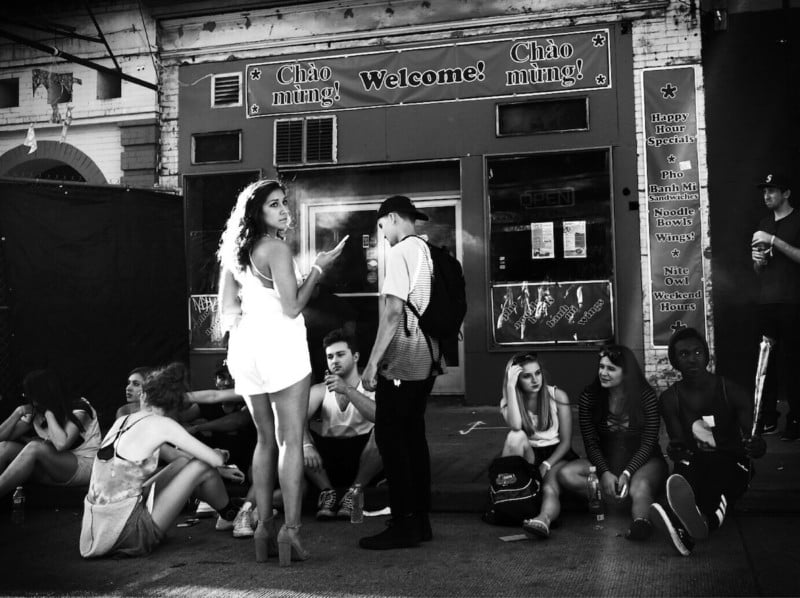 “Hey, don’t take our picture!” a young woman yelled out from her group to me a few days ago. I told her I didn’t take their photo—and it was true, I was just facing them playing Pokémon Go on my phone as many others were also doing in the park that day. But, often I am doing just that.

As an active street photographer and generally a private person myself, the question of what is a fair subject for my lens is constantly on my mind. And in the age of social media, what is fair or ethical to share to the public.

I’m often asked about this by friends or people who see my work. On Twitter recently, a follower asked me about it, and I was glad for it as it made me put my freeform thoughts about it into words: 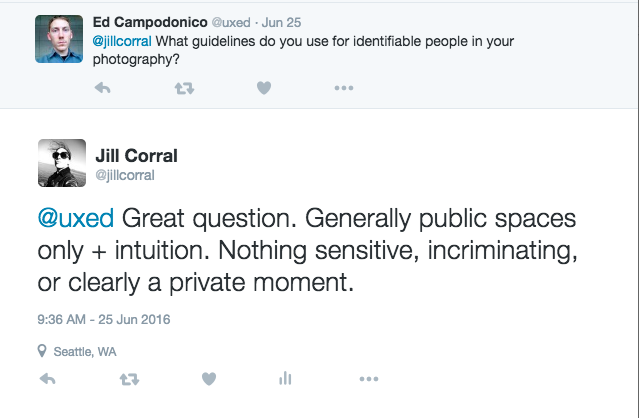 Then he asked: Do people ask about seeing the outcome? And I responded: Sometimes, rarely. I will always gladly delete or send it to them if requested. I also would not post if clearly an unwelcome capture.

In the United States, public space photography of pretty much anything is legal. And as far as identifiable faces, there is no need for model releases so long as a photo is not used for commercial ends (such as advertising or stock photography). But none of this is what I’m talking about here.

“I’m known for taking pictures very close, and the older I get, the closer I get.” — Bruce Gilden

While I find some of his work intriguing, I’ve seen videos of him shooting on the streets and share Joel Meyerowitz’s sentiment: “He’s a fucking bully. I despise the work, I despise the attitude, he’s an aggressive bully and all the pictures look alike because he only has one idea—‘I’m gonna embarrass you, I’m going to humiliate you.’ I’m sorry, but no.”

That is one end of the spectrum, and the other is being so timid that your camera roll is full of dogs and sleeping homeless people and the backs of people walking. Between these extremes is the intersection of empathy and taking vivid and captivating pictures that tell the story of a person or a place or a moment in time.

Is it voyeuristic? Yes, in that it is about seeing. And there are as many ways to do that as there are to live. You can be creepy or curious, aggressive or gracious.

Bill Cunningham, the beloved and celebrated fashion street photographer for The New York Times, devoted his life’s attention and considerable talents to capturing people being fully themselves in their natural habitats. It is clear in his decades of work and in his own words (in this great documentary) that he was there to bear witness to beauty and style. He was all about respect and admiration and celebrating his subjects, and by every evidence people enjoyed seeing him coming with a camera.

Why do I do it? So many reasons. People are fascinating. I can look at street photos endlessly—from any time or place. I spend many many hours a week traveling the world through Instagram hashtags like #everybodystreet or #lensculture or #streettog. I love the magic of fleeting everyday moments that will never happen again. I love cities and especially my city and my neighborhood and want to capture its citizens and energy, right now and forever. I love to capture all the different things that happen on that one same street corner over the years. I love the theater and chaos of an ever-changing cast of characters, how they look and how they look at each other. I love big shows of audacity and the small quiet moments in the eye of the storm. Endless fascination. 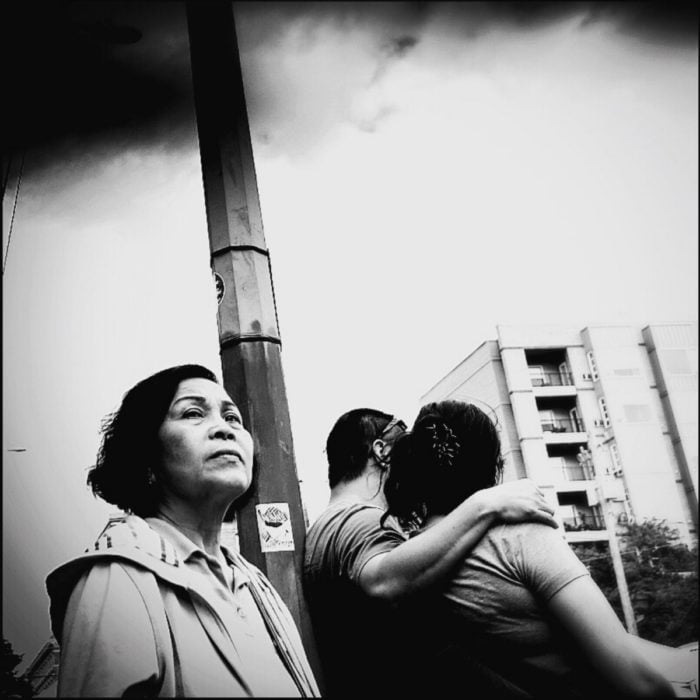 But however good my intentions or avid my interest, people have a right to their privacy wherever they are. It comes down to tuning into their cues, reading their signals, and then coming closer or moving away. Empathy, instinct, and generosity of spirit.

People have a greater or lesser sensitivity depending on the environment. In big busy cities, there is not much personal space—bodies are side by side, and there are cameras everywhere and nobody cares. It’s a different story on a quiet day on a sparsely-populated street. Or at a music festival where bodies are against and on top of each other and wanting to be seen and practically jumping in front of your lens.

Every photographer of people in the wild, whether an amateur “streettog” or a world-class photojournalist, has their own internal compass on what they will they will capture and how they will do it. The “how” is as interesting to me as the “what” and is the challenge that drives many of us to hit the streets.

In the beginning, I’d approach people and ask to take their photo, which most of the time would result in a yes and, of course, a posed photo. Not what I wanted. Street portraits are fantastic but not what I find compelling to shoot.

… the majority of photographs I take of people—people are either charmed by it, honored, or find it humbling. However it depends on how you do it. If you do it in a sneaky manner and get ‘caught’—people are going to be pissed off. If you do it openly, honestly, and smile a lot—people won’t feel any negativity towards you. Sure you are going to get some people who look at you funny or some people who ask you to delete the photo—but that’s pretty much the worst that ever happens. — Eric Kim

As a physically small female, I am no big swaggering Bruce Gilden. My default street awareness is the same as any woman: low-level vigilance for potential threats, dialed up or down by location or time of day. And I generally fear confrontation. The anecdote I start this article with couldn’t have been a more harmless scene: sunny afternoon in well-populated park, shouted at me by a tipsy young woman sitting with a group of friends. But it still made my heart race and my cheeks flush. It is somewhat for this reason that I operate with a low profile.

Here’s how I work these days: I hold my camera in my right hand with its strap wrapped around my wrist. I shoot from hip level, rarely bringing it up to my face; partly this is my overall unobtrusive style and partly it’s the fact that my camera doesn’t have a viewfinder (just a backscreen), which I prefer. (It’s something of a modern-day Rolleiflex camera, which Vivian Maier used.) I use a fixed 28mm wide-angle lens which captures whole scenes unless I am very close. I set it to a high-speed sports mode and shoot as I walk, rarely stopping. As I walk, I get in a meditative mode, responding instinctively to sudden sounds, clamor, activity or flashes of light. I don’t overthink it. Shoot now, delete later. 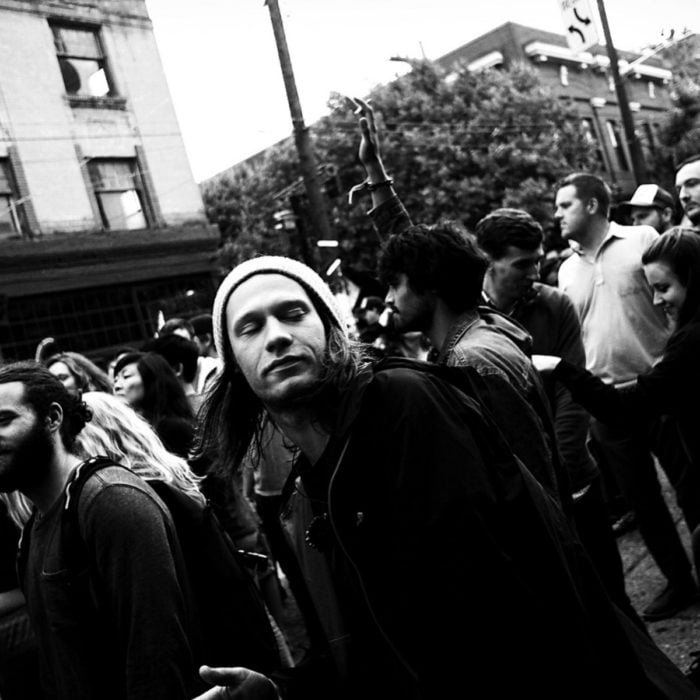 If someone sees me taking their photo, I smile and nod and say hello if they are close enough to hear it. If they look like they’d rather me not be there, I’ll walk away. Sometimes I walk up to people if they look like they want to engage or would like to have the photo. Getting over the fear of directness and potential confrontation is my biggest challenge in photography, and I am evolving these skills. Openness of spirit and action is everything.

There are many beautiful photos that I’ve taken but won’t publish, because they fall outside my own guidelines. They include tender moments of love or anger or vulnerability that seem too intimate to share. Sometimes they are not-quite-illegal activity that nevertheless might not be professionally helpful. In all this, I am mindful of the emerging and widespread use facial recognition technology. The same wide-open world that makes street photography more globally accessible and immediate than ever also, not surprisingly, can make it more sensitive than ever.

I always gut check and ask myself: Why am I drawn to this person or scene? Why do I want this photo? Would I mind if someone took or publicly shared this photo of me?

For the record, I love when people take pictures of me on the street. Knowing how I myself operate, I think that I must look cool or some other vain thought, or that if I’m hideous or doing something terribly wrong then at least it’s interesting.

“The problem is I’m not a good photographer. To be perfectly honest, I’m too shy. Not aggressive enough. Well, I’m not aggressive at all. I just loved to see wonderfully dressed women, and I still do. That’s all there is to it.” — Bill Cunningham

Goodwill and curiosity and appreciation. Amen.

About the author: Jill Corral is a Seattle-based photographer and UX designer currently on sabbatical to travel the world. You can find more of her photography on her website or by following her on Instagram, Twitter, or Facebook. This article originally appeared on Medium.

Adorable Portraits of Dogs Before and After Their Haircut