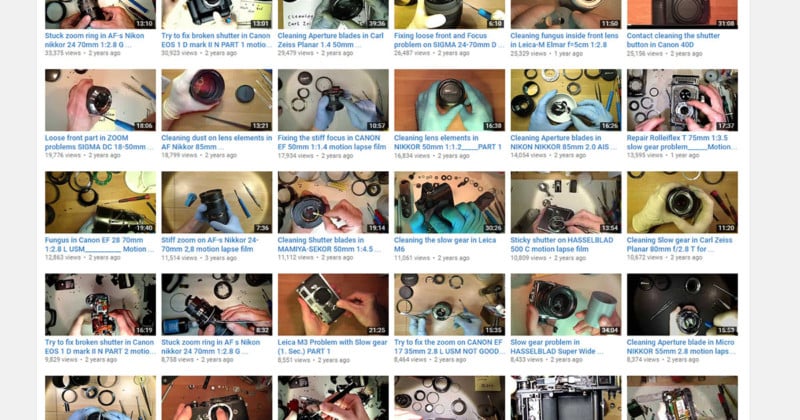 Have a broken or malfunctioning camera or lens and want to try your hand at a DIY repair? If you’re intent on ignoring the manufacturers warnings about doing so, you should check out the YouTube channel mikeno62.


The videos are created by a handy repair guru named Kenneth who lives in Denmark.

“I like doing repair of almost everything that can be disassembled and of course assembled again,” Kenneth says. “It gives me a good feeling when I have done a complicated repair, it’s just like a really good puzzle.”

To give you a taste of what videos in his channel are like, here are some of the most viewed ones so far…

Fixing a broken shutter in a Canon 1D Mark II:

Cleaning dust from the lens elements of a Nikon 85mm f/1.4:

If you have a broken piece of gear that’s out of warranty and collecting dust on your shelf, and feel daring and would like to attempt some surgery yourself, give this YouTube channel a search to see if he has covered your camera or lens before. You might just get enough courage and insight to attempt the fix.

It goes without saying that repairing complicated equipment yourself is risky business — do it wrong and you could mess things up really badly, so proceed at your own peril.