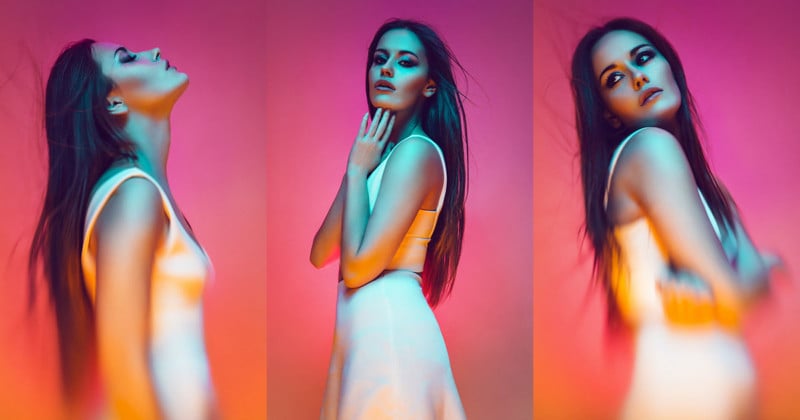 At first glance, it seems like an easy thing to achieve: how hard can it be to get a great looking gelled background in your portrait?

As anybody who has used gels in the past will tell you, there are certainly a few key things to pay attention to if you want to avoid those flat, washed-out and uneven gelled backgrounds. If instead you want clear, saturated, and brightly colored backgrounds by using gels alone, then simply read on.

First off, why even use colored gels rather than a colored backdrop or Colorama? There are a couple of reasons but the most popular is usually just simply variety. All you need is one white wall and you can quickly and easily shine hundreds of inexpensive gel colors up there and change the look in a matter of seconds.

Gels also have the ability through lighting to add depth via hot-spots and vignetting whereas a Colorama is a fixed tone all over. Colored backdrops are also crazy expensive, especially if you want multiple colors. You’ll have spent hundreds long before you ever get more than a few different colors in your collection.

The biggest limitation of gels over the simple colored Coloramas is that you can’t light the model if she’s standing right next to the background — not without washing out the gel’s color. Gels are also pretty tricky to shoot full body shots with. If you’re shooting full-length fashion shots and you want the gel color to cover the background and the floor under the models feet then yes, a seamless Colorama style backdrop is going to be the way to go.

If, like me, you’re happy to never photograph another foot ever again, then gels is your inexpensive, varied, and simple-to-use colored background of choice.

So let’s take a look at how to create that perfect gelled background. Firstly there are a couple of options to consider in the finished look. On one hand you can go for a flat even color and tone across the background of the image or you can go for a vignetted look that consists of a hotspot of color that tapers out to shadows towards the edges and corners of the frame.

There’s no right or wrong version here, just personal preference. But whichever version you’re trying to achieve, there are three basic factors that you can control to achieve the look you want.

By taking control of the following three factors you can manipulate the look and effect your gel has on your backdrop.

1. Exposure: This is the power of light you pass through your gel.
2. Lighting Modifier: This is the type of lighting modifier you choose to use in conjunction with you gel.
3. Gel Distance: This is the distance of the gel to the background you are trying to color.

The following results and ideas are all based on shining a gel against a white wall or backdrop (yes you can shine them against different colors but that is a topic for another day).

This one is the easiest to control but also has the most effect on the result. You cannot light meter a gel because a gel changes tone with more or less exposure. Some gels like the richer colors of reds and blues will often look a lot better with less power passing through them, while some lighter colored gels like yellows will look muddy if they don’t receive enough light. As a result you cannot ‘correctly’ light meter the gel.

Take a look at the tests I did with my gels below. You can clearly see that the colors change drastically with variations in exposure.

The above diagram shows you just how varied a gel color can be by simply changing the amount of light that passes through them. When I was doing this test I set up my strobe with a medium power output and simply adjusted the aperture on my camera and took a shot at each aperture increment. The same results would have been obtained had I simply kept my camera set to a specific aperture and turned my strobe power up and down.

So in conclusion there is no ‘correct’ exposure, only the one that produces a color and tone that you’re happy with. I’d personally recommend you doing a similar test with your gels to see just what colors you can produce at varying exposures.

Lighting modifiers obviously play a big factor in how the gels will look on the background. In short though, soft light modifiers like softboxes will produce more of an even tone but will never have deep saturated colors as a result. It’s also a lot harder to get rich brighter hotspots with softboxes over harder lighting modifiers like grids and shoots.

The images above show the difference between modifiers when used in conjunction with gels. The image on the left is a small softbox with a blue gel. The color is less vibrant and lacks in saturation from edge to edge, plus there is little sign of a distinctive hotspot. On the right we have a gel attached to gridded reflector dish. The resulting light is a lot more saturated but has a significant hotspot that drops off dramatically. If you wanted a flat even toned gelled backdrop then the softbox is the way to go.

Taking our modifier choices a step further, we also have variations within the hard light modifiers as well. Some are more open/wider than others and the addition of a gridded modifier is the most directional and hardest modifier of them all. 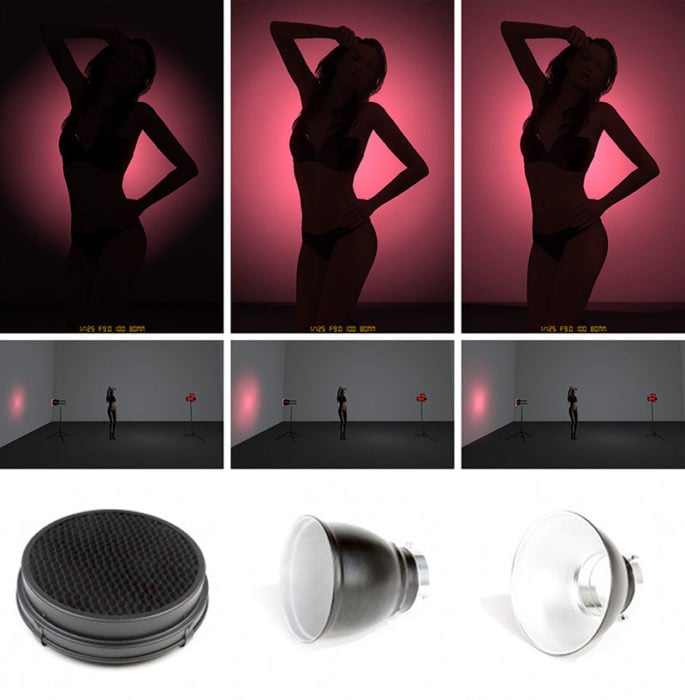 So in the three sets of images above we can clearly see how variations in hard light modifiers affect the gel appearance. On the left we have the tightest spot with the grid on a 60 degree reflector. In the middle we have a bare 60 degree reflector that still has a relatively controlled but tight vignette and then on the right we have the open 65 degree maxilite reflector dish from Bowens, which is my favorite mix of control and spread.

Every modifier will clearly effect the gel spread and even without changing any other factor the modifier plays an important role in determining the look. For myself and what I do, I prefer a harder modifier over the softer ones as it offers more color saturation and control and with the hard light modifiers themselves I prefer the open dish like the Bowens Maxilite 65 degree reflector dish. This modifier offers me the best balance of saturation, control and spread of color.

Gel distance technically refers to the distance of your gelled light and modifier from the backdrop. The closer the light to the backdrop the smaller and tighter the vignette of color is going to be. Also if the exposure isn’t modified the brighter the hotspot at the center will be too. Again this is personal preference and it depends greatly on how far away you’ll be when shooting the model.

For example if you’re quite close to the model and shooting on a 50mm lens the gelled effect on the background will look very different than if you’re a long way away but shooting at 200mm. 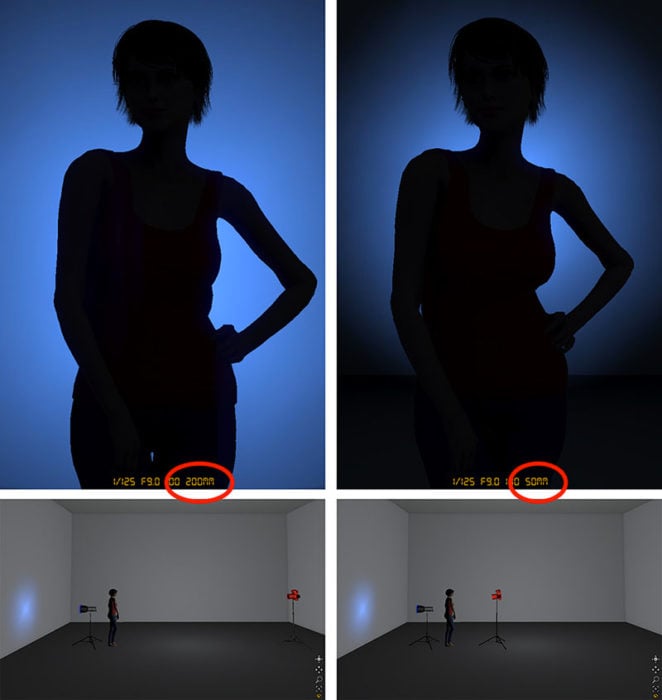 The two images above are drastically different but the only thing that has changed is the length of lens used. The image on the left is a 200mm lens that has compressed the background so you get a more even tone of gel exposure. The right hand image is shot on a 50mm lens and shows a far wider area of the background in shot, which in turn shows the heavy vignetting present at the edges of the gel.

Playing with your preferred lens length and gel placement (distance to background) will be key to getting the right look for you. For example if you want to shoot at 50mm you can still get the 200mm background look, you simply have to move your gel further away from the backdrop to get a wider spread of color.

Once you’re happy with the lens choice you need to fine-tune the look you’re after. Moving the gelled light closer to the backdrop will produce a stronger vignette of color compared to moving it further away, which will produce a smoother tone from center to edge. 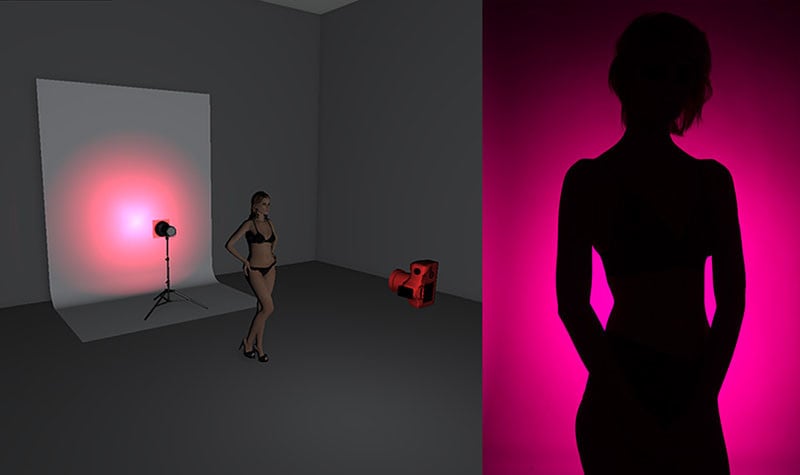 The image above shows what a gelled background looks like when the gelled light is placed quite close to the backdrop. The background has a very heavy vignette and you start to lose color altogether at the top of the frame. By bringing the gelled light further away from the background and hiding it just behind the model you get a far more even color tone from center to edge.

So bringing your gelled light further away creates a more even tone of color across the background, which is what I prefer but moving it closer will provide a similar look if you’re shooting on a longer lens.

That’s it. Keep those three things in mind — exposure, modifier and distance — and adjust each of them to your taste. Lowering the exposure of a gel will often add saturation, using soft light modifiers will reduce saturation, and moving your light further away will even out the tone and reduce vignetting.

Remember: There’s no right or wrong, just personal preference, so play with what suits your style.

P.S. I also teach all these things in person in my Gelled Lighting Workshops in the UK.