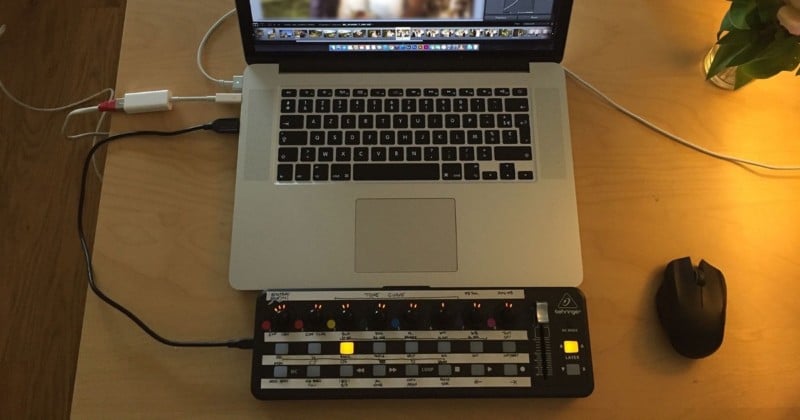 Not so long ago I posted a little rant against Lightroom on Reddit. I use Lightroom on a daily basis. It’s a great piece of software, and it does two things very well: cataloging and RAW processing. My problem is with the interface.

The interface uses little sliders, the most skeuomorphic layout elements I know. They are easy to understand and contribute a lot in making Lightroom a very beginner-friendly software. However, I find using these sliders with a mouse or a trackpad to be awful. Each time I want to modify a setting I don’t have a preset for, the process is the same:

This back and forth movement is at the very heart of my mixed feelings about Lightroom. Why do my eyes have to leave the picture so much? I wanted a solution that would allow me to stay focused on my pictures while offering a more natural way to operate the settings.

So I drew a little schematic of my idea of the best Lightroom device. Image courtesy of me. I’m bad at drawing: 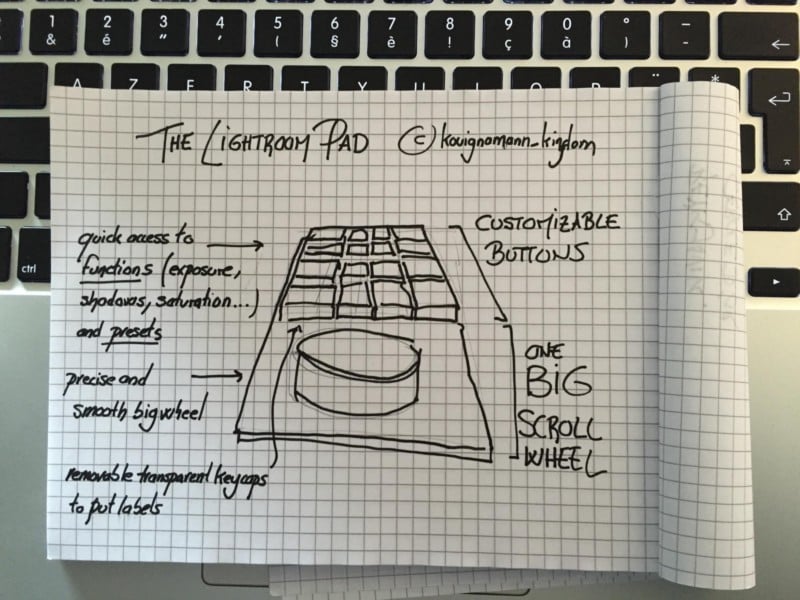 The specifications were the following:

There are already a few similar devices that exist, one of the most famous being Palette. This is definitely a step forward; on the paper though, this is half a solution. I find it very expensive and somehow limited. “$200 USD for 1 slider, 1 knob, and two buttons.” I nope-d the hell out of their online shop…

Blame it on Abobe

In my opinion, this poor user experience is, at least to some extent, Adobe’s fault. Here’s a excerpt from my Reddit post:

On this aspect I find [Lightroom] to be the black sheep in the Creative Suite. What I find it lacking is:

– Powerful shortcuts management, like Photoshop or Premiere Pro.
– Scroll wheel support (depending on the version/OS it may work) like the ability to select a slider by clicking it, or pressing a shortcut and setting it with the scroll wheel.

There is no actual shortcut management panel in Lightroom. While other programs in the Creative Suite have it. This is a shame.

Not so long after my little rant. I came across THIS: PFixer by Pusher Labs.

PFixer is primarily a piece of software that allows the user to customize and manage Lightroom shortcuts. Their claim, that PFixer is “The fastest way to process photos in Adobe® Lightroom®. Period.” is quite interesting. The software runs alongside Lightroom and provides access to about 200 functions.

But the most interesting part is that Pusher Labs also offers devices that work with PFixer.

Two devices actually: The “Panel” and The “Minimal.”

What is very interesting is that these two are based on, respectively, a Behringer BCF-2000 and a X-Touch Mini: Two MIDI controllers build by Behringer, a german-based manufacturer of music studio gear.

I wanted very hard to try this.

So I Tried It

I was interested by the bundle Minimal + PFixer software. The price point is quite aggressive—compared to the competition mentioned above—at $180.

Last minute, I was able to purchase a standard refurbished Behringer X-Touch mini (on which the “Minimal” is based) for about €40. This is a great deal.

Important note: While it is basically the exact same device, the standard X-Touch lacks a few things compared to the one sold by Pusher Labs. Most of the problems I’ve had are because I do not use the device provided by Pusher Labs.

There were two main issues:

Aware of the troubles I might get into trying to make it work, I purchased it anyway.

Nothing special here. The Behringer X-Touch Mini is a nice device.

The size and weight is great and could probably satisfy those who are editing on-the-go with a laptop. It fits in a backpack and I don’t think it requires a special case or something. Just some attention not to break the knobs but the whole thing feels very solid and can probably handle some pain.

The USB cord is a bit too long. I use a short one from a GoPro instead.

This was the complicated part. First of all, you need two pieces of software:

1. The PFixer obviously. There is a nice 14-day trial that I’m currently using.

2. X-Touch Editor. Provided by Behringer, it is required to edit the internal MIDI mapping of the device.

Plot twist: PFixer works only on MacOS while X-Touch Editor is Windows only.

You don’t need to do this if your device has already been prepared by Pusher Labs.

I don’t have a Windows computer but I have a VirtualBox VM running Windows 10 on my Mac. In it I was able to download X-Touch editor, run it in my VM, allowing access to the controller via USB and start fiddling with the settings.

“Fiddling” is the right word at this point. Mostly because of this little tidbit:

We do not provide support for configuring 3rd-party MIDI devices, but you can look over the MIDI Mapping instructions topic that covers how to set up your MIDI controller to send the right type of MIDI commands. 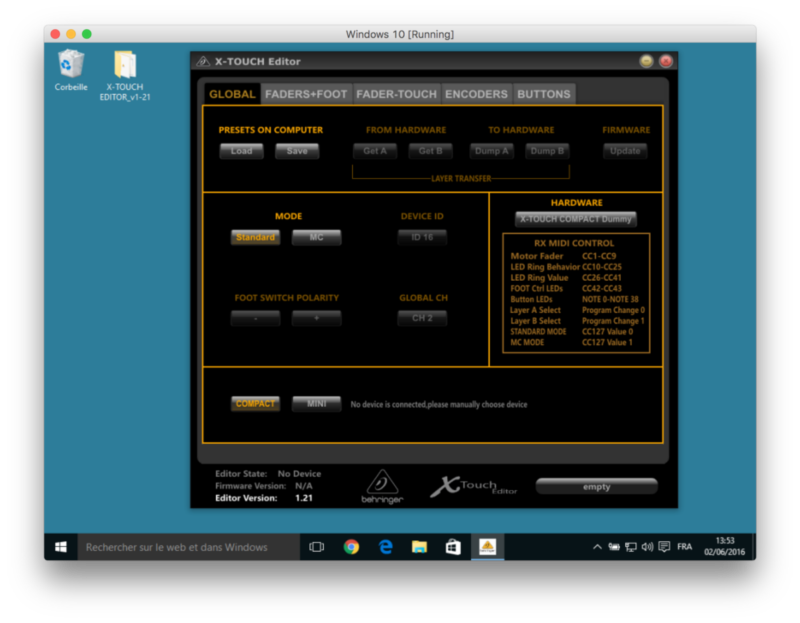 Pusher Labs gives some good insights about how to map the device properly but not in details. In a perfect world they would have provide the .bin preset file that one can import in X-Touch editor and boom mapping would have been super easy.

But they did not. They give some important information though:

Set the global channel to OFF.

The encoders should be set to “absolute” 0–127, LED ring to single.

The buttons should be set to “toggle”.

The channel thing is easy to understand.

The LED ring thing also. But “absolute” doesn’t exist anymore in X-Touch Editor—it as been updated recently. I’ve used a mixture of “Trim” and “Single”. Your mileage may vary.

The thing about Note/CC that “should not overlap” gave me some grey hair.

The way PFixer works is a communication between the device and Lightroom. An action on the device modify a slider in Lightroom and vice-versa. I mapped all the buttons and sliders of my units using CC (not notes) that do not overlap. But I ran into some glitches.

I had set a knob to modify Saturation. It was affected to CC58 (if I remember correctly). The light was flickering on the knob and each time I turned it, instead of starting from the previous value and increasing/decreasing it, it started from some weird small value.

Using a soft called “MIDI Monitor”, I “listened” to the communication between Lightroom (via Pfixer) and the device. The device is updated about three times a second with Lightroom values. I don’t know why but in this update packet, the CC58 (that I’ve had affected to Saturation) received a value of “13”.

After a lot of trial and error, I figured out that it might have been some sort of interference. I set it to another CC value, and it worked. Problem solved. 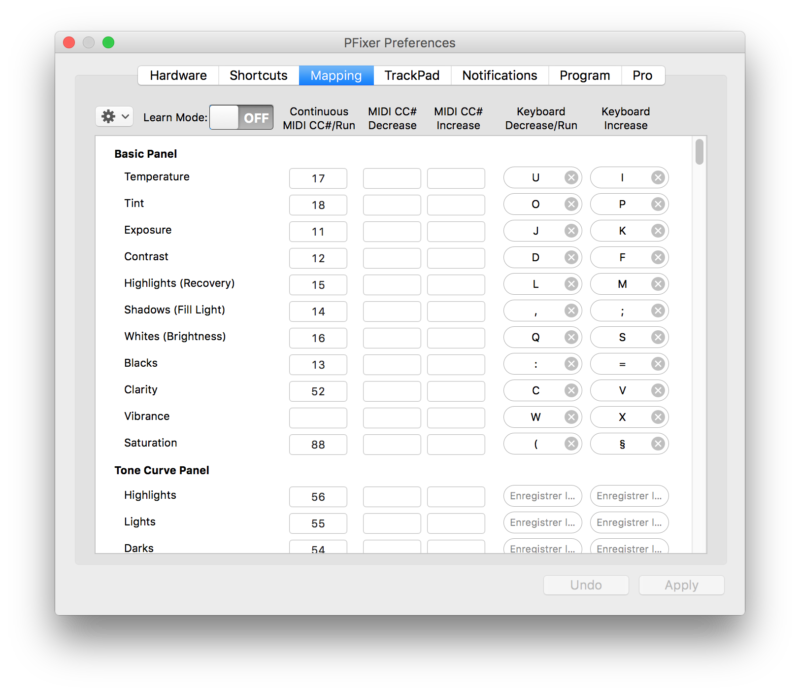 With a correctly mapped MIDI device this part is very easy.

If you purchased the Minimal directly from Pusher Labs, the preference panel comes with the mapping ready to be loaded. Two clicks and you are ready.

Of course, I did not have this luxury. Even if I wanted to use the same mapping, I would have had to do it from scratch because the mapping I’ve done in X-Touch Editor is probably not the same as the one on the Minimal.

Anyway, this would give me a fair bit of practice.

I did a lot if iterations of my perfect mapping. The more I used PFixer, the more it blew my mind. You can have so many functions with very few buttons:

2. In PFixer, you can create 8 modes. Each mode allows you to do a whole different mapping. For, for example, in “Basic” Mode the first knob is Exposure, in Saturation Mode it’s Red Saturation, and so on and so forth.

PFixer provides access to a lot of Lightroom functions but not everything unfortunately. I would not blame Pusher Labs for that, because what they achieved is basically witchcraft. What would have been great is: 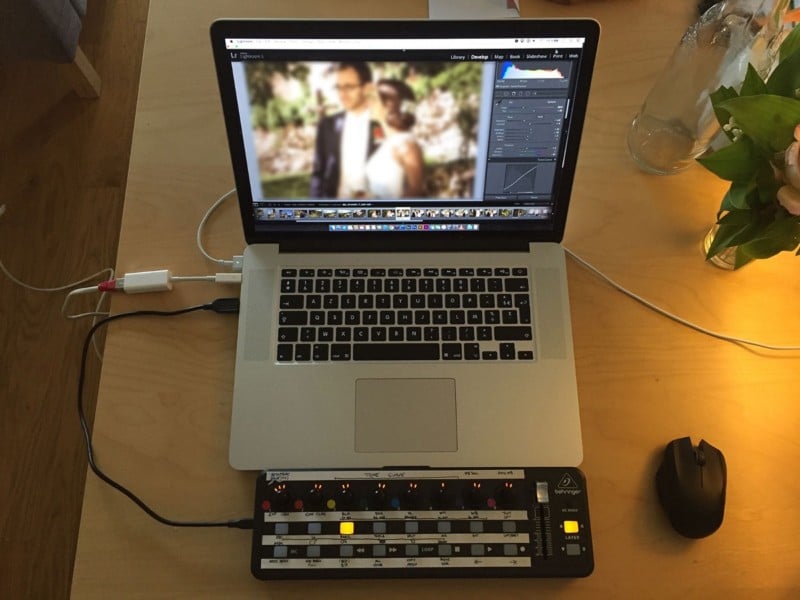 This is a very early review because I’ve been using it for just a few hours, but so far it is great.

I could probably just end my review here, but there are a few more things that bear mentioning:

It requires some thinking in order to achieve a perfect mapping. This mapping would probably differ from one photographer to another. Except for the setting/mapping issues, I’m not disappointed not having the nice slick sticker overlay from PusherLabs. I did use their mapping as a starting point but I changed it rapidly. I think the mapping I’ve created so far is great and works fine for me. For example, I skipped all culling function since I don’t use Lightroom for culling.

I’m not entirely sure it allows for a faster editing. Not in my experience so far. But it allows me to go very very deep in the editing. Before, using my mouse and the on-screen sliders, I was kind of bored having to go to one rarely used slider or another because scrolling and things. Sometimes I tried to get away with using a combination of other sliders I use more. Now, all of the sliders are quickly accessible so I’m able to achieve exactly what I want.

In the end, I think it requires me the same amount of time for each picture but I do more. I get closer to what I exactly want.

I can focus on my picture more. I can hide/show the panels with on buttons and adjust settings while panels are hidden. It’s awesome. My eyes almost never leave the picture. I’ve surprised myself opening a picture, looking at it for 5 seconds and boom, I turned sliders—even two at the same time—clicked buttons super quick, and that was it. My eyes never left the picture.

It’s the same feeling as adjusting your camera while looking in the viewfinder. You have very little info but it’s just muscle memory. You know where the buttons are and how much you have to turn them.

The software feels weird. You feel it’s working very hard in the background and sometimes it kind of loses its grip on Lightroom. But it tells you when it happens. There is a bit of lag, not much but a little bit. Again, I blame this more on Adobe than Pusher Labs.

It also turns your history into a little bit of a mess: 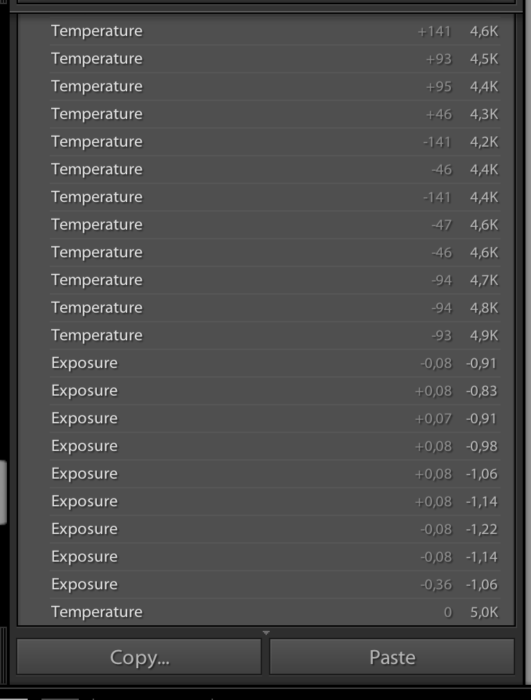 Instead of having one line for each change of a slider, you have a lot more—one per update cycle. I think it’s just linked to how Pusher Labs have found the trick to achieve control on Lightroom—PFixer probably dials the values and doesn’t actually move the sliders.

It does not bother me too much. But my partner might freak out when she edits this catalog on her workstation.

About the author: Jérémie is the more technical half of the Paris-based travel & lifestyle photography studio Jérémie + Emilie. To check out his and Emilie’s work, visit their website or give them a follow on Facebook and Instagram. This post was also published here.

Polaroid Created a Shot Glass Mount for Its Action Camera

Photoshop Trick: Adjusting Perspective in Just a Small Piece of Your Photo