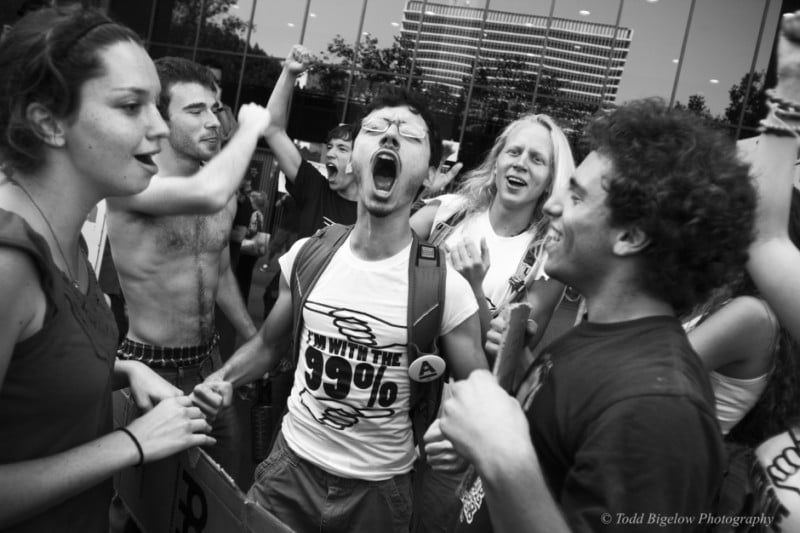 The passing of Prince gave the world pause to consider the nearly peerless artistic success and untimely death of an iconic musician.

He was renowned for his ability to create a distinctive sound and deliver to his worldwide fan base a library of songs that put him among the Lennons, Jacksons, Bowies and Marleys of the music world. Despite his relatively demure physical being, he had the spine of a giant, something that served him well in his battles against corporations intent on owning and profiting from the Minnesota native’s archive. Which is why he’s my hero.

It’s simple to see the parallels between Prince’s work and the work of thousands of freelance photographers in the country. We’re artists, we’re creators, we’re story tellers. But most of all, we’re individuals attempting to express our vision in our own way. In other words, it’s personal. Prince excelled in understanding this throughout his career, a career that began in the era of vinyl and tragically concluded in the era of streaming.

When Prince passed away, he was immortalized not only for his vast artistic accomplishments, but for his willingness to stand and fight for the right to control his personal work in an digital era when corporations are uncompromisingly demanding those rights. Is there anything that photographers can take from Prince’s untimely death? Yes.

Above all, Prince maintained ownership of his work. He wrote the majority of his work by himself and was renowned for his ability to play the dozens of instruments heard in his recordings. Doing so allowed him to maintain complete control of who sold his songs and how those songs could be used.

Photographers can easily do the same. First and foremost by refusing to sign the ubiquitous Work For Hire agreement. Your archive is your livelihood and can serve you well over your lifetime and be passed on to your family for royalty generating income in the future. Don’t believe me? Consider that Prince’s estate is worth around $300 million and is expected to grow in the future.

As the LA Times reported in a front page story on April 25:

Prince’s music is expected to remain the cornerstone of his estate–and one that he defended closely as digital shifts turned the recording industry upside down.

Granted, most of our archives will not reach that valuation, but that’s irrelevant. If you end up creating powerful, meaningful and, dare I say, iconic images during your freelance career, but signed away the rights to a corporation, you will have no opportunity for licensing revenue in the future. The royalties will belong to the corporation, not you or your family (granted you have arranged for such with a proper Will and/or Trust.)

Prince steadfastly protected his work by registering the copyright with the US Copyright Office and going after those who were found to be publishing his music without authorization.

Photographers can and should do the same. I find my work all over the Web and in print as well and make no qualms about pursuing infringers. Unfortunately, most photographers don’t. Traveling to various parts of the country to teach my workshop I’ve found that the vast majority of photographers fall into three simple categories when it comes to copyright:

How important was copyright to Prince? Again, the LA Times front page story:

As Prince’s kingly worth shows, those who own their copyrighted work can build sizable levels of wealth.

Prince and other musicians such as pop music’s (dare I say pop culture’s) king Michael Jackson clearly grasped the importance of licensing their work. That understanding led Prince to be the frontman in the fight against corporate takeover mentality that has grown into a firestorm in the digital age.

As new platforms evolved the antiquated distribution model of the music industry, corporations jumped at the opportunity to seize more licensing rights by offering one-sided contracts that strip artists of much needed licensing revenue. Pandora and Spotify’s meteoric rise in the streaming platform reportedly decimated royalties for musicians who agreed to allow their work on the platforms.

Prince pulled his work from Spotify, foregoing the largest streaming service in the world for the much smaller but artist-friendly Tidal. In other words, Prince didn’t want his personal work valued for pennies on the dollar and said no to the volume based streaming service. That’s right, he said “no” to the largest distribution platform for musicians. He said “no” to corporate control of his work.

In light of that, I ask photographers now: does this fight sound similar? Does it not mirror the situation photographers face on a near daily basis? It takes nerve, the willingness to be labeled a “problem” by corporations and a strong spine to say “no” to bad deals, yet these traits are increasingly hard to find in freelance photographers. Prince had them all.

Photographers can follow Prince’s, Michael Jackson’s or even Bob Marley’s lead in maintaining control of their work if they so choose. It makes no difference that musicians create audio works of art and photographers create visual works of art. It’s all intellectual property in the eyes of the law.

Photographers can otherwise choose to allow any one of the many mega-agencies (Getty, Alamy, Shutterstock, etc) or media conglomerates of the world (TIME, Hearst, Conde Nast, Gannett, etc) to control their work for them. The choice is an individual one, but one that carries repercussions throughout the profession.

When photographers, especially “top tier” photographers, agree to allow corporations to dictate to them the value of their work, they contribute to the demise of the artists who stand for control of their own work. That’s especially disconcerting because highly respected photographers can help drive serious dialogue on the issue of corporate rights grabs.

What Prince understood that so many freelance photographers fail to grasp is that maintaining licensing control is not just about generating money from licensing fees. It’s just as much about principle and respect. The principle that every artist has the right to decide how and where their work is published. The principle that you have a right to feel outraged when a corporation demands your licensing revenue while simultaneously reimbursing the CEO for use of his private jet. Standing on principle, though, can often mean standing alone. Prince was okay with that. He had a strong spine. I just wish more photographers were like Prince.

About the author Todd Bigelow is a LA-based editorial, non-profit, and corporate multimedia photographer handling assignment work for some of the world’s leading publications. You can find more of his work on his website, or by following him on Twitter and Facebook. This article was originally published here.

To the Arctic and Back with the Leica M, a Camera Review