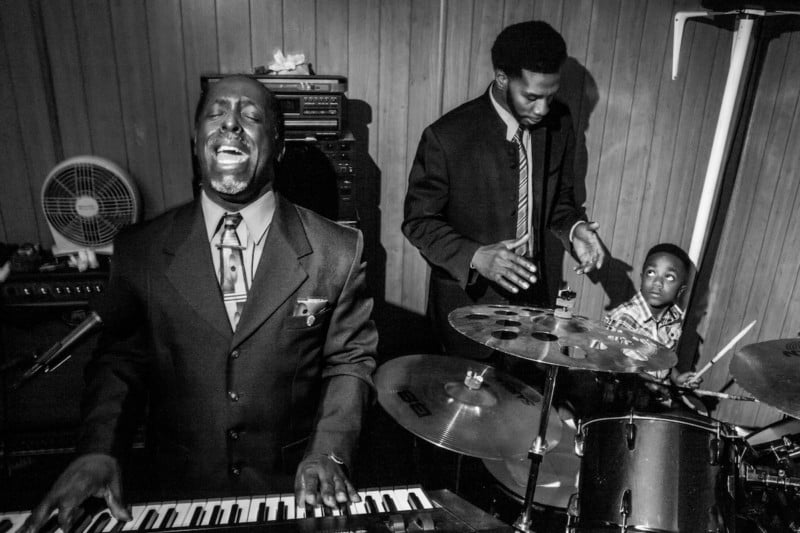 Behind the lens, I am no longer Ben Helton, married father-of-2 living in the South. Camera in hand, I become invisible and free: a blank canvas in attendance to take in and document the experience around me as it unfolds.

Previous exposure to the subject isn’t always necessary, because my focus is capturing the energy, emotions, and visually unique scenes of the people and environment that surround me. I don’t have to be the expert on the subject I’m capturing as long as the end result is that the viewer feels as if they were there experiencing it with me.

That’s not to say I don’t do my own due diligence researching my subjects so I can avoid any potential faux pas and respect cultural differences—respect for the subjects I’m capturing is always paramount. My point is that I use the camera as an all-access pass to be a part of something I otherwise wouldn’t have participated in: the back kitchen of a small restaurant in a quiet Istanbul neighborhood, high school graduation parties at the fanciest hotel in Serbia, and behind the scenes at wrestling events, rodeos, concerts. All it takes for me is a camera and enough guts to just start shooting or simply asking to join in!

Allow your camera to be the tool that gives you the courage to involve yourself in something outside the ordinary. Recognize that you can overcome any insecurities that may inhibit you by hiding behind your camera as simply “a photographer.”

More often than not, most people are flattered when you ask to take their photo. It makes them feel special, included, worthy. Connections and networking are great and can open a lot of doors, but never underestimate the power of showing up and simply asking for what you want. Nearly every “outside of the box” scenario that I have shot has been a matter of seeing a unique situation, or something new to me, and walking up to ask if I could take some pictures. No Excuses: You can hide behind your camera

The list can go on forever but the common denominator is always the same: many photographers assume they can’t.

I challenge you to know that you CAN. You just have to put yourself out there. Ask someone in charge if you can photograph their event, ask another photographer if you can second shoot a wedding to gain experience, hit the streets in your small town and take candids—shoot away and just ask when necessary!

As it turns out, some of my most important work to-date was just a mile from my house. It’s a story about a small, storefront church hidden in plain sight on Main Street. One Sunday afternoon, while walking by on the sidewalk, I heard their worship through the walls and, despite not knowing anyone who was a member or anything about the religion they practiced (or even what religion they practiced), I knew I wanted to experience more.

How did I make this project happen? In the face of a slew of potential excuses, all I had to do was ask. I hope my story encourages you to go forth fearlessly searching for something new. This is what has worked for me time and time again and hopefully my experiences may help motivate and inspire you to go out and do the same. 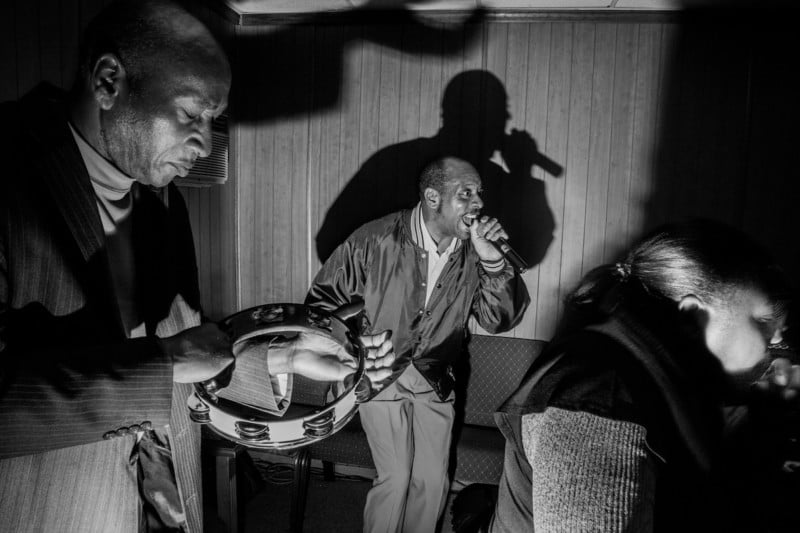 This is my story, one of many, about Messiah.

In a small Southern town of only a few thousand sits Messiah Miracle Worship Center: An African American storefront church in the middle of Main Street. The town is Senoia, Georgia, which has been the set for the popular television show “The Walking Dead” as well as the backdrop for movies such as “Fried Green Tomatoes” and “Driving Miss Daisy.” Thousands of tourists flock to Main Street weekly with hopes of catching a glimpse of their favorite star and for the chance to soak in the Southern charm and small town quaintness.

Most passing by fail to notice the dark green door with blinds pulled tight and the inconspicuous sign indicating that a church exists.

The entrance door is neatly tucked between a gift shop and the aptly named “Waking Dead Café.” I’d seen the church before and always wondered what it was like inside the small building. I’d even been able to hear the music penetrating through the walls and out onto the sidewalk on Sunday afternoons. I was intrigued and wanted to find out what it was like on the inside. I didn’t know what I was looking for, but hoped I might find it inside.

I searched online but couldn’t find any presence and didn’t have the guts to knock on the door or just pick up the phone. I knew better, I really did… but I still allowed my perception of reality and my lack of confidence to be a personal road block. Shame on me, right?

As the months passed, I began to feel stagnant with my photography and decided it was time to find a new photo project. The church had been in the back of my mind for a while now. I didn’t know what I was searching for in the form of a project, but I hoped that I might find it there. I looked online again and, this time, found that the church had a Facebook page I previously overlooked. I sent a message explaining that I was a local photographer interested in coming in and taking some pictures.

I didn’t hear back. Instead of taking a non-response as a no, I looked up the Pastor of the church and messaged him on his personal page. He quickly responded: zero questions asked, I was invited to visit! 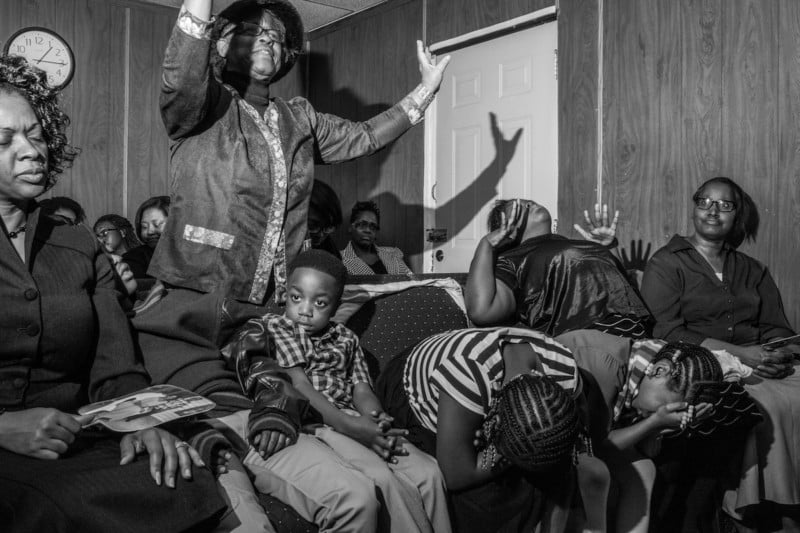 Showing up can sometimes be the biggest hurdle.

I packed lightly for my first visit: A Canon 5d with a cheap, old, manual focus 28mm lens, an X100, and a couple of flashes. I didn’t know what I was getting myself into and how I would approach the project. Would it even be a project? Would they let me shoot with flash? Would they let me shoot at all? My biggest worry was that I would make someone uncomfortable or offend them.

I was a complete outsider: A thirty-year-old guy with a camera who was uninterested in religion and just wanted to document the congregation while they worshiped.

That first night I arrived early. Only the Pastor and a handful of people were there so I started peeking around and analyzing the room to figure out how I would approach shooting that evening. Fluorescent overhead lighting, no windows, and dark wood paneling—every photographer’s dream right?

Two curious girls sat in the front row and cautiously eyed my every move. I sat down nearby and told them why I was there. They didn’t really get it and looked at me like I was crazy, but I cracked some stupid jokes, talked about Hello Kitty, and let them each take some pictures with my cameras. Before I knew it, the sanctuary began filling up with more members and the service began.

That first service I shot nearly 400 pictures. The energy in the room was remarkably dynamic, and the subject matter so compelling that I just kept firing away, afraid it was going to be my one and only visit. The term “spray and pray” has never been more fitting! I must not have stepped on any toes or crossed any boundaries because by the end of that first service I was invited back the following Sunday. Put yourself out there, be a good person and have an experience.

Messiah is a place where everyone is welcomed as family. They’re not there to pass judgment—that’s not their role. It took some time, but after showing up fairly regularly for a few months, I began to start feeling accepted.

I’m not completely oblivious so I realize that more than a couple of members likely may not have enjoyed my presence, and I completely understand that. Sometimes I would skip a week or two in order to give them some personal space, which I hope they appreciated. Occasionally, I would bring them some prints and often I would help them move the chairs and tables in the sanctuary during services. Once, I brought them a small set of rechargeable batteries for their microphones. All really small gestures, but it was with the utmost importance that I showed respect to each and every person since they’re letting me come into their home.

This place of worship with a tight knit congregation was foreign to me, the antithesis of my religious upbringing in which I sporadically attended a large, predominately white, impersonal Methodist church. The acceptance and connection I felt from those happy to have me there was a feeling that was so special. I was often in very close proximity while shooting and it felt at times as if I were also a participant within the moment that I was there to document. As a photographer I’ve never felt more connected to my subjects than I did here. It helped to fuel a passion in me to produce the best possible images I could. I realized this is exactly why I take pictures!

I was invited and encouraged to participate, sing, laugh, cry, and was allowed to take pictures—pictures of some of the most intimate, exposed moments of someone’s life. Just think about the courage and faith it takes to allow yourself to be so exposed. I captured images of people dancing, screaming, crying, praising the Lord, and sweating—all right in front of me! No holds barred, they were there to connect, refresh, repent, worship, and love one another. The results may surprise you.

Since shooting this project I’ve grown by leaps and bounds as an artist, all because I wasn’t afraid to ask and didn’t impose any limitations on myself. Some visits I would shoot a couple hundred frames and wouldn’t go home with a single keeper. Other times I’d leave with six or seven that I loved out of only 40 or so I had shot that visit.

I want my story to motivate you to ignore that little voice in your head saying you can’t. Remove the hurdles and don’t be afraid to work outside your comfort zone. Let instincts, a camera, and a relentless, inquisitive mind be your guide and I promise you’ll be surprised where it can lead you.

I am forever grateful to the amazing family at Messiah who so graciously allowed their vulnerabilities, happiness, sadness, praise, love, and astonishing beauty to be photographed for the world to see. 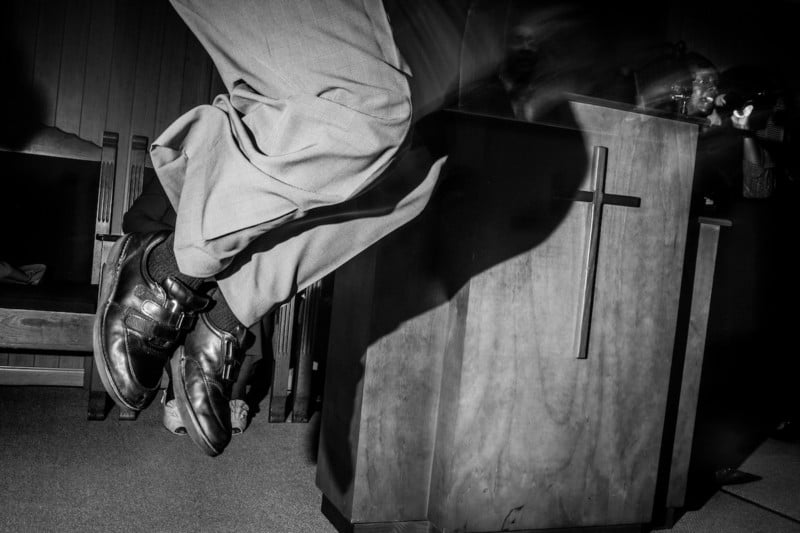 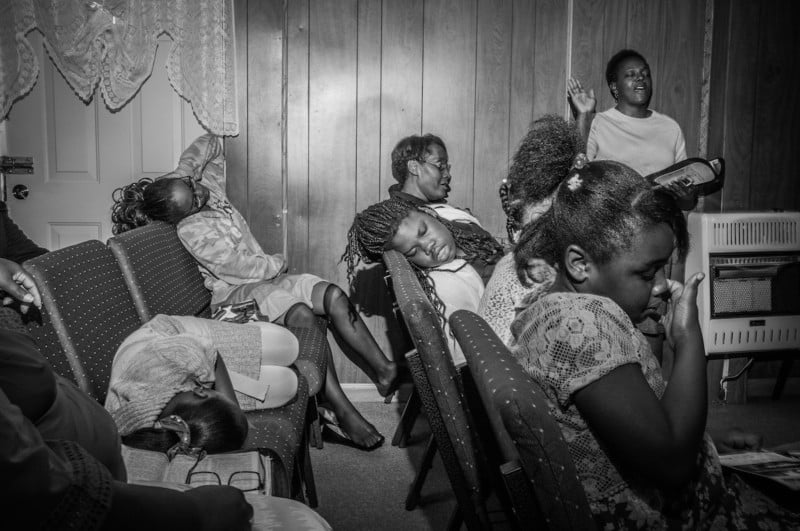 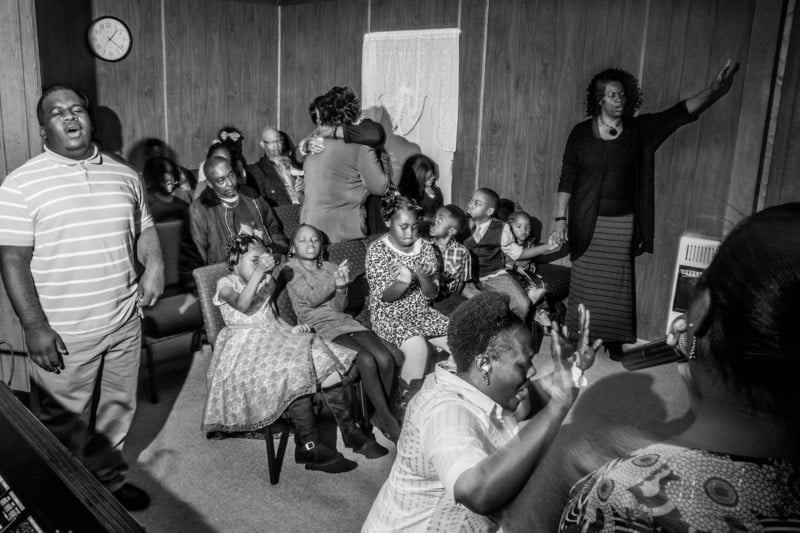 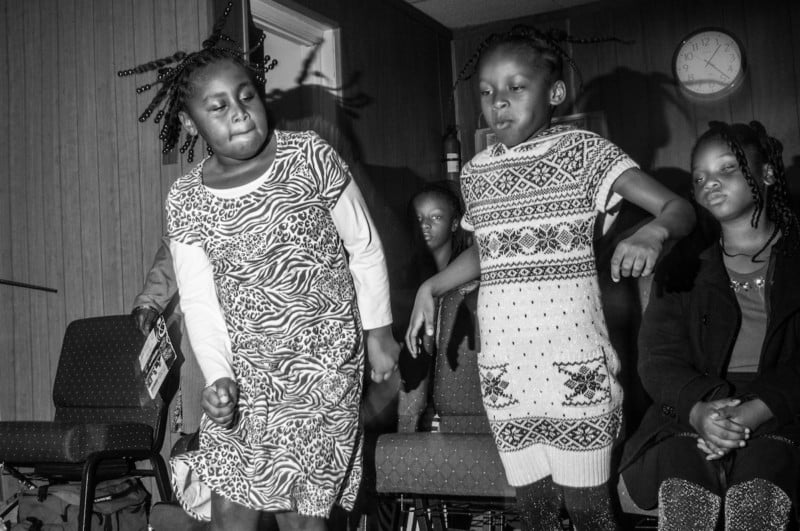 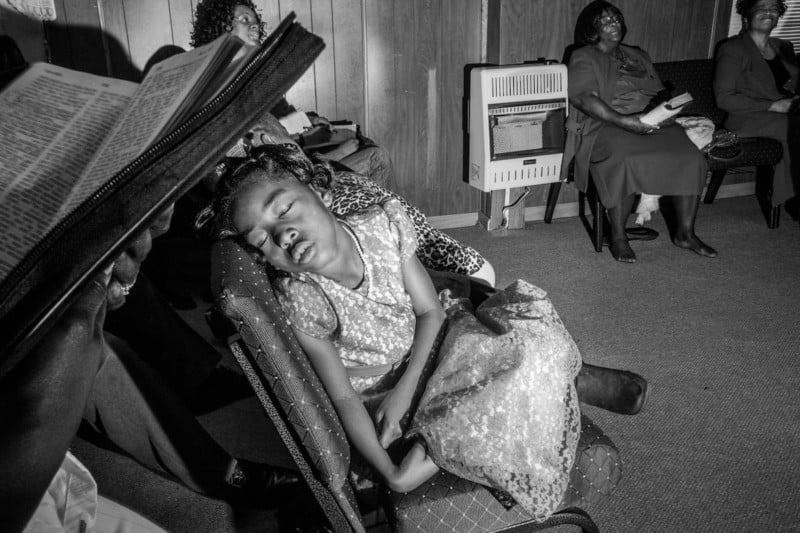 About the author: Ben Helton is a recovering wedding photographer from Senoia, GA where he and his wife are raising two small children. His ongoing focus with photography is centered around religion, politics, and anything strange in the South.

His “Messiah” project was recently featured in The Atlantic, and you can see more of his work at www.BenHelton.com or by following him on Facebook.