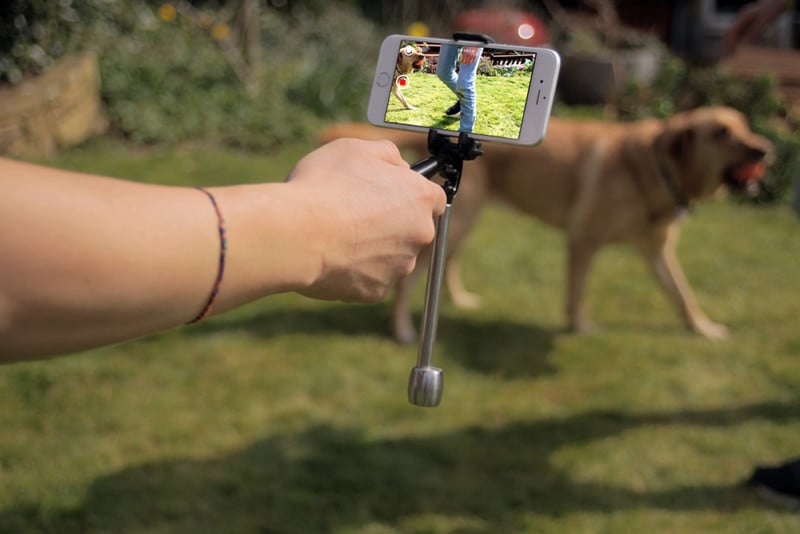 Wish you could capture smooth, shake-free video or photographs on the move with your smartphone? Wish no more. The new “Smoovie” is an affordable, effective stabilizer for your smartphone or GoPro that literally fits in your pocket.

The gadget just went up on Kickstarter today, and it looks sort of like a selfie stick with an extra handle hanging off. What it actually is is a lighter, more compact, and more affordable stabilizer than you’ve probably seen before.

We’ll let the Kickstarter video take it from here:

The magic is in the tiny, powerful magnets found at the hinge of the Smoovie. Between them and the counterweight—which comes with pre-measured markings for the most popular phones/action cams you might use with the Smoovie—the footage you capture should be comparable to what heavier, bulkier stabilizers could manage.

And when you compare the smoovie footage to handheld shots, the difference is stark:

Which brings us to the part you’ve probably been wondering about: when we say “cheap,” what do we mean? Well, the most you could spend on a Smoovie on Kickstarter is about $23 USD. Early bird deals start as cheap as $16 USD though, so you’ll want to hop over there ASAP if you want to take advantage.

So far, in less than a day, Smoovie has already raised nearly $2,000 of the $14,128 they need to go into production, so it’s looking good that this one will actually come to market.