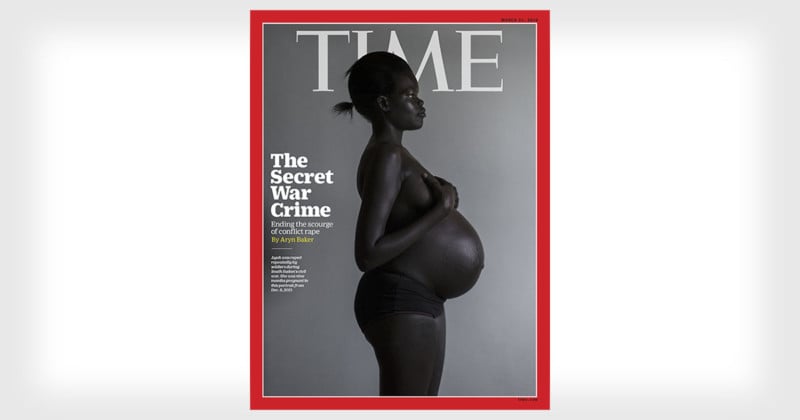 TIME’s latest international issue features a portrait of a rape victim of the civil war in South Sudan. The magazine’s choice of photo is sparking an outcry online, with people calling the cover “exploitative.”

Photographed by renowned war photographer Lynsey Addario, who was herself a victim of wartime sexual assault after being captured by the Libyan Army in 2011, the portrait shows a Sudanese woman named Ayak who was repeatedly raped by soldiers during her country’s conflict. She was 9-months pregnant when she was photographed by Addario.

The cover photo is for a story titled: “The Secret War Crime: Ending the source of conflict rape.”

After it was shared with the world a week ago, the cover immediately received backlash over the way Ayak was portrayed. Here’s a sampling of some of the most popular critical Tweets:

Hi, @TIME. I have so many questions about this wildly exploitative cover. pic.twitter.com/2Ysjj4nu9C

[CN: rape, sexual violence]
So if Ayak is a rape survivor and vulnerable, why is she nearly naked on the cover of your magazine? @TIME

[CN: genocide]
Would you have put a naked Bosnian woman on your cover to discuss systematic rape during the genocide or is that distasteful?

That makes 2 of us @TIME. A rape survivor made vulnerable on the cover of an int'l magazine is wrong in so many ways https://t.co/0Yh2q1m0gI

Others, including Nat Geo’s Deputy Director of Photography Patrick Witty, came to TIME and Addario’s defense:

@patrickwitty Agreed. Very powerful cover photo. And a very horrible reality for far too many women and girls.

In a separate article on TIME, Addario shared the story of how the photo came about, saying that war rape is “always an extremely difficult and sensitive story to cover.”

“Once I went over the guidelines with Ayak – in terms of how she felt about being photographed, given that her image would be seen by thousands around the world – I spent several hours with her,” Addario says. “We sat down with Ayak, and discussed my vision for her portrait, and she didn’t hesitate at all; she understood what I was trying to convey, and as I photographed, I showed her the images on my camera to ensure she understood what I was capturing.”

“It seemed that the very act of photographing Ayak and her unborn child gave her the opportunity to celebrate the very thing her perpetrators had tried to rob from her – her beauty and her dignity.”

How to Use Victorian Composition Ideas in Your Photography