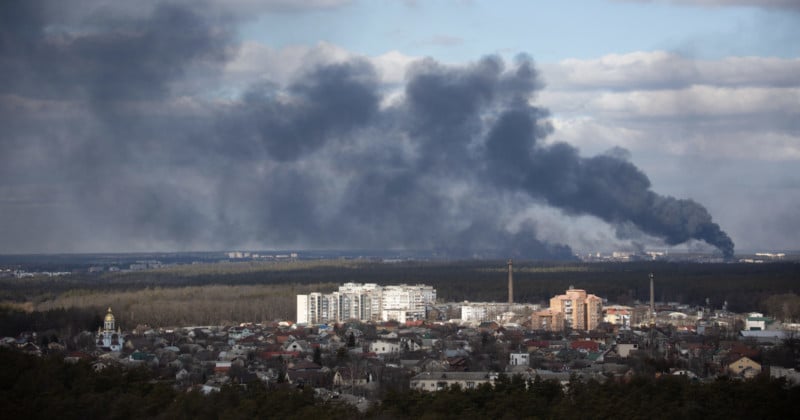 Award-winning American photojournalist Lynsey Addario has been on assignment in Ukraine for the New York Times documenting the war as it unfolds, from the tragic loss of human life and homes to the poignant bravery of Ukrainians.

At the start of the year, PetaPixel included Addario as one of the ten female photographers that everyone should know in 2022 in the photojournalism category. Unsurprisingly, Addario has traveled to the very epicenter of the war in Ukraine following Russia’s invasion and has been capturing the disastrous consequences inflicted upon the country and its citizens.

Speaking from a bunker in Kyiv, the capital of Ukraine, Addario tells CNN that she has seen “an incredible operation” take place as ordinary citizens — teachers, accountants, and even a coffee roaster, and many others — have joined in the war and humanitarian efforts to protect their country.

“I’m seeing … teachers … a coffee roaster … an accountant. [A woman’s] fiancé decided to join [the fight] … he said ‘I don’t have time to get married, we’re at war,’ so she decided to join [too] … it’s incredible.”

Addario has experienced rigorous credential checks to ensure the safe travel of citizens within the city as she and others use these security measures to stock up on food and supplies. She reports that the mood become tenser in the last five days, with people becoming more “jittery.” She has also witnessed more checkpoints going up around the city.

“You have to be very careful because people are nervous,” says Addario.

Using her 20-year experience of covering war zones, Addario notes that it’s difficult to predict what is going to happen and believes everyone is expecting the worst. But, even so, she thinks that citizens are ready for anything that comes their way.

“It’s really a city under siege,” Addario tells CNN. “It’s a city preparing for whatever happens next.”

During her assignment, Addario has captured scenes of civilians fleeing from the war and the devastation left behind for those who stayed — destroyed homes and infrastructure, citizens taking up arms, and people sheltering with any and all possessions they took with them.

Just at the start of Russia’s invasion of Ukraine last week, Addario was named the 79th Photographer of the Year, International by the Pictures of the Year competition. The organization has been honoring photojournalistic excellence since 1944.

A post shared by Pictures of the Year (@poyipics)

More of Addario’s work can be found on her website, Instagram, and Twitter. For more images from inside Russia’s invasion of Ukraine, make sure to read PetaPixel’s additional coverage.