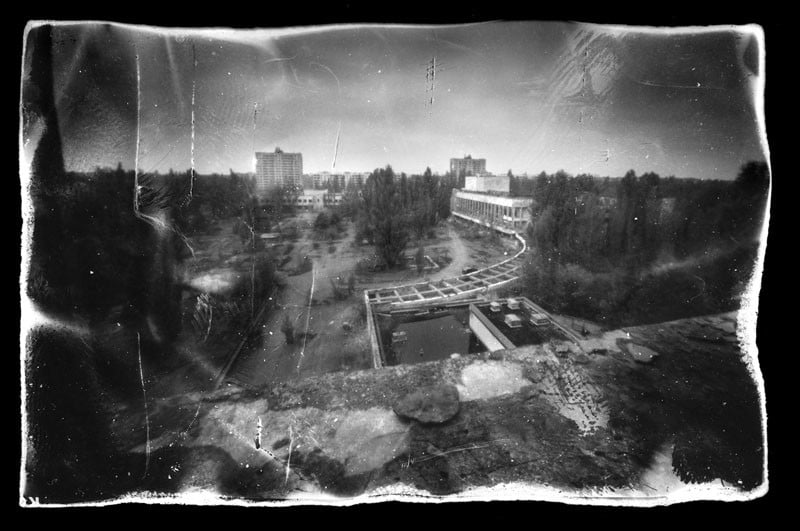 My name is Grzegorz Sawa-Boryslawski, and I’m a Polish photographer whose work since 2005 has been focus on pinhole and zone plate photography. In 2014 and 2015, I shot the world’s first pinhole photos inside the Chernobyl Exclusion Zone.

April 26th this year will mark the 30th anniversary of the Chernobyl disaster, the biggest nuclear catastrophe in history. Over 350,000 in a 35 kilometer (~22 mile) area were evacuated after Reactor 4 at the Chernobyl Nuclear Power Plant exploded.

After the accident, cities and villages were abandoned and the area remains closed to this day. Army guards are stationed on every road into “The Zone.”

My equipment consisted of three cameras with pinhole “lenses” drilled into a regular Red Bull can. Two were 6x9cm medium format, and one was a 4×5-inch large format camera built for Polaroid instant film. I used Polaroid 54 film that expired over 10 years ago, and for the 6×9 photos I shot Kodak T-MAX 400 and developed it in D-76. The Kodak negatives were later distressed by being exposed to very high temperatures. 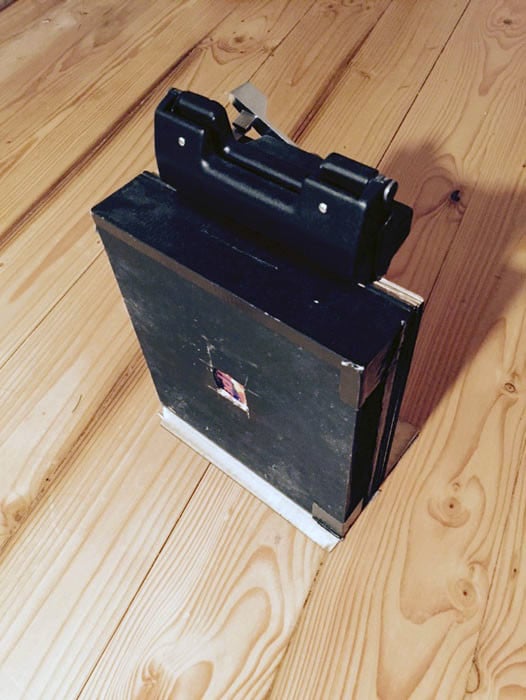 During my two 3-day trips to the Chernobyl Exclusion Zone, we visited both the main city of Pripyat and the nearby abandoned villages. Among the interesting places I visited was the “Red Forst,” a highly radioactive forest that used to glow red at night because of the radioactive dust that fell on it after the explosion.

I also visited Reactor 4, which is still highly radioactive even 30 years later. Here are some of the pinhole photos I made:

My project “Ghosts of Chernobyl,” contains 20 photos printed in my modified cyanotype process. It’ll be traveling around the world for exhibitions in 2016 and 2017, starting with a show on April 8th, 2016, in Wroclaw, Poland. Then I’m headed to Barcelona, Spain for the Revela-T photo festival, and more exhibitions will follow.

Editor’s note: Readers are pointing out that Sawa-Borysławski may not have been the first to do this type of work. We asked the photographer about this, and here’s his response:

I searched the Web year by year and have never seen any examples. It seems that no work has been published to this day, on any website or Facebook/Instagram/Flickr, etc. One artist did radiological experiments with X-Ray negatives, “catching” radioactivity, but they are photograms, not photographs, and they show nothing at all (I believe it was mostly hype because now the radiation is too low to detect it even on X-Ray film). I’ve been digging for prior work since 2010 and have not found any pinhole work from the Exclusion Zone.

Also, I’m happy just making these photos. Being “the first one” wasn’t my main goal.

How to Use Victorian Composition Ideas in Your Photography