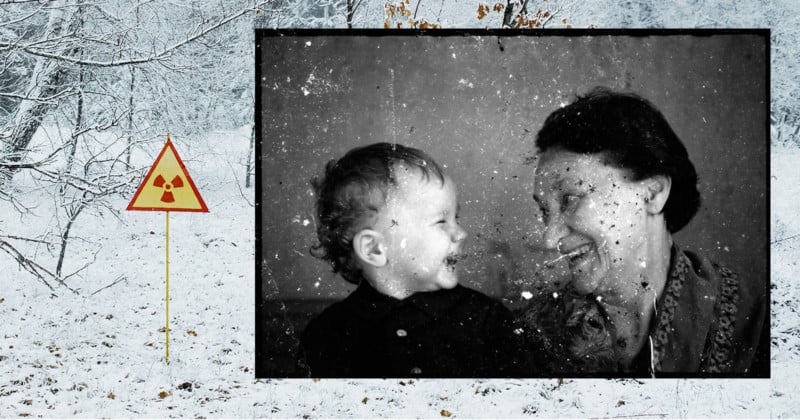 Ukrainian photographer Maxim Dondyuk has been collecting and archiving photos and negatives that he has found in the Chernobyl exclusion area for the last six years. He has rescued around 15,000 artifacts, which include films, photos, postcards, and letters, but with the Russian invasion of Ukraine, he has been forced to put his Untitled Project from Chernobyl on hold.


“My first acquaintance with the restricted areas was in 2008,” Dondyuk tells PetaPixel. “I worked back then as a photojournalist. The place [Pripyat, the Ukrainian city ravaged by Chernobyl’s nuclear disaster of 1986] fascinated me when I saw the houses left in a hurry and nature that gradually replaced the traces of humans.

“But my real understanding of the Chernobyl exclusion zone started in 2016 when I came there again after I witnessed and photographed revolution and war in Ukraine. From that very moment, I began to see and feel everything differently there.

“I was no longer looking for a reportage shooting. I was interested in contemplation and visual exploration of the area I photographed. I was interested in unique buildings, various rural houses with unique architecture, and traces of military installations in this zone.

“I began to be fascinated more about landscapes, which I think can tell much more about what happened than the facts and events themselves. The ruins left by war, in my opinion, show a lot more horrors about the war than the bloody events that I shot in 2014, being with [the] Ukrainian army at the frontline.” 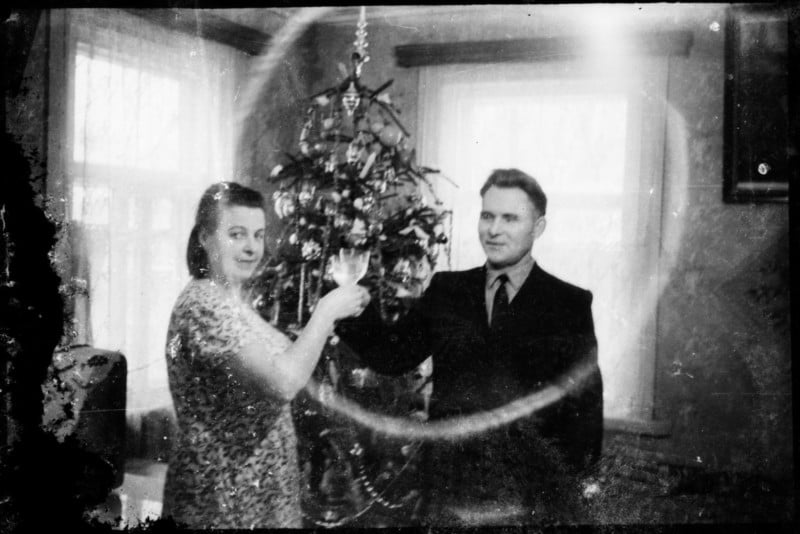 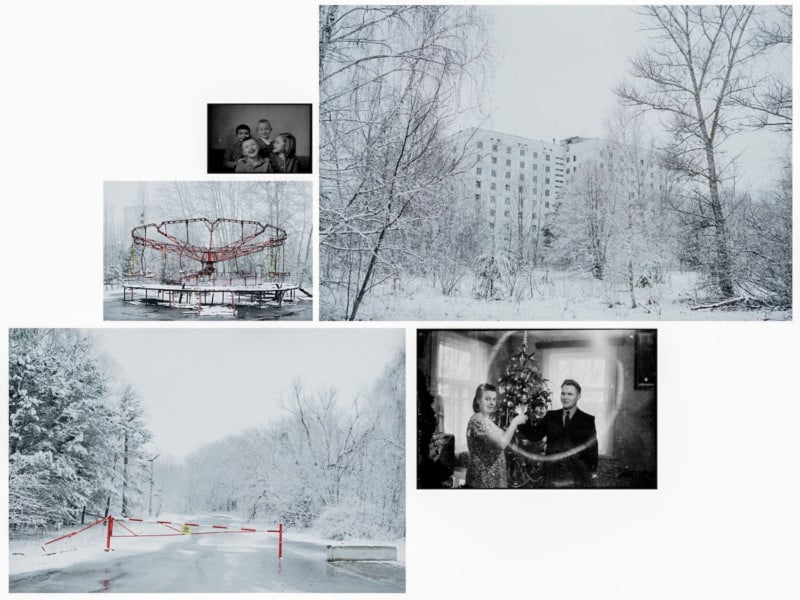 Frozen in Time After a Nuclear Disaster

Chernobyl’s blast was the worst nuclear disaster in history, both in cost and casualties. Dondyuk tells us that in the Chernobyl zone, all nearly destroyed houses and monuments have preserved the memory of the former era.

“This is what attracts me,” explains the Ukrainian photographer. “It takes me back about 30 years. After all, time stopped here in 1986, in the era of the Soviet Union. Letters, furniture, architecture, all this was frozen in time. And this is fascinating.

“I am fiercely opposed to the Soviet Government and what the Soviet Union did. But at the same time, as a man of art, visual, architectural, historical monuments and objects are dear to me.” 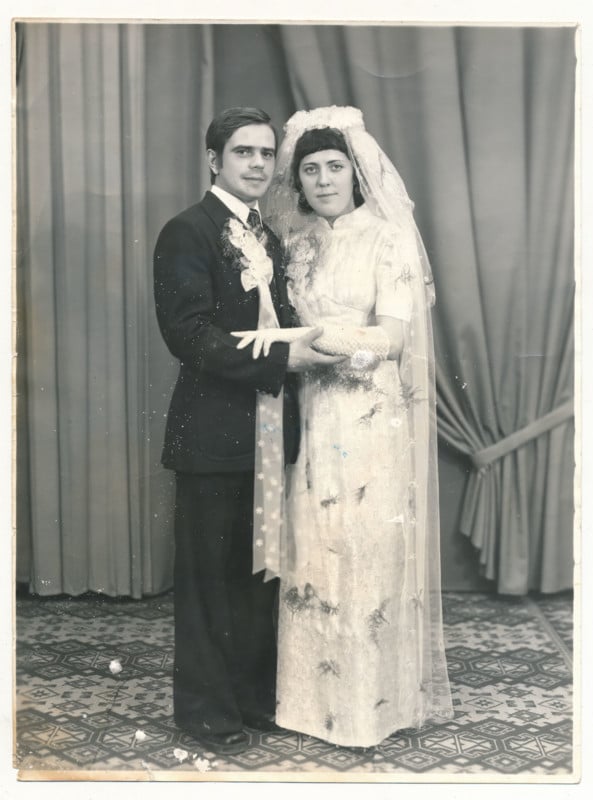 Every recovered image reminded Dondyuk of the country where he was born. He found letters and photos of people who lived in these areas from time to time. These prompted him to learn as much as possible about what was in the Chernobyl area before the explosion, and to save these visual and historical objects, even if nobody bothered to do it for more than 30 years.

In the beginning, the documentarian thought there would be several photos and maybe some postcards. But the huge archive that he began to uncover totally surprised him. 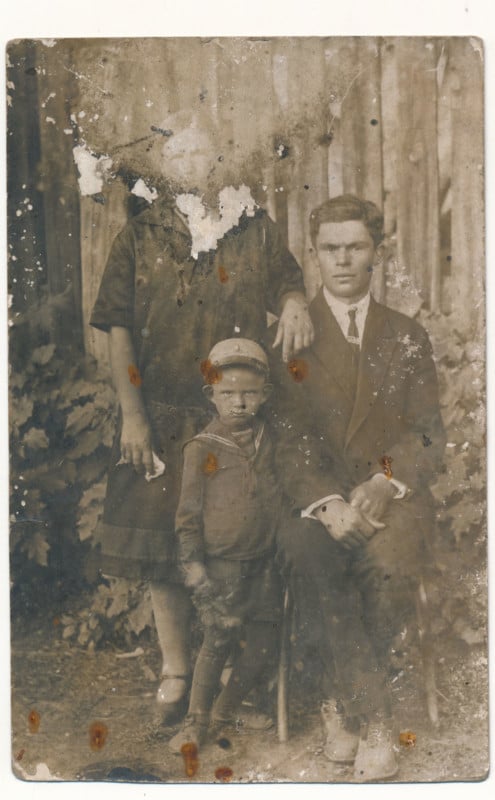 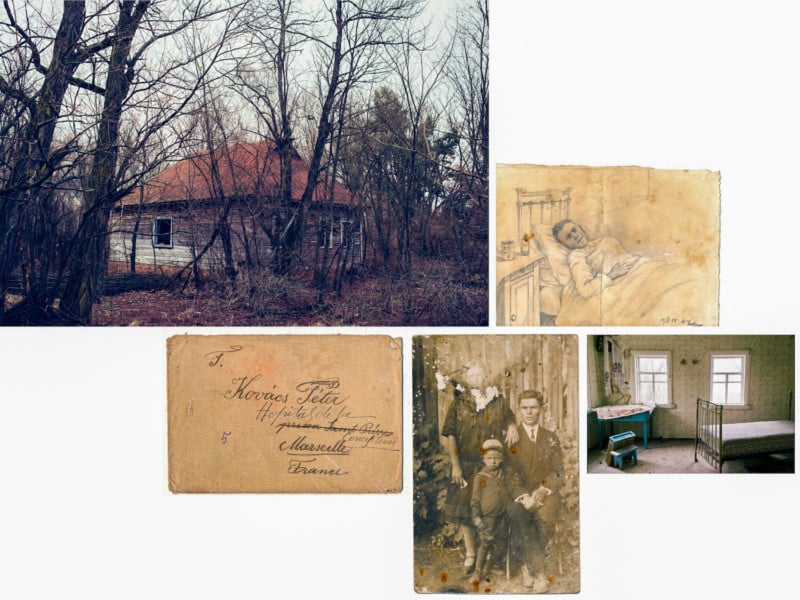 The Soviet government evacuated over 100,000 residents very quickly, promising them that they would return in a few days, and did not permit them even to take along priceless heirlooms or photos of family and friends. The official broadcast told them to take only “highly necessary things …during this temporary evacuation”.

“Imagine that all photos of your family, your grandparents disappeared forever, and you do not have these memories anymore,” questions Dondyuk. “This [is] what happened to those people. They didn’t realize during the moment of evacuation that [they] would never be back to their homes where they were born, or where they lived their whole life.” 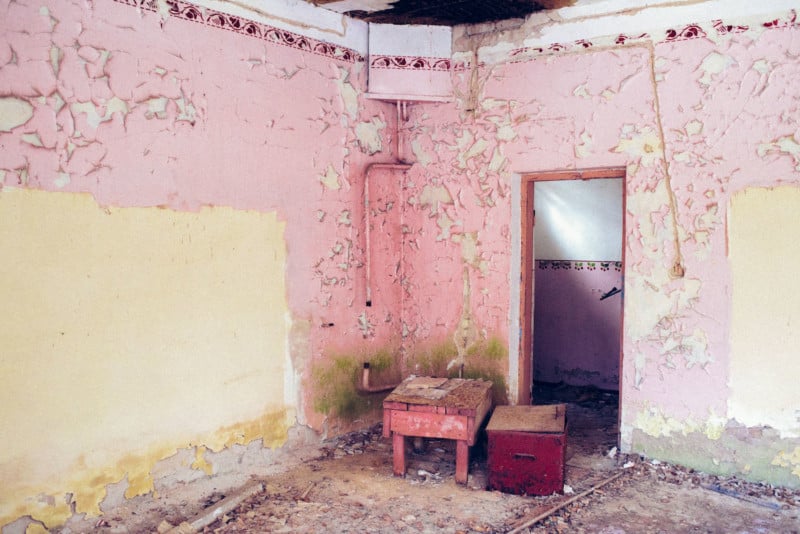 From 2016 Until the Russian Invasion

Dondyuk started working on this project in 2016 and made several trips to the Chernobyl zone in the next two years. The longest and most important expedition took place last summer, in 2021. Accompanied by his wife Irina, he lived for three months (video below) in the Chernobyl zone, and the couple explored villages daily on foot, covering a few hundred miles.

Each village had at least one photographer who recorded events and important happenings, says Donkyuk. When he discovers that house, he is the most satisfied as he comes up with a treasure trove of images that record birthday parties, dancing in the woods, and weddings in that community. 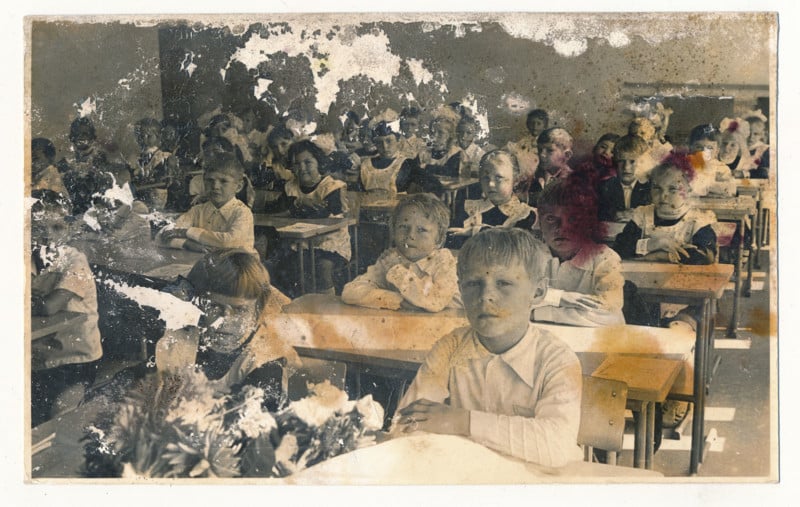 The passionate documentarian does not look for the most memorable, most important, or most interesting photo as all photos are “memorable” to him and worthy of safekeeping.

“I never thought of it as something interesting or important,” says wife and studio manager Irina. “But last summer, after we spent so much time in the zone, everything has changed for me. I fell in love with the place, I understood and felt the area, and the area opened up to me too. It is incomparable to when you come there as a tourist and spend like a day or two–that is nothing.” 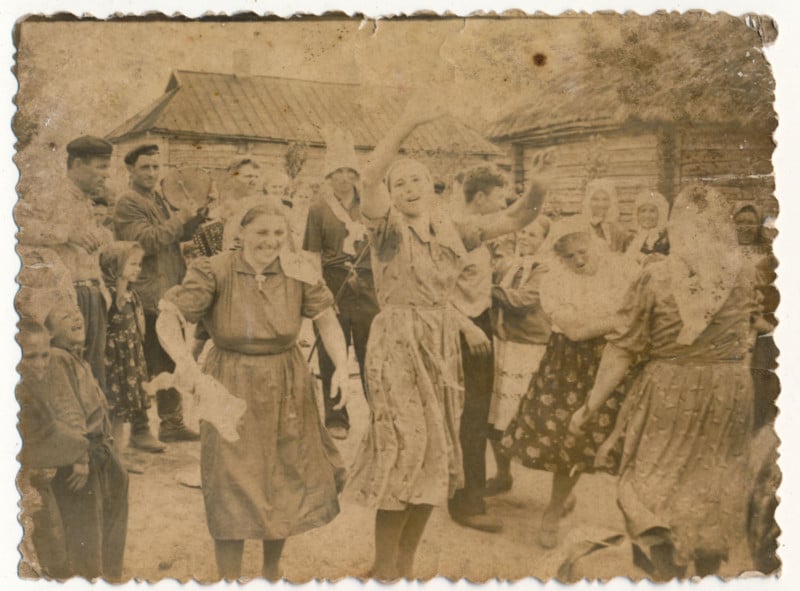 “But when you live there for three months, every morning you go to those abandoned places and see wild animals, listen to sounds of nature, contemplate all around you–there is nothing else in the world, just you and nature,” says Irina. “It is interesting to imagine how these places looked 40-60 years ago. This is an unforgettable experience.”

The photographic couple travels a lot too, and for the last three years have lived in Asia–Thailand, Vietnam. Last summer, they came back to Ukraine to continue their work on the Chernobyl project, as they managed to get funding for a three-month expedition.

Finding the Images is Not Easy

“This project is like an archaeological dig,” says Dondyuk, the finalist of the W. Eugene Smith Grant in Humanistic Photography. “As none of these historical objects were laying clean on a table or a shelf. All of these were lying under a thick layer of mud and trash in abandoned, nearly destroyed houses.

“They were on the floor, under broken furniture, everywhere, so I had to rifle through heaps of garbage to find all these artifacts. Everything was covered with dirt and looked like garbage.”

Before Dondyuk, born three years before the nuclear reactor exploded, goes into an abandoned house and starts searching peoples’ memories, he documents the home or the surrounding area.

Anything and everything in the exclusion zone is considered to be radioactive trash, and the Ukrainian government does not allow its removal. However, Dondyuk has managed to conceal the images at checkpoint searches and “smuggle” them out to help build the lost archive. 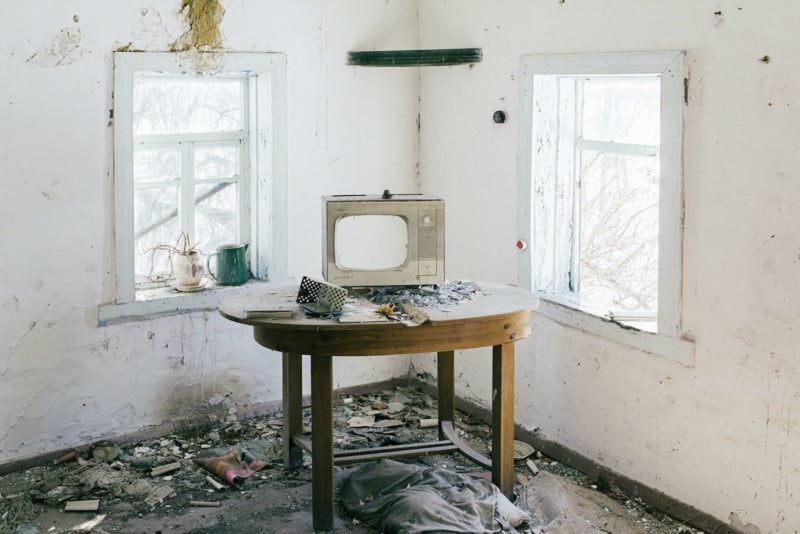 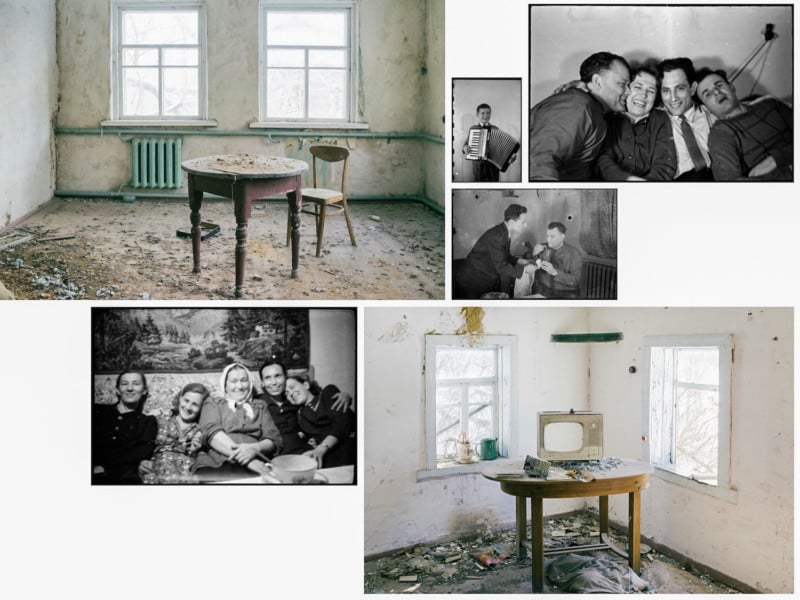 The recovered photos and negatives are digitized on a scanner. Damage, blemishes, and imperfections are not removed or even suppressed in Photoshop. There are very few color films and photos. Most of the images are in black and white as almost no color film was available during the Soviet Era. It was only in the 1990s that color film started trickling in.

Dondyuk (b.1983) has explored almost half of the Chernobyl exclusion zone—every single house in 20 abandoned villages has been entirely covered. Around 15,000 artifacts, including films, photos, postcards, and letters, have been rescued. However, the Russian invasion of Ukraine has put the brakes on his salvage operation. 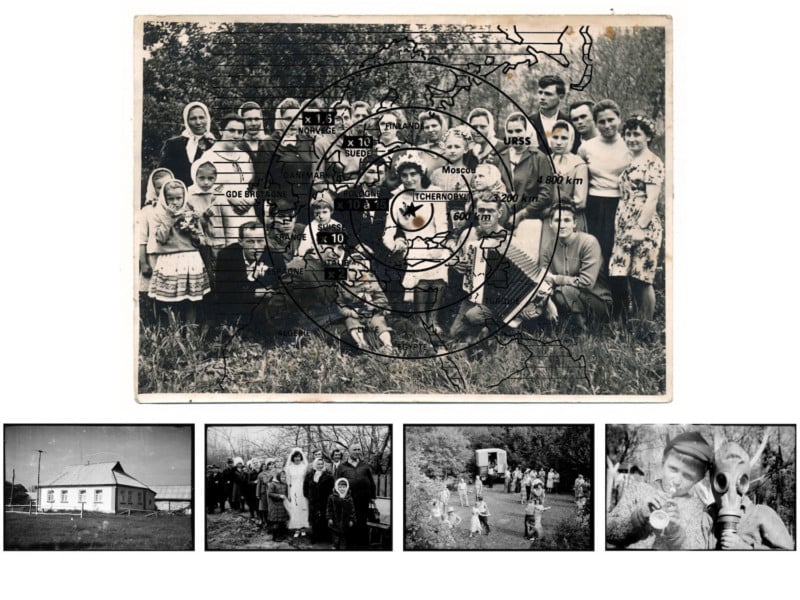 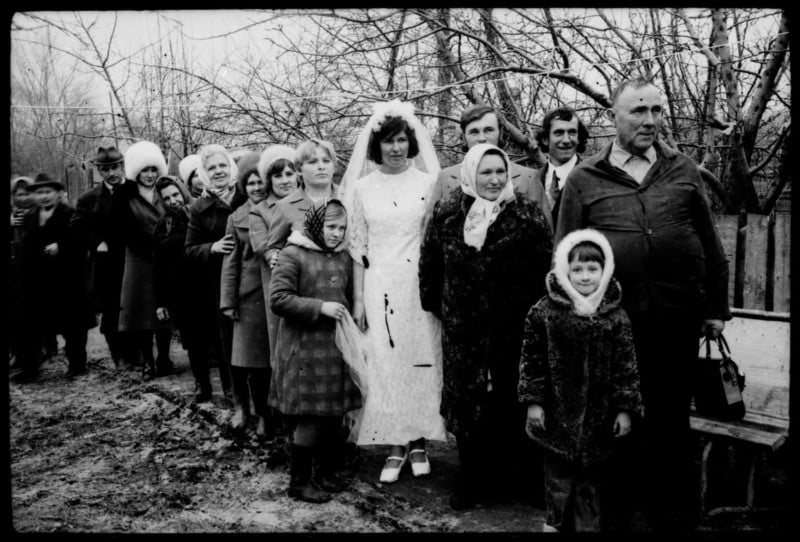 “And I hope this is not the end, and I’ll be able to finish this work in the future when the war is over,” bemoans the Ukrainian photographer. “Every year, all these artifacts are being destroyed by radiation, nature, and natural disasters, such as wildfires, during which many villages are wiped off the face of the earth.

“That is why it is extremely important for me to find and preserve the surviving remnants of the history of this region while we still have something to save. The war doesn’t change my serious attitude toward this project. It has not become less important. But unfortunately, it is not possible to continue my work there unless all this madness ends.” 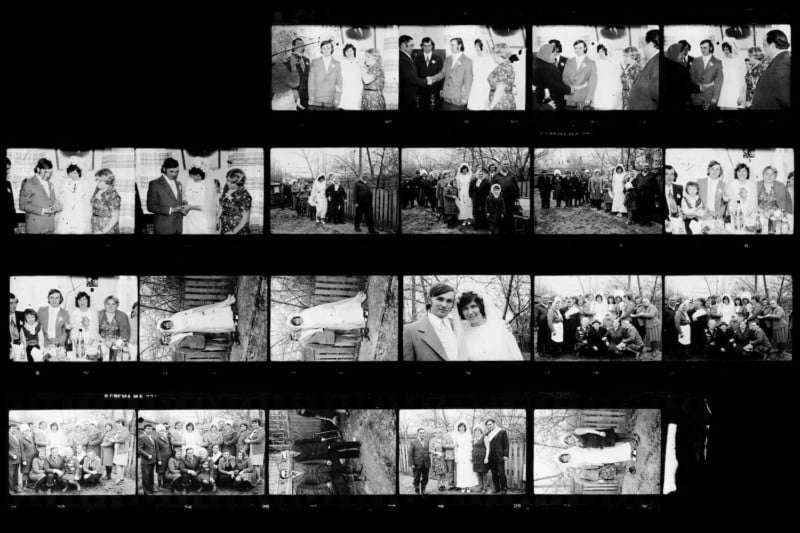 Currently, the couple keeps an Instagram account updated with their finds from the once nuclear wasteland. They have also exhibited at photo festivals in Bogota, Colombia, and Hamburg, Germany.

Once the war ends and a sense of normalcy returns to this tortured land, Dondyuk will go back to searching for more photos and negatives that could result in a multimedia website archive, book, and exhibitions.

“The idea is to explore every single village, every single house in the Chernobyl exclusion zone,” adds Dondyuk.