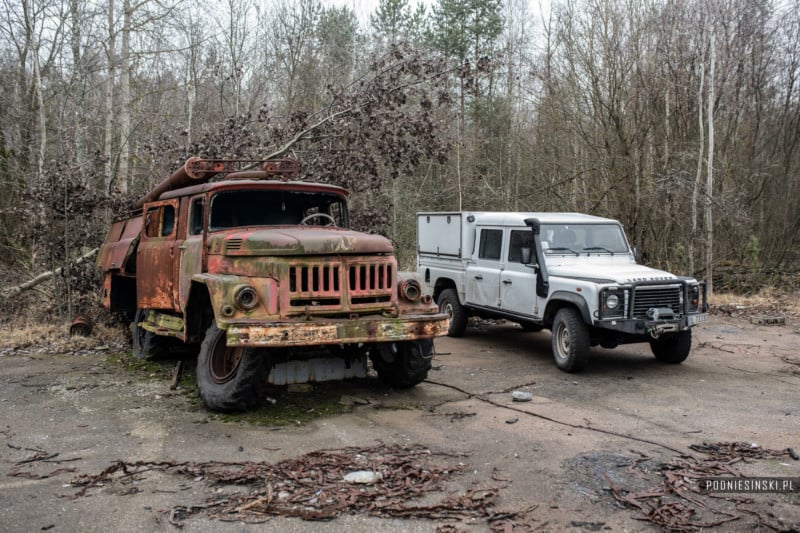 Last year, more than 120,000 tourists visited the Chernobyl Exclusion Zone, and in 2020 that number is expected to double. Mass tourism has forever become a part of the Exclusion Zone, mostly because of the successful HBO series “Chernobyl.”

Over the summer weekends, dozens of buses filled with extreme tourism aficionados show up. As a result, Pripyat is no longer a ghost town. Instead of an eerie silence—which was a staple of the abandoned town not that long ago—now tourists or stalkers can be seen (and heard) illegally entering the zone and committing mindless acts of vandalism.

For these reasons, the best time to visit Chernobyl is in the winter, when the harsh weather and low temperatures effectively deter (for now) the majority of post-apocalyptic sightseeing fans, and provide me with a greater feeling of comfort while working and the ability to freely search for places with an interesting backstory.

Satellite maps are best for these types of searches. You can use them to find inconspicuous buildings hidden amongst dense trees and bushes, which otherwise wouldn’t be visible. Usually, I spend a few labor-intensive days studying these maps before I arrive at my destination, looking for places of potential interest, and then checking them out one by one on arrival.

On average, I find something interesting in just one or two of the dozens of places which I go to. 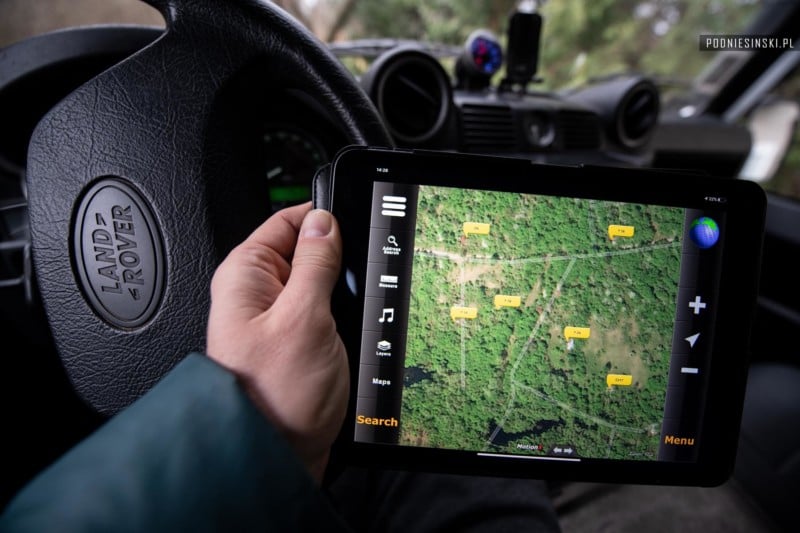 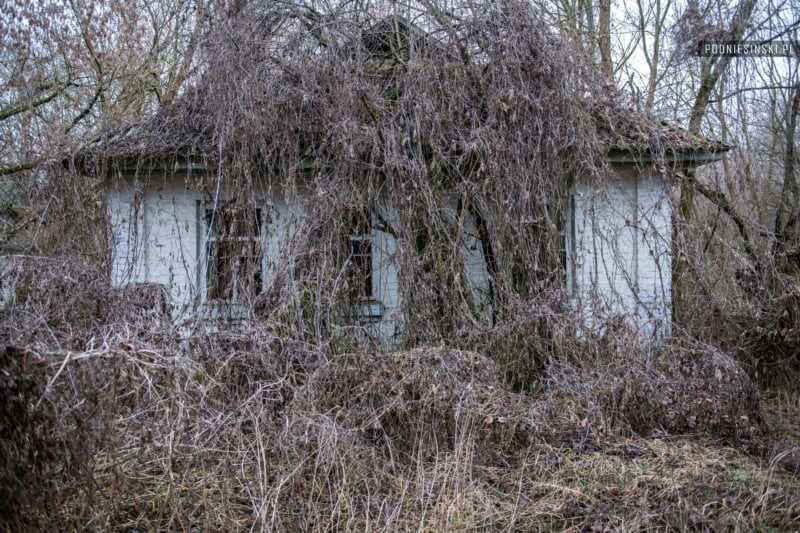 The first abandoned building is off the beaten track, away from the tourist routes. Snuggly surrounded by vegetation from all sides, it effectively hides its secrets. The average tourist has no chance of getting here. They don’t know the location or have the time and permission to do so.

Inside, most rooms are empty. Just as I suspected, the furniture and appliances have long since been removed or stolen. The only thing remaining are documents of no significant value. Hundreds of kilograms of paper waste.

Among them, however, I find dozens of old photographs and rolls of film. Most come from the years 1986-1990, which was the period of cleaning up the consequences of the Chernobyl disaster. They depict the employees standing in front of a newly built sarcophagus, traveling to work by bus or living on floating barges.

Images like these are extremely important historical documents, thanks to which not only can a lot be learnt about the liquidators and their work, but also about the everyday life they tried to lead in those difficult times. As time passes, such photographs become even more valuable, because not only do they set words and images in stone, but they also serve as a way to remember the disaster.

Unfortunately, due to moisture levels, many photographs are in poor condition. Many of them have faded, so it’s difficult to see the details. It’s already too late to save them, but I take measures to secure a few dozen of the best preserved ones against further deterioration. Maybe someday a museum will be interested in acquiring them? 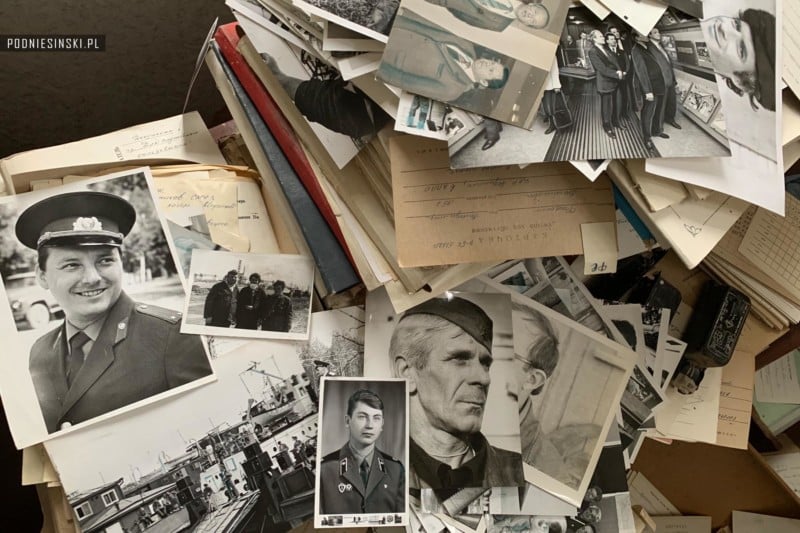 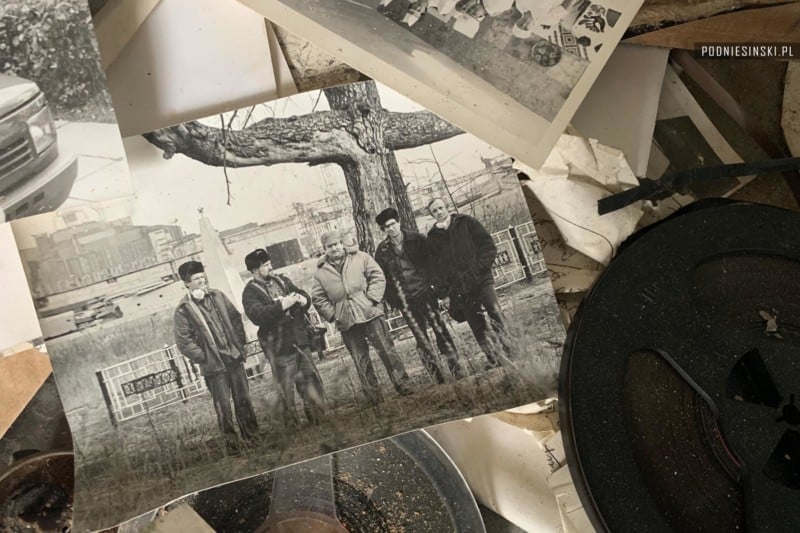 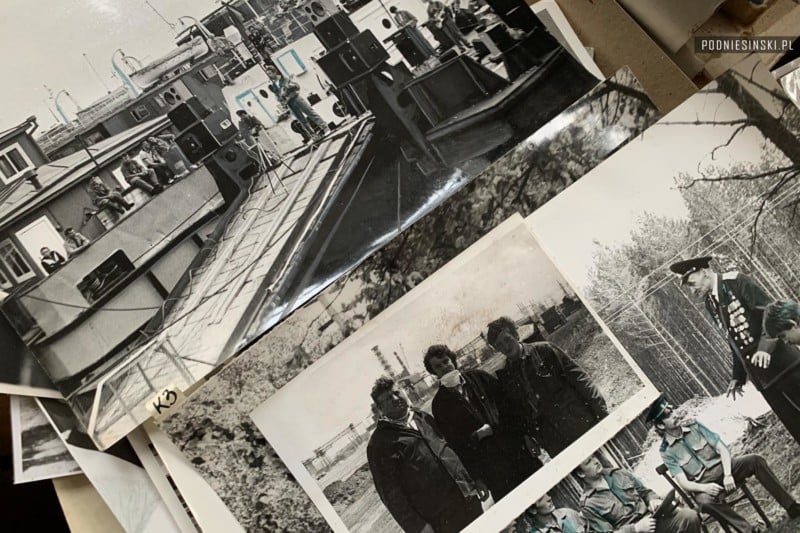 The floor in the room next door is covered by a layer of books and magazines over half a meter high. Among them, I notice a bunch of extremely rare posters. Some of them have never even been unpacked.

All of the posters feature Lenin, communist symbols and propaganda slogans. Lenin’s legacy—blind trust in the state and the mechanisms of Soviet authorities supporting the falsification or concealment of information—significantly increased the tragic consequences of the disaster. 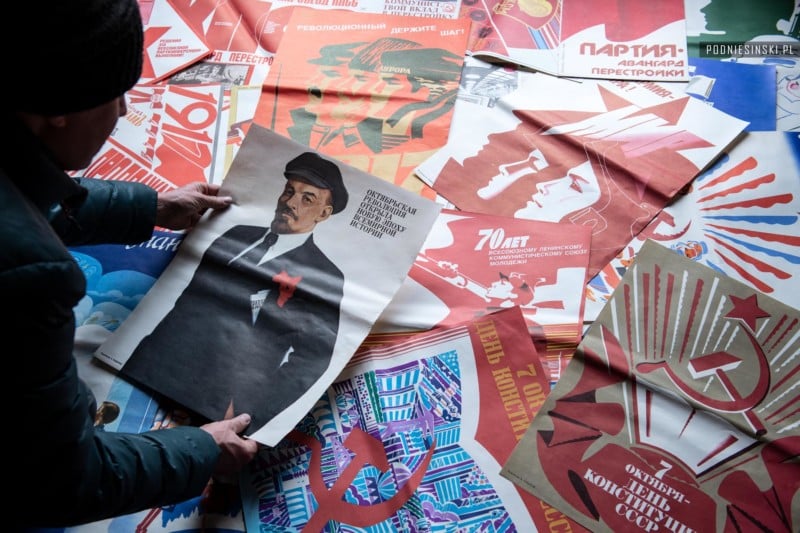 Finding the next interesting building, its use difficult to guess today, takes me less time than before. As soon as I walk into it, I notice piles of documents—one of them, consisting of thousands of folders stacked neatly on top of one another, forms an enormous paper wall 2 meters high and 10 meters long.

Some doors show signs of forced entry, big holes in the doors, through which burglars had gotten inside. It was easier to kick them in or ram them using some type of heavy object, rather than to pick the lock. But not everything was looted.

In the adjacent room, I find hundreds of documents connected to the construction of the Chernobyl power plant. Projects, permits and instruction manuals. Among them, I notice huge blueprints of the Chernobyl nuclear power plant, including the unfinished Block 5. This must have been the archive. Now all this long-forgotten paperwork is scattered throughout the room.

I also find photos here. Interestingly enough, next to them are the newspaper clippings in which they were published. Where did the original photographs, which were later published in the newspaper, come from? Food for thought. 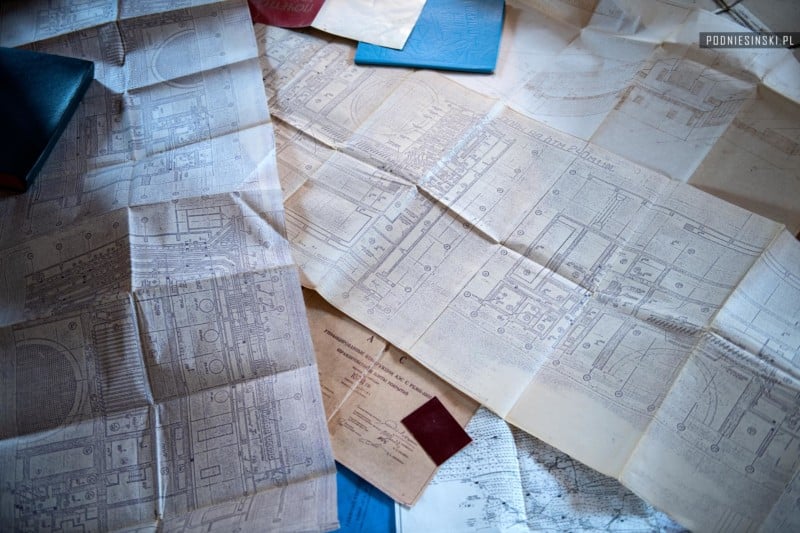 Searching for traces of history in old photographs, documents and posters isn’t the only thing I do during my few days spent in the Chernobyl Exclusion Zone. I also managed to visit some abandoned factories near the power plant.

One of them was involved in the production of reinforced concrete elements used in the construction of the old sarcophagus. After its completion, the factory was repurposed. For what, I’m able to guess, judging by the remnants of chopped up helicopters lying around, which were involved in the clean-up effort. They were most likely brought here from Rossokha (where they were stockpiled) for decontamination, and later to be scrapped and sold because of the aluminum and other precious metals they contained.

Right next to them I find something special: the remnants of the STR-1 remote-controlled robot that cleaned the roof of the building next to the damaged reactor. My dosimeter warns me that the still-attached bulldozer blade—used to throw pieces of graphite, parts of fuel rods and uranium fuel off of the roof—is still highly radioactive.

The robot is one of three that I know of in the Exclusion Zone. I found the second one in 2011 at the radioactive waste site in Buryakovka, and the third can be seen on display in Chernobyl. I wrote more about them in this article. 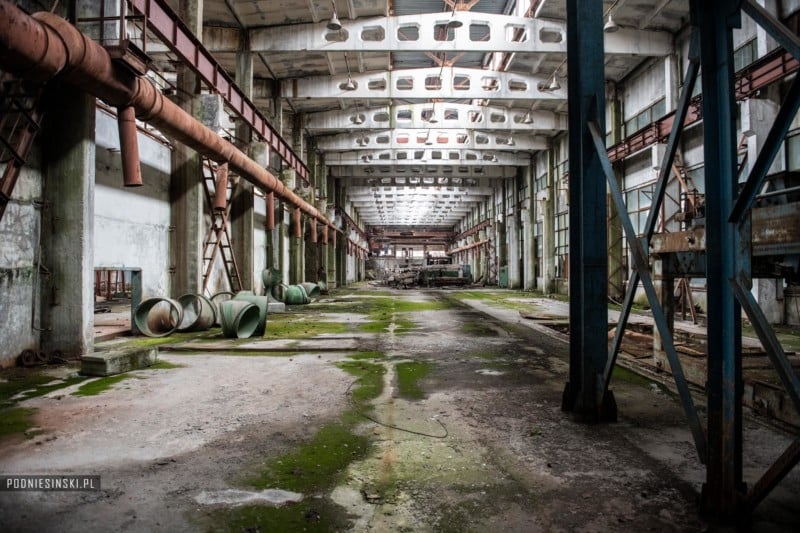 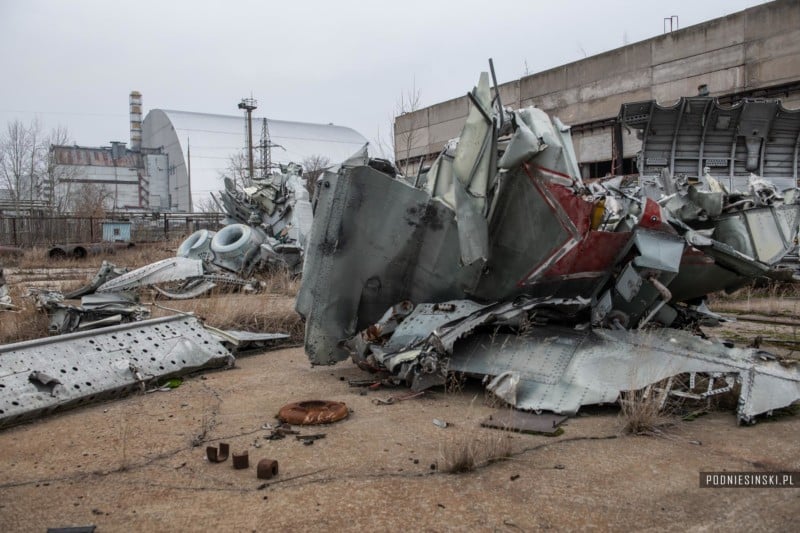 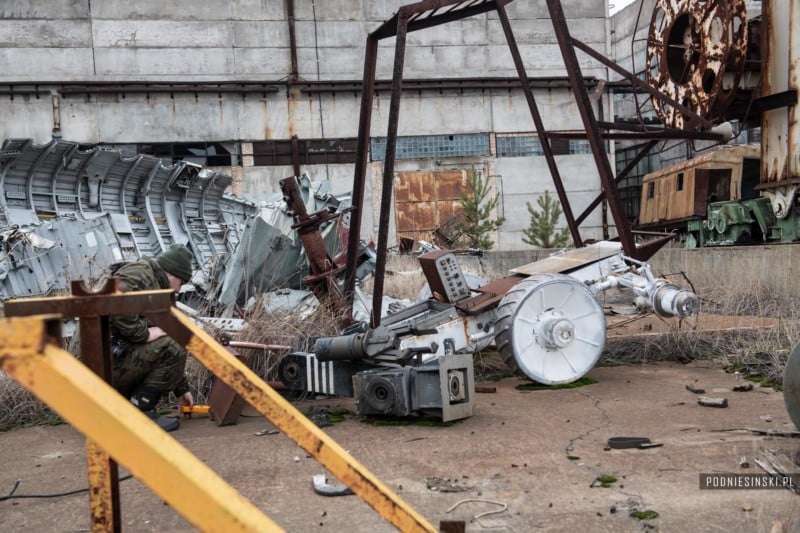 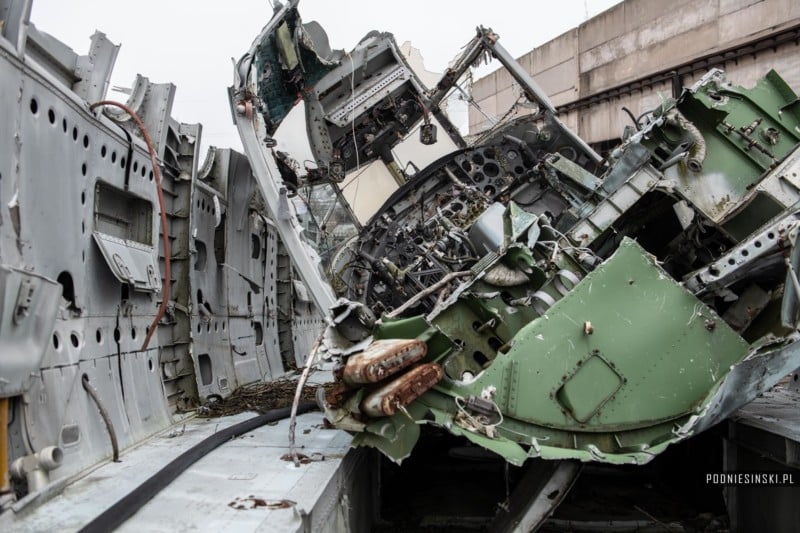 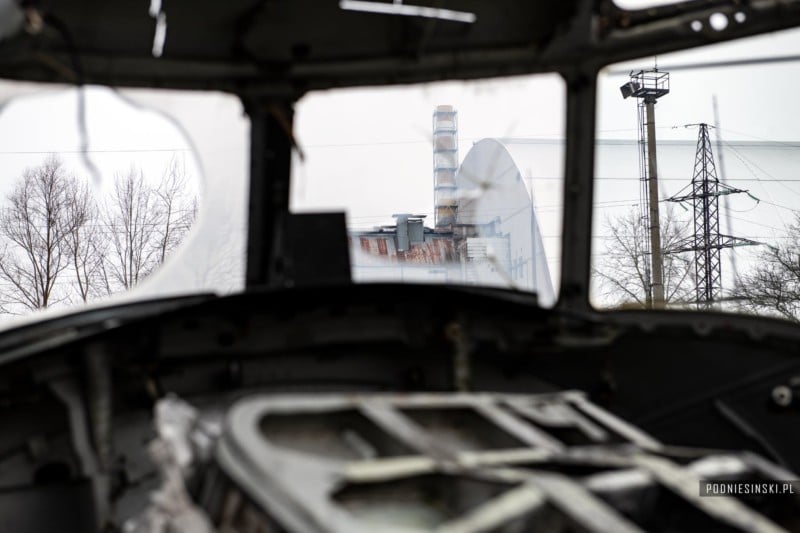 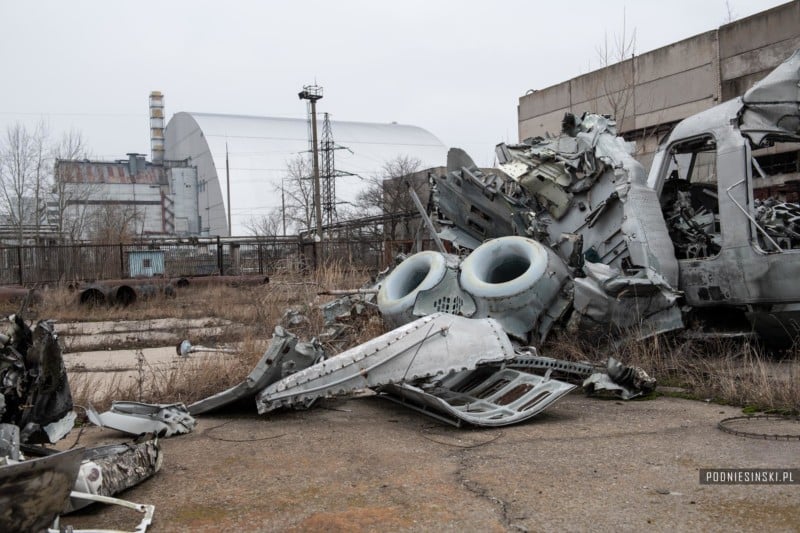 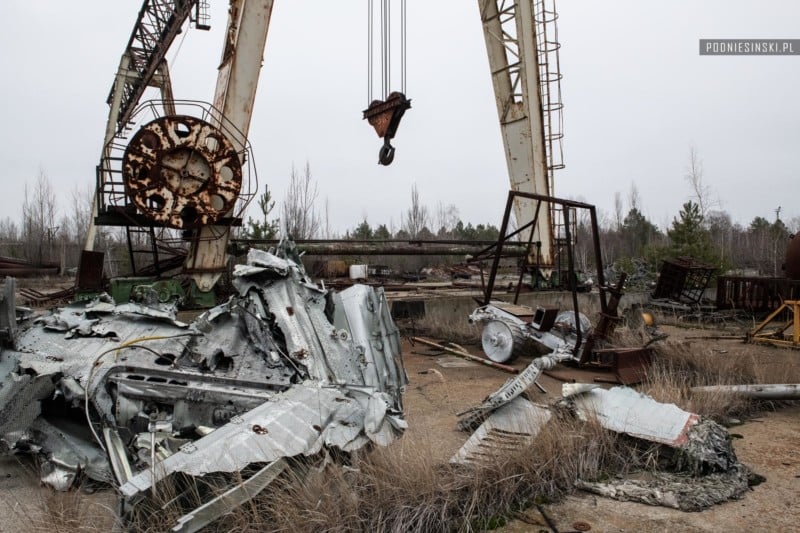 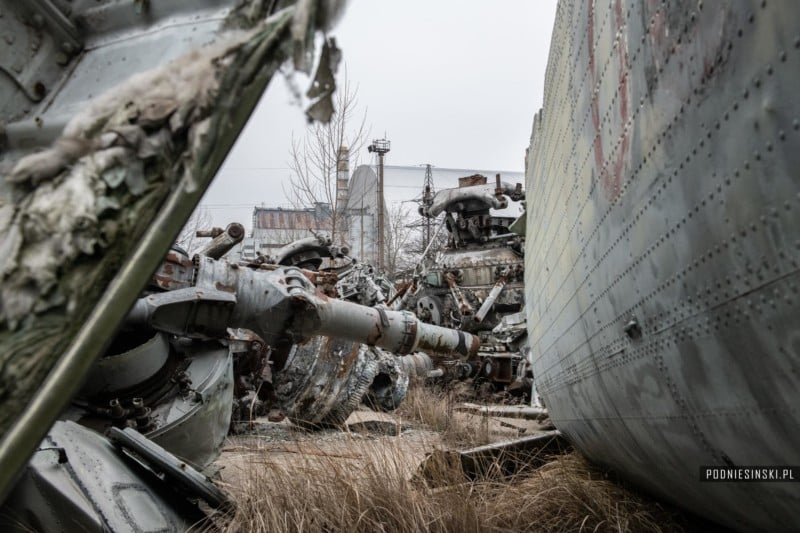 The next day I notice a small lot on the satellite map, with grayish-brown looking objects in the distance. No details are visible, but the elongated shapes resemble vehicles. I decide to check it out.

What I find is a dumpsite full of abandoned buses. Most of them are just vehicle shells, stripped of any valuable items. Hundreds of used tires and other car parts litter the area around them. On some of them I notice lettering which indicates that they were used to transport employees during the clean-up of the disaster’s consequences.

Walking around vehicles and measuring pollution levels, I counted almost 80 of them. Radiation levels are normal. 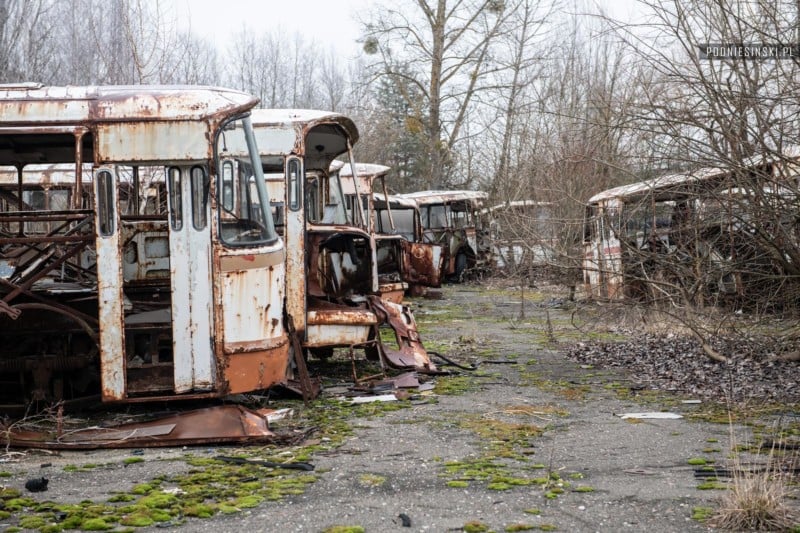 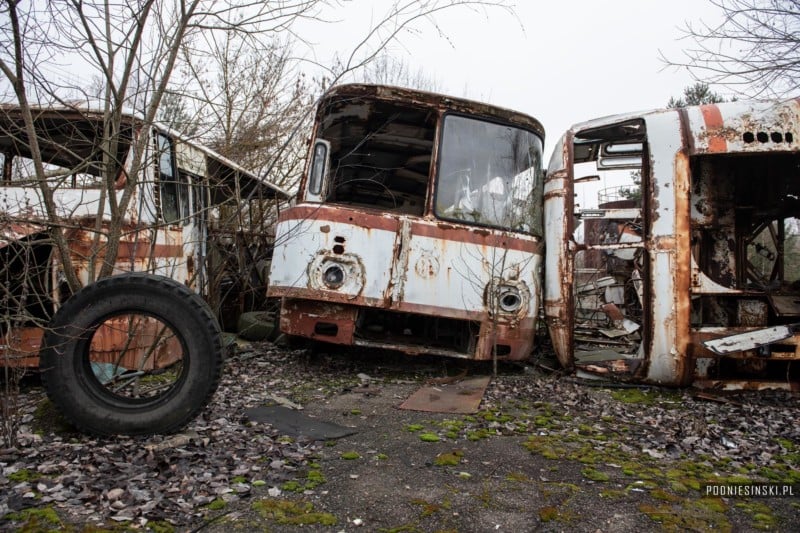 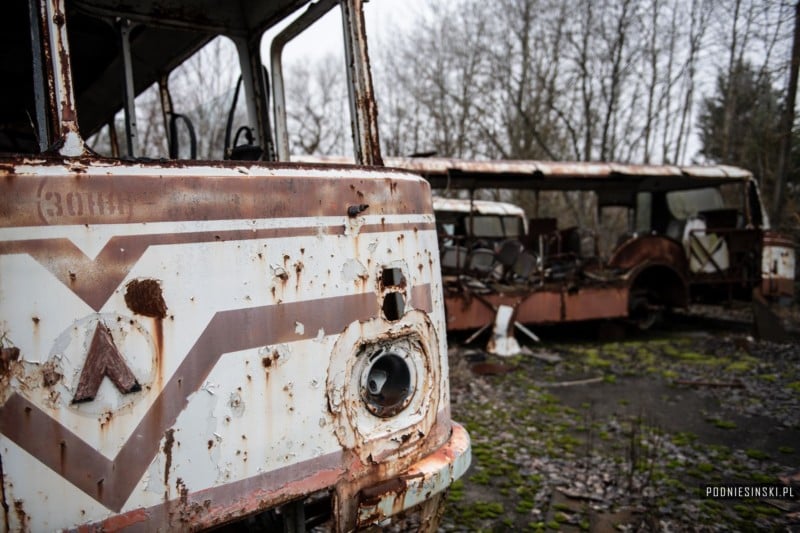 It’s time to head back. I still have a few potentially interesting places to check circled on my map, but unfortunately, I don’t have any more time. Everybody seems to think that they’re easy to find, but that’s far from the truth. Let’s be realistic: what are the chances items that have been left abandoned for over 30 years remain untouched? Most of them have long since been destroyed because of the elements, trampled by tourists or stolen by thieves and vandals.

Despite this, abandoned items are still to be found in many of the Zone’s nooks and crannies. For some, they represent a pile of scrap metal and paper waste with no value whatsoever, and for others they are precious and historical and artifacts documenting the Chernobyl disaster and bringing about reflection on its causes and effects.

About the author: Arkadiusz Podniesiński is a Polish photographer and filmmaker, a technical diver, and a graduate of Oxford Brookes University in Great Britain. You can find more of his work on his website. This photo essay was also published here.