Ian and Erick Regnard are two Mauritian-born photographers who have won big awards for their underwater 4×5 Polaroid photos.

Their work started bacin in 2005 after a friend suggested that they visit an island in the Pacific where you can photograph Humpback whales in water with visibility down to 60-100 meters. The duo spent a year researching the technical aspects of underwater 4×5 photography.

“The process in our heads was fairly simple, get a large format camera, put it in a waterproof casing, go underwater and take some snaps,” Ian tells PetaPixel. “But during our research it became obvious that it was going to be a little more difficult than that.” 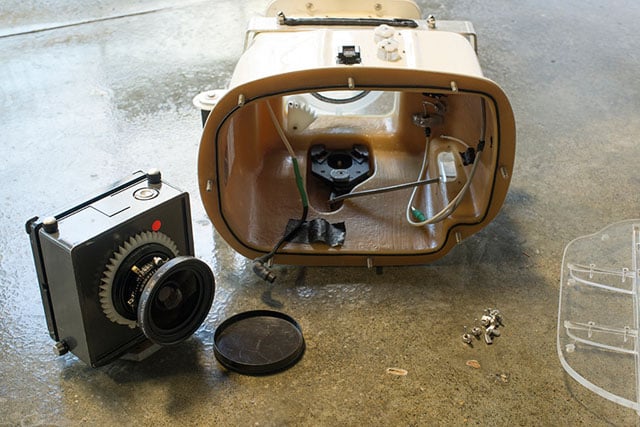 First, the Regnards had a camera modified for them to have enough bellows for a wide range of focus. They then had a special casing built and took their rig into a swimming pool and used a giant ruler to figure out where the camera focused using different lens settings.

“We decide to use Polaroid for this project, and specifically PN55 which gives you a positive and a negative at the same time,” Ian says. “The advantage is that the negative is washed in plain water if need be, so no need to go to a lab when you are in the middle of nowhere!”

Shooting with large format film underwater means that you can only do one exposure at a time before having to climb back up into the boat to replace the film.

The camera housing was so big that they needed to weigh it down with 15kg just to make it sink. Erick would figure out his focal plane by extending a measuring tape underwater.

So far, the duo has photographed sharks, stingrays, and models underwater, shooting in Tahiti for 3 weeks, 8 hours a day and 1 photo per hour. Their work was honored at the International Photo Awards (IPA) in the “special category in 2010.

To Get Better at Lighting, See Light Through the Eyes of a Cinematographer

Searching for a Trophy Buck in Street Photography