Beachgoers in Argentina sparked outrage around the world last week after purportedly killing an at-risk baby dolphin by passing it around for photos. Now a similar video has emerged from Palm Beach, Florida, and this one is sparking new debate.

The 1.5-minute video above shows a man pulling a shark from the water and posing for photos with it before setting it free.

WPTV, which published the video, reports that the ~5-foot blacktip shark was hook by a fisherman over the past weekend and then dragged to shore. A man then poses with the thrashing shark after subduing it in the sand. 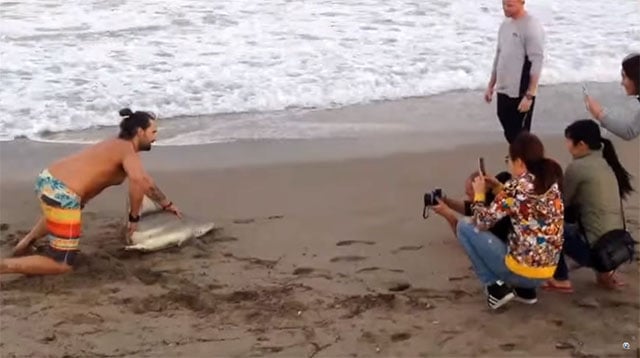 The video has been viewed millions of times on YouTube and Facebook, and like the recent baby dolphin video, there are very loud critics speaking out against it:

Unlike the dolphin incident, however, there are also many people who are defending the man’s actions and saying that he did nothing wrong:

Authorities seem to agree. The Florida Fish and Wildlife Conservation Commission says the man’s actions are perfectly legal. This activity is also not uncommon in the area among fishing enthusiasts.

“There’s nothing legally wrong with this,” Florida Atlantic University professor Stephen Kajiura tells WPTV. “This is what some people do for their hobby. They have fun with that.”

The fisherman were also reportedly careful to return the shark to the water within 90 seconds of dragging it out.

These Dogs Were Trained to Be Studio Photographers