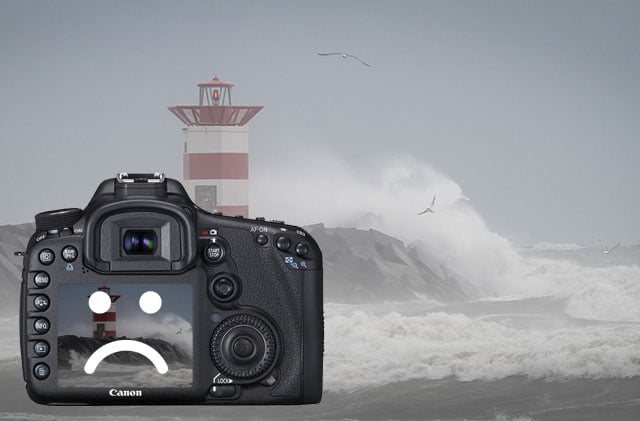 On July 7th, 2015, wind speeds of over 120km per hour (~75mph) reached the Dutch coastal area. Winds were so extreme that restaurants along the beach were covered in a thick layer of sand, making them look like small sand dunes.

A significant part of my job as a news photographer is covering daily life to, as they say, “feed the beast”. There aren’t always memorable news events happening, so covering things like the weather becomes an important part of your work.

Before heading out I made sure to cover my lenses in plastic (i.e. taping shopping bags around them tightly). I don’t cover the camera bodies as I’ve come to trust their weather sealing capabilities of years photographing in nasty weather.

During the shoot in the midst of the storm I even dared to use my flash, a cheaper version of Canon’s 600EX made by the Chinese company Yongnuo. The Yongnuois less than half the price of the Canon and probably delivers 90% of the performance. Most surprisingly, it is very durable, something you would not readily expect when made in China as copy product. Other than the fact that the hot shoe doesn’t fit very tightly, leaving some room for wiggling, I can’t say anything bad about it.

Of course I put sealing tape around the hot shoe and on all parts of the flash I deemed vulnerable for water entry. Some rain and sea water still managed to get in though as you can see in the image below. To this day though the flash still works perfectly.

Sea and rain water did find it’s way inside my trusty 70-200mm f/4L at the end of the day. I noticed it several hours after arriving back home when the water inside started to condense and fog the inner lenses. Immediately I wanted to test the lens but it did not respond at all.

At this point I figured perhaps it was wise to rid the gear of salty water residues by rinsing it in tap water.

As salt may contribute to corroding the rubber on the outside of the camera I wanted to clean them easily and quickly. I figured that after surviving a storm and a few full immersions in sea water from 6 meter high waves, a bit of tap water couldn’t hurt.

After the gear shower, I dried everything off and laid the cameras and lenses by the heating to dry.

The next day I wanted to test everything to see whether would be any problems. My 1D Mark II and 16-35mm worked perfectly. No condensation was visible inside the 16-35mm either. In the 70-200mm, however, there seemed to be the same amount of condensation as the day before. The top display on the 7D would blink and fade away after turning the camera on. After that it just became totally unresponsive.

I took a quick trip to the supermarket and bought two of the biggest, cheapest bags of rice I could find. Back home, I took two large Ziploc bags, half filled them with the rice and inserted the 70-200mm into one and the 7D into the other.

Perhaps I was a bit too positive in my attitude, as 24 hours later neither the lens or the 7D worked at all. Three days later still no response from either one.

As a photographer above all you learn that patience is a virtue — that things just take time. With this in mind I decided not to give up on my gear and let it sit in the bags with rice for a while. Finally it took about two or three weeks after leaving the 70-200mm in the bag of rice with the lens mount detached from the cylinder for the condensation to disappear. But the autofocus still wasn’t working.

As for the 7D there wasn’t much luck. It took almost two months for it to come back alive. In small steps during the weeks several things started working again. First after turning the camera on you could hear some faint, electronic noises coming from inside. A few days later the shutter would go off repeatedly after pressing the shutter button only once. Finally the back screen started working again along with the menus. The top LCD was ruined and so was the viewfinder display module so no camera info was visible when looking through it.

The most pressing issue was the fact that no matter what lens was attached a “check lens communication” error appeared on the rear screen. There was no autofocus possible and you could only take a photo using live view. After each photo the message would reappear and I had to turn the camera off and on again.

In the meantime I just worked with my 1D Mark II switching lenses a lot during shoots and collecting tons of dust on the sensor. When I finally decided I would try and see how much fixing my 7D would cost I got the worst news: the motherboard would have to be replaced and even then it wasn’t sure if it would ever become fully functional again.

Miraculously my local Canon guy got the camera working again to the point where you could take subsequent photos without error messages appearing. The top LCD remains broken but you can manual focus and take photos in live view as before. Having the motherboard replaced costs about as much as buying a second hand 7D, so I opted to leave the camera to be used for parts.

Below you can see the extent to which the camera’s internals were hurt by the storm. A big part of the reason I suspect this happened is that the 70-200mm does not have a rubber seal on its mount and the 7D sealing overall is not of the same caliber as the 1D. Both were exposed to full immersion of crashing waves and lots of rain, but only the later survived without any damage. I never knew the 70-200mm doesn’t have a rubber seal as I thought it was standard on all L lenses. As much as I love the 7D for it’s responsiveness, its light weight, and great colors, I think I will stick to 1D series for now.

About the author: Jaap Arriens is a photojournalist based in The Netherlands and Poland. He is represented by represented by Hollandse Hoogte, Holland’s largest photo agency. You can find more of his work and writing on his blog, Flickr, and Corbis. This article was also published here.