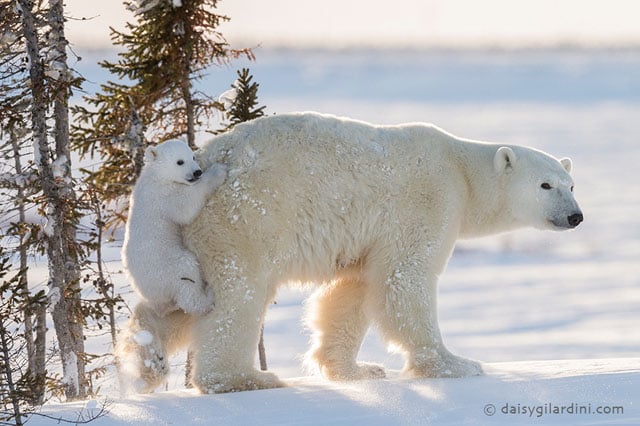 Every year from mid February to mid March a big event takes place at Wapusk National Park in Manitoba, Canada. The polar bears mothers, who entered the maternity dens in October to give birth to their cubs in November, are ready to exit for the first time with the four months old newborn.

Last year, I spent 13 days in the field and waited for 117 hours in sub-zero temperatures in front of a den in order to capture photos of the young families.


When the time comes, polar bear mothers know that on the Hudson Bay pack ice, the seals are giving birth to their cubs and that means easy food for them. On the other hand it is extremely difficult and rare to witness the exit of the bears from the dens, and a photographer has to face extremely challenging conditions.

My expedition was from February 17th to March 3rd, 2015, and I spent 13 days in the field, shooting with an 800mm super telephoto lens (and sometimes with a 1.4x teleconverter.

I spent 117 hours waiting in front of a polar bear den, with 60-70 km/h gusts of wind and average temperatures of about -50°C to -45°C with wind chill. In the end, I had 12 hours of effective shooting and 5 different polar bear sightings.

In this particular episode the mama bear was resting with her two young cubs in a day den on the way to the pack ice. Day dens usually consist in wind-protected areas as snowdrift refuges or tree shelter. 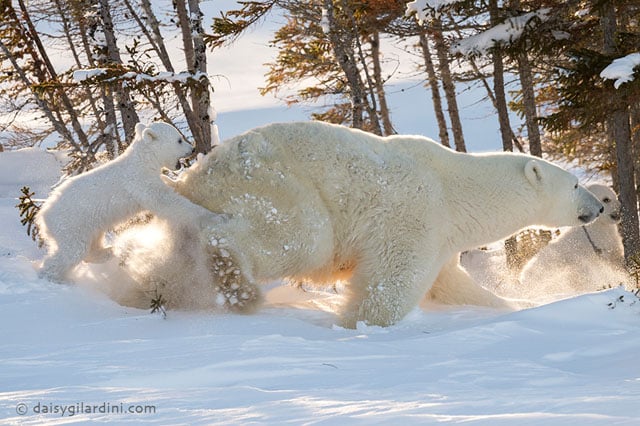 She was extremely calm when our vehicle reached the location and we could photograph her and the cubs for a few hours before she suddenly decided it was time to leave. She rushed downhill in deep snow when one of the two cubs decided it was much more convenient to hitch a ride on mama’s behind. He jumped and reached out holding on with a firm bite on mama’s fur backside: an extremely funny and totally unexpected behavior. 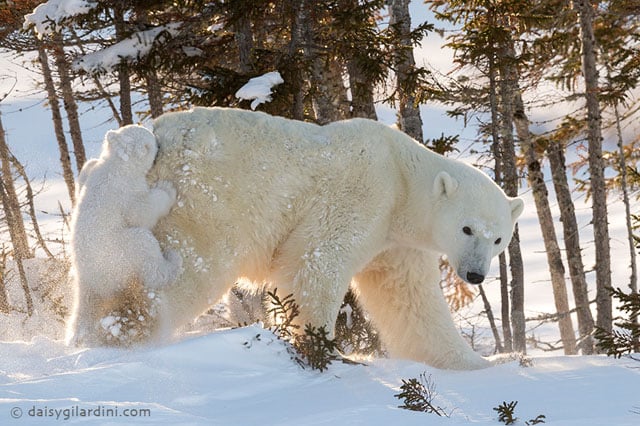 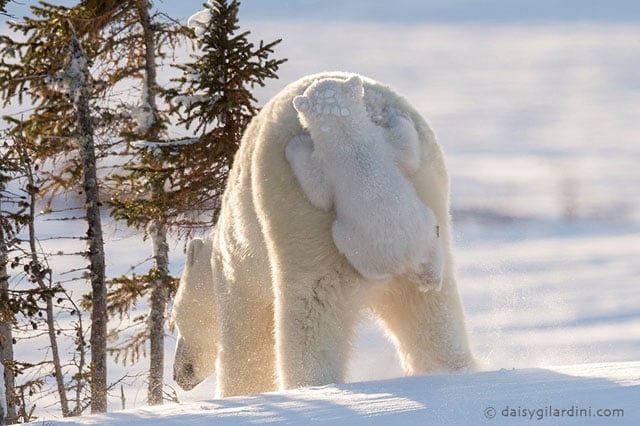 Wildlife photography is all about patience and perseverance but despite the challenging conditions and the long hours waiting, the experience of witnessing something so rare is simply priceless!

About the author: Nikon Ambassador Daisy Gilardini is a wildlife photographer specialized in Polar Regions. In almost two decades of polar explorations she joined over sixty expeditions to Antarctica and the Arctic. Daisy’s images have been published internationally by leading magazines and organizations, and awarded at the most prestigious international photo contests. You can find more of her work on her website and Facebook page.