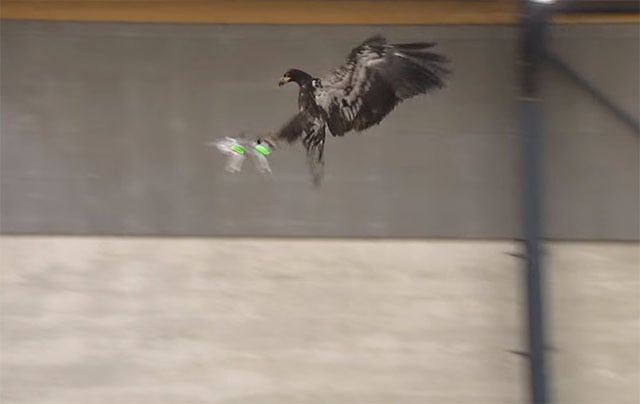 Forget anti-drone rifles and drones that catch other drones with webs and giant nets. Police over in The Netherlands have just come up with the craziest way to deal with illegal drones: specially trained eagles.

The Dutch National Police proudly announced yesterday that it’s the first police force to employ eagles to help combat rogue drones. They partnered with a raptor training company in The Hague to try out the birds for this purpose.

In addition to snatching a flying drone right out of the air, the eagles have learned to fly the neutralized drone to a space area away from people before landing. One of the big problems with other drone countermeasures is figuring out how to prevent a disabled drone from falling onto people’s heads below.

One of the main issues that needs to be addressed with training anti-drone eagles is the safety of the birds. The spinning propellers have been known to cause major injuries when they come in contact with people, so they undoubtedly can cause major damage to an eagle’s body if the take-down isn’t done perfectly. Authorities say they’re looking into protective measures for the birds.

The Dutch Police say they’ll be testing this system in the coming months before deciding whether eagles are an acceptable way to deal with problematic drones.

(via Dutch National Police via IEEE Spectrum via Engadget)

Moving Portraits of Hollywood Celebrities at the Sundance Film Festival