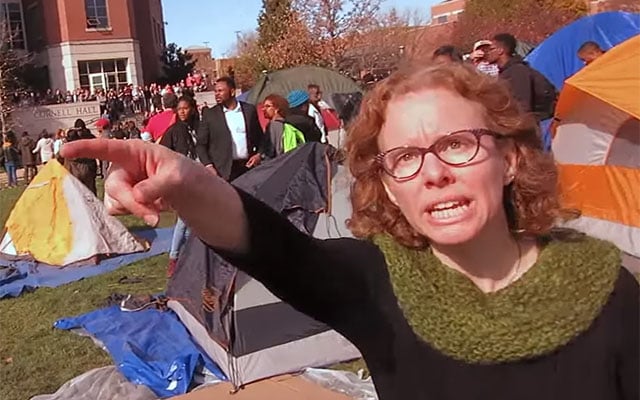 Remember Melissa Click? She’s the University of Missouri professor who sparked an outcry after being filmed confronting photojournalists and calling for “muscle” to remove them from a public area during an on-campus protest in November 2015.

Well, Click was charged with assault yesterday for her actions.

After the initial controversy subsided, the story took a curious turn and became a public battle between state lawmakers and the faculty of the university.

Over 100 Missouri lawmakers signed an open letter earlier this month that called for Click’s immediate firing. “[Click] displayed such a complete disregard for the First Amendment rights of reporters should be enough to question her competency and aptitude for her job,” the lawmakers wrote.

In response, over 100 faculty members at Mizzou signed and published an open letter in support of click. “We believe that Click has been wronged in the media by those who have attacked her personally and have called for her dismissal,” the letter said.

Click hasn’t gotten fired, but she did get charged with third degree assault yesterday. In addition to calling for muscle to deal with the photojournalists, Click was also caught grabbing a reporters camera and helping to organize the human circle that kept journalists out of the campus quad.

The Missouri Times writes that lawmakers took this new charge as another point for their case that Click should be fired. At least two of them weighed in on Twitter:

Melissa Click charged with assault… Your move Chancellor/Board of Curators…. It's already past due.

I'm starting to think that being a Mizzou professor has the best job security in our state. You may literally do anything & keep your job.

.@Mizzou has a chance to do the right thing & #firemelissaclick. If they fail to do so it is beyond tone deaf https://t.co/Y9iw5CGmot

“While the University of Missouri seems to have no accountability for their professors and their actions, the Missouri criminal justice system does,” says State Representative Caleb Jones, who has led the effort to call for Click’s dismissal. “I hope that justice gets served to the fullest extent of the law.”

The Class C misdemeanor charge Click faces could be punishable by up to 15 days in jail and/or a $300 fine, reports The Missouri Times.

In a poll we ran earlier this month, which received over 1,400 responses, more than 85% of respondents believe that Click should be fired for her actions.

Update on 1/27/16: Mizzou’s chancellor says he’s not going to rush to fire Click. He says due process must play out for the tenured professor.

Update on 1/28/16: Melissa Click has been suspended from her duties by the University of Missouri.

Olympus Unveils the PEN-F, A Retro Camera Reborn for the Digital Era