Earlier today, we shared a viral video of student photojournalist Tim Tai being confronted by activists while photographing the ongoing University of Missouri protests. One of the main people under fire for their actions in the video is Melissa Click, an assistant professor of mass media.

Cameraman Mark Schierbecker has just posted a longer version of his video (embedded above) that shows Click’s role in the human media blockade more clearly.

At 7:10 in the video, after Tai has been shooed away by the protesters, Schierbecker finds himself in the center of the camp, which has been set up on public property. Turning to Click, he identifies as media and asks to speak to her. Here’s a summary of the exchange between the two:

After Schierbecker is escorted out of the perimeter, Click makes the rounds to keep the media blockade going.

Click: Don’t let those reporters in. [Sees Schierbecker outside the circle]. Oh, he’s a good one. Good one! Good job! [Turns back to the students] If you have to go, find somebody to take your spot.

As the video started going viral, the public began speaking out against Click’s actions and calling for her firing/resignation:

Official statement: I will not allow students to silence dissent by becoming a human meat wall that rolls over journalists doing their jobs.

@melissaclick was that you on the video calling for "some muscle" to remove a student journalist from a public space?

As a university administrator, an educator and a journalist, I find the behavior of @baslerjd and @melissaclick deplorable.

How do you not fire @melissaclick #MelissaClick, @Mizzou #Mizzou – She can’t be allowed to teach communications https://t.co/OEIiGXknSz

Some angry people have taken things too far:

Have learned that some people in the video with me are getting death threats. That's unacceptable and sickening.

My personal intention has never been to vilify the people in the video and I'm not sure why anyone thought it was OK to send them threats.

Missouri Lieutenant Governor Peter Kinder issued a statement today about the treatment of photographers and reporters.

On Sunday I stood by the rights of protesters to have their voices heard while also urging the need for governance by University of Missouri leadership. Today, I’m standing for another First Amendment right, the freedom of the press. Actions on Monday by University faculty and staff to infringe on students’ First Amendment rights directly contradict what is taught at our universities. This incident must be examined, and if found necessary, disciplined.

Faculty and staff cannot be allowed to pick and choose which rights, viewpoints and freedoms they respect. I renew my call to restore law and order on campus, so the rights of all are protected. The University of Missouri is funded by taxpayers. It is imperative that it be a place where freedom is paramount and all voices are heard.

Update: Click has issued a statement apologizing for her actions: 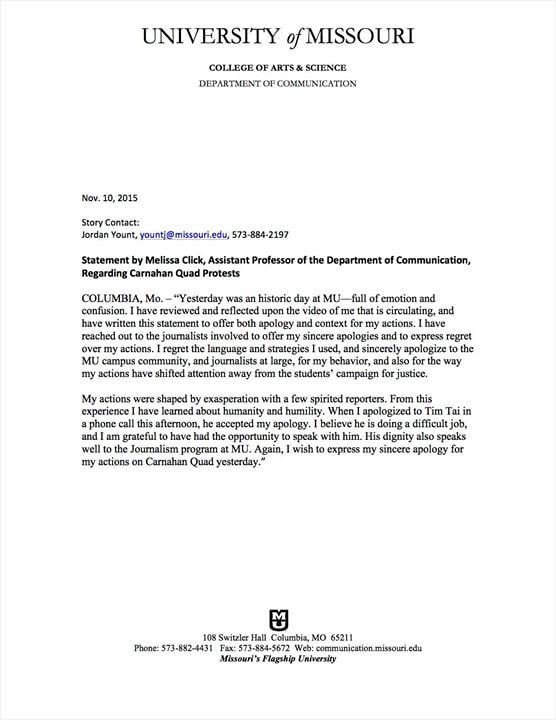 Update on 11/11/15: Click has resigned from her courtesy appointment in the Missouri School of Journalism.