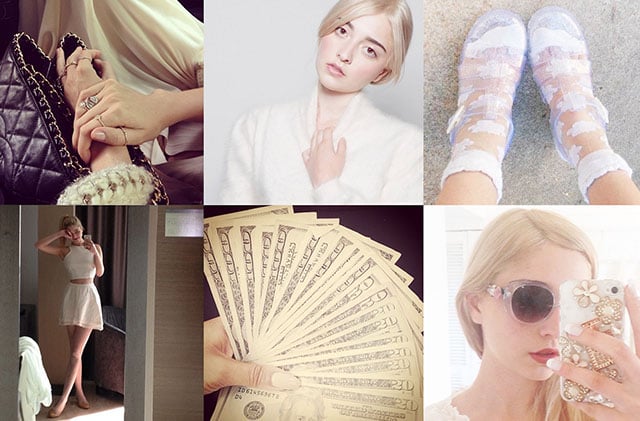 With tens of thousands of Instagram followers, Amalia Ulman is something of an Instagram celebrity. She regularly posted photos of herself “living the life,” posing on hotel beds, wearing haute couture, and eating haute cuisine.

But what her photo fans didn’t know was that everything was fake — it was all a performance art piece for a project titled “Excellences & Perfections.”

The Telegraph calls the work “one of the most original and outstanding artworks of the digital era.” The project began in April 2014, and it appeared that Ulman, who studied fine art in London from 2008 to 2011, had jumped headfirst into the superficial Instagram popularity contest with her account, @amaliaulman.

I haaaaaaaate when frinds mske me wait; always on time for nothing >__<

today wasnt a good day but u gotta keep strong

Ulman underwent a breast augmentation operation back in July 2014 — that was fake too:

nervous and excited!! Getting 450cc high profile anatomical silicon gel… Massive butterflies n anxiety. Im sure i'll b fine. And THANK YOU for the warm wishes!! I appreciate ALL the support!!

date yesterday….still recoverin #dont #touch #me #yet lololol lov the dress tho

“Everything was scripted,” Ulman tells The Telegraph. “I spent a month researching the whole thing. There was a beginning, a climax and an end. I dyed my hair. I changed my wardrobe. I was acting: it wasn’t me.”

She ended the performance in September 2014. Now, a year-and-a-half later, Ulman will be exhibiting some of the 175 photos she made for “Excellences & Perfections.” One show will be held at the Whitechapel Gallery in east London, and a second will be at Tate Modern.

Ulman says that her goal with the photos was to prove that “femininity is a construction, and not something biological or inherent to any woman,” she tells the Telegraph. “But I also know that photos of half-naked girls get a lot of ‘likes’.”

12 Photographers Shot Portraits in the Same Room, and This is What Resulted

Ep. 41: How NOT to Look Creepy Taking Photos in Public – and more