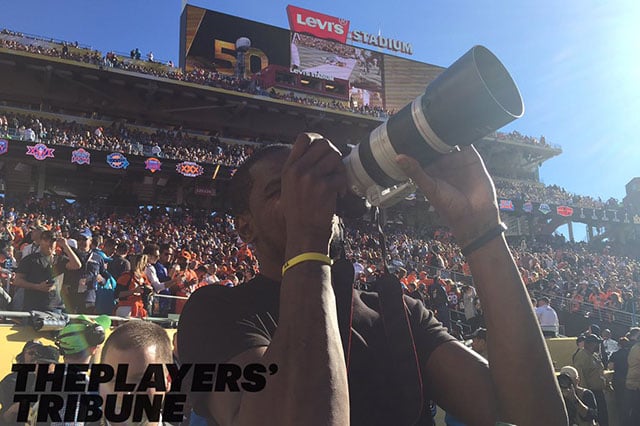 Guess who was on the sidelines photographing Super Bowl 50 yesterday? Kevin Durant.

The NBA star (and MVP two years ago) was a credentialed photographer at the championship game, shooting for The Players’ Tribune. One day earlier he was shooting basketballs against the Golden State Warriors at nearby Oracle Arena in Oakland.

Durant has watched the Super Bowl every year since he was a kid, and he was overjoyed when he was offered a press pass for the game.

“When I was invited by The Players’ Tribune and the NFL to be a credentialed photographer on the sidelines during the Super Bowl, I said ‘I’ll do it’ before they even finished their question,” he writes.

He was photographing with a Canon 7D — one that he had gotten for his birthday earlier this year, and one that he almost left at home while rushing to catch the plane.

Durant joins baseball stars Ken Griffey Jr. and Randy Johnson as athletes who have a passion for photography.

Last night, @KDTrey5 was shooting the lights out of Oracle.

“I learned a few things while I was scrambling to take photos,” Durant writes at The Players’ Tribune. “The first thing is: you have to keep your wits about you. It’s a safety thing, man. As you’re looking for good pictures, and scoping things out through your lens, you have to be aware of the action on the field.”

“Another thing is: I’m learning how tough these action shots are to get … they happen so fast. It’s hectic following the action, then checking your settings in between plays. It’s a lot of guessing and adjusting as you go,” he continues. “One trick I was using to make it easier on myself: I’d predict if it was going to be a run or a pass and then focus in on just one player for an entire play.”

Kevin Durant is on the clock as a photographer at #SB50: https://t.co/wFzqfRkBjm pic.twitter.com/YUN0zZfDci

Kevin Durant @KDTrey5 is a field photographer in front of me – for real! pic.twitter.com/y74LBAoYTP

Here’s a short clip of NFL cameras spotting Durant with his DSLR behind the end zone:

Other athletes were excited about Durant’s new direction:

saw bro @KDTrey5 snapping pics of the Super Bowl for the @PlayersTribune.. Need to see how the photos came out lol

Who else is excited to see KD picture?

Durant has new found respect for professional photographers after spending an afternoon in their shoes.

“The biggest thing I learned is something I knew on a certain level … but didn’t know until tonight: that sports photography is hard work and it takes a lot of skill and focus in a crazy atmosphere with a lot of distractions,” he writes. “I have a ton of respect for the people who do this as a profession.”

Here's a sneak peek of how #SB50 looks through the ? lens of @KDTrey5. pic.twitter.com/uyuJvypMHc

If you’re itching to see more the photos Durant left Levi Stadium with, a large gallery has been published over at The Players’ Tribune.

This is How Some Photoshop Tutorials Are Annoying