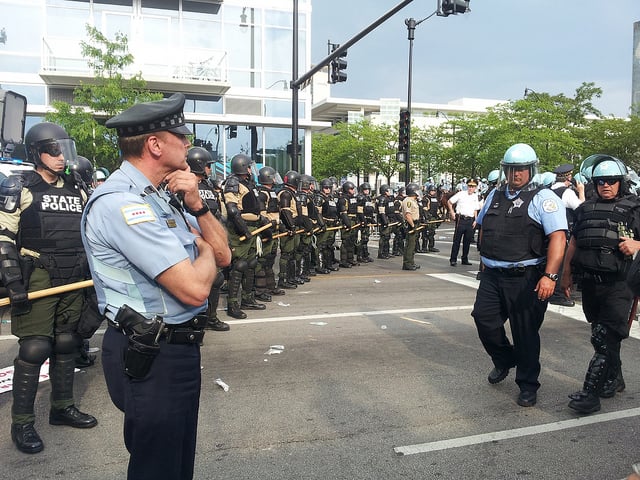 The city of Chicago has agreed to pay $100,000 to a photographer who was beaten by police officers during the 2012 NATO summit, causing the destruction of one of his cameras.

WBEZ reports that Getty Images freelance photojournalist Joshua Lott — whose Instagram photos we featured back in 2013 — had filed a federal lawsuit that named 6 Chicago Police Department officers as defendants.

Lott says that on May 20th, 2012, as he was shooting a protest downtown during the NATO summit, he witnessed officers beating a young man with batons. When the officers noticed Lott taking pictures, they ordered him to leave, but Lott stood his ground, saying that he was a photojournalist shooting for Getty.

After beating the young man some more, the officers turned their attention to Lott, taking him to the side of the road, throwing him to the ground, and then beating and stomping him in the same way as they did the young man, Lott says.

One of the officers then allegedly took Lott’s camera and slammed it to the ground “like a football spike,” destroying it.

In its settlement, Chicago has agreed to fork over $100,000 to Lott for what transpired, but it and the police officers deny wrongdoing and liability.

These Pro Product Photos Were Shot in a Bathtub